When Mad Men aired its second episode of the season, viewers blanched to see character Betty Draper, a frustrated housewife with no personal or professional outlet, sink into a spiral of weight gain, self-loathing and emotional overeating, begging her doctor for diet pills. While today's viewers may find Betty's plight simplistic or pat, the idea that body image and weight were interrelated with feminism was revolutionary for its time. 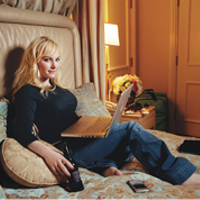 In fact, it changed the way activists looked at their bodies and politics. Even as this intersection between food, body image and politics has been debated, critiqued and absorbed, how far have we come?

Psychologist Susie Orbach's debut book Fat Is a Feminist Issue celebrates 34 years of providing theoretical and practical musings on the relationship between women and fat. The book is equal parts self-help advice, psychology journal, gender studies, and fat-acceptance theory. As feminist and fat acceptance movements evolved from second-wave protests to contemporary digital activism, Fat Is a Feminist Issue connected the dots between two parallel causes for human rights while championing the individual's right to be healthy and happy at every size.

Orbach's pioneer insistence that feminists needed to talk about body image and compulsive eating, while fat activists had to acknowledge issues of gender and difference, united two notorious social-activist movements that made progress possible across a dual spectrum of civil rights.

The second wave of U.S. mainstream feminism appeared well underway when Fat Is a Feminist Issue came to prominence. At a time when feminist rallies and actions organized predominantly around the Equal Rights Amendment and changes in the workplace -- as well as the emergence of fat-acceptance protests without a framework for understanding gender -- Orbach wanted to explore the private lives of female compulsive eaters. For a fat woman operating in the public sphere, life "centred on food, what she can and cannot eat, what she will or will not eat, what she has or has not eaten and when she will or will not eat next... The obsession with food carries with it an enormous amount of self-disgust, loathing and shame."

Within a few years of Orbach's debut release making the rounds in book clubs and classrooms, the feminist backlash of the 1980s became all too apparent. Critics claimed that feminism's modest (read: staggering) social and political gains were more than satisfactory. They wanted the general public to embrace post-feminist gender equality. Mostly, the naysayers got their way. Gone were the days of Orbach's group consciousness-raising sessions, where community members shared stories of fat shaming, body dysmorphia and eating disorders -- a public space that exposed a common hatred of fat and frequently female bodies while fumbling on the path to liberation. But where the groups left off, popular literature became the outreach to disseminate the gains of activists.

One of the author's shortcomings in 1974 was the narrowness of her topic's scope, particularly when it came to issues of race, genders other than cis women, sexual orientation, and disability. In the preface, Orbach noted that the groups of women she worked with were composed entirely of North American and European white women; similarly, discussions on queer fat bodies, trans fat bodies, and disabled fat bodies (outside the purview of eating disorders) are not referenced in the text. However, as both feminist and fat-positive movements took their message to the Internet, conversations among various social justice-minded communities continue to expand.

Several prominent feminist bloggers focus extensively on body acceptance, but their work often goes beyond the singular relationship of gender and fat. Writer and activist Tasha Fierce is a frequent contributor to Bitch and Jezebel and creator of the blog Sex and the Fat Girl, where Fierce documents her experiences as a self-described "fat, queer woman of color." She is particularly passionate when addressing the intersectionality of fat bodies.

"Our approach to building fat community needs to be a comprehensive and all-inclusive one," says Fierce. "White cisgender feminists who are fat need to recognize that there are different levels of oppression -- not everyone who is fat is only facing discrimination because of their weight." She pointed to a recent call-to-action by the organization NOLOSE which argues that people of color are too often portrayed as the impoverished, tragic face of a heavily politicized and trending obesity epidemic. Social justice organizers in both the fat-acceptance and feminist communities are responsible for facilitating inclusiveness within their ranks, she says. Fierce shared her insights for creating that environment. "When there are fat activist gatherings, the organizers need to make sure the venues and materials are accessible to those who use differing methods of communication -- these are just basics to start with."

Reconciling with our jeans

Fierce is hardly the only feminist-minded writer who insists on an intersectional approach to feminism and fat positivity. Late last fall, Hanne Blank released an expanded edition of Big Big Love, Revised: A Sex and Relationships Guide for People of Size (and Those Who Love Them). Blank read Fat Is a Feminist Issue as a college undergraduate. Her vision for mitigating privilege is deceptively simple and profound. "Shutting up and listening with humility and openness to what other people have to say about their experiences and their needs would be a great start," says Blank. "Then work on creating coalition politics." There's also the work of renowned womanists Renee Martin, Monica Roberts and Tami Winfrey Harris, who recently posted on the harsh criticism hurled at the overweight, middle-aged Downton Abbey star Brendan Coyle's appearance in a love scene.

Even for bloggers who haven't read Susie Orbach, her text's influence is undeniable. Consider Arwyn Daemyir, who blogs at Raising My Boychick. Her 2009 post on the futility of dieting is particularly memorable. Daemyir's mother was a subscriber to Radiance: The Magazine for Large Women and later provided her daughter with a personal subscription. Although Daemyir has not read Fat Is a Feminist Issue, her mother owned a copy. "I have a tag on my blog by the same title," she says, noting the phrase's influence. Yet Daemyir felt more influenced by titles that followed Orbach’s published work, including Marilyn Wann's Fat! So? and Bonnie Bernell's Bountiful Women, as well as the too-short-lived Hues magazine. Without Orbach's contributions to the feminist and fat-acceptance movements, perhaps none of these works would have drawn in audiences from both sides of the proverbial aisle.

Orbach's radical call for open dialogue on body image and eating disorders remains an essential text for generations of activists who struggle with understanding and accepting fat bodies. But the work is far from complete.

Within the movements, the same impossible questions cycle and recycle. In "Tiny Revolutions," advice columnist Cheryl Strayed (writing as "Dear Sugar") responded to a middle-aged woman experiencing bouts of insecurity at the thought of exposing her loose-skinned, not-skinny body to a new lover. Sugar poses a question that Orbach likely asked of her own clients in group sessions: "What's on the other side of the tiny gigantic revolution in which I move from loathing to loving my own skin?" But was anyone shocked when Sugar pointed to a profound failure of the feminist movement to flip the script on body-hatred? Thirty-four years after Orbach sounded the alarm, there is still no collective feminist vision of the other side. "We claimed the agency, we granted ourselves the authority, we gathered the accolades," Sugar writes. "But we never stopped worrying about how our asses looked in our jeans."

Orbach can point to a number of changes in the treatment of fat women and diet culture after the publication of Fat Is a Feminist Issue. Eating disorders are not the hidden phenomenon of decades past. As an author, she may have been able to take some credit after Cosmopolitan ceased running a diet-tips column after the book's release, but most of the mainstream magazines marketed to women, including Cosmo, would be hard-pressed to name more than a dozen instances of plus-sized bodies making front cover. Even in times of Internet connection and the subsequent fluidity of personal identity, fat bodies are policed and polarized into extremes. Feminism and fat-acceptance movements need Orbach and other feminist, fat-positive writers to establish correlations between body image and body acceptance. The revolution may still be possible, but it will require the collaborative vision of multiple communities to achieve.