[Editor's note: This week, The Tyee's List was drafted by Zoe Li, whose blog Woodwardsmile chronicles the quirks and bustles within a one-mile radius of Vancouver's Woodward's building, Li's home. Submit your own list ideas to editor [at] thetyee.ca, subject line: LIST.]

It is winter and I am writing a list of my favourite spots to visit in the spring that are within a one-mile radius of my home at Woodward’s in Gastown, Vancouver. 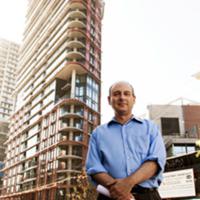 If there was one object in the city that should be featured in an X-Files episode, it would be the old fashioned scale at Army and Navy. The scale is situated on the landing of a staircase, the liminal space between two floors, and it has been there for as long as I can remember. I suspect many of us have weighed ourselves on the scale, which means you and I may have stood in the same spot once, and if so, then by some logic of science fiction, it is as if we have crossed paths somehow.

Location: North of Waterfront Road and East of Canada Place

The park is known for its sweeping views of Grouse Mountain, Vancouver's downtown skyline, cargo ships and red port cranes, but seldom do people mention the small marsh pond where ducks swim in the summer. Stand at the pond facing west, observe the skyline of buildings through the trees, and listen to sounds of transportation from trains, helicopters, ships and cranes. I won't say any more about the park as some experiences are meant to be a surprise.

The gardens are a condo dweller's delight, and a place of respite from concrete and glass. In the spring, double-flowering Japanese kerria bloom, and in the late summer by the shed, the unforgettable deep rose perfume of Madame Isaac Pereire thickens the air. Yellow irises nearly human height, rows of apple trees growing sideways, a Buddha statue under a pile of rocks in a manmade pond -- these are some wonders you will find in Strathcona’s community gardens.

*Note that it is best to explore with a friend if you are easily frightened. One summer I walked down a hidden path and caught a glimpse of a man living in the bushes.

There is an old Italian deli in Chinatown where you must ring a doorbell for entry, and little has changed inside since the 1930s. I will skip the history lesson and time travel metaphor and instead, turn your attention to one thing -- tomatoes. Angelo Tosi, owner and shopkeeper, sells his own brand of peeled plum tomatoes, Angelo Brand Tomatoes, which are grown and canned in Italy. And if you ask for a recipe, he will write on the can: 3 cloves of garlic, 1 whole onion, Italian spices. How many people in the city have their own brand of tomatoes? Go say hello to Angelo, do it this spring, and remember to ask how to cook.

Murchie's is located on a busy downtown street and yet when you step inside, it seems time ticks half a heartbeat slower. Perhaps the perceived change in pace is triggered by the sight of patrons sitting with teapots and cups, or clerks weighing leaves poured from old Chinese tins, I do not know. I do know that Murchie's has an outstanding coconut chai rooibos, which is a blend of cinnamon, ginger, cloves, chilli and coconut, and you must try it. So many things taste similar to other things, but not this tea. When I first took a sip, I thought, at last, something different.