[Editor’s note: Join a free streamed conversation between Tyee culture editor Dorothy Woodend and author J.B. MacKinnon about his new book 'The Day the World Stops Shopping' on the evening of May 27. Register here.]

In 1964, New York hosted a world's fair dedicated to “Man's Achievement on a Shrinking Globe in an Expanding Universe.” Coming at the end of the baby boom, the exposition basically seduced 51 million people into paying to attend a massive consumer products show, harbinger of an insatiable appetite for material goods that was about to explode and now threatens our very existence.

Back then, American industry was on boastful display — General Motors, IBM, Bell, Westinghouse, Ford, DuPont, Parker Pen and the like — and there was even an official drink, Orange Julius.

In faraway Adelaide, Australia around the same time, my father Desmond enlisted my help in unpacking a mysterious device (a juicer, it turned out) that arrived from America. My father, who apparently planned to launch the Orange Julius brand Down Under, gave me a short tutorial on the nature of the world economy and the core concepts of supply and demand.

“People the world over need four things: shelter, clothing, food and drink. There’ll always be demand for those things everywhere. If you’re in the business of making or selling any of those things, you’ll always have a market and you’ll always make money.”

Orange Julius was a drink and, ergo, we were about to make money. Except Australians, whose need for drink is legendary, didn’t want Orange Julius. Ergo, no money for Desmond.

But Desmond’s Dictum has always stuck with me because it’s true: stripped to their basics, our needs are few. It’s our wants that make the world a more difficult place to navigate, and it’s our wants that have tipped us into a global crisis of unchecked consumption.

“Overconsumption,” writes J.B. MacKinnon, “surpassed overpopulation as the greatest driver of our ecocrises sometime around the turn of the millennium. When it comes to climate change, species extinction, water depletion, toxic pollution, deforestation and many other challenges, how much each of us consumes now matters more than how many of us there are.”

“Getting and spending we lay waste our powers,” wrote old Bill Wordsworth more than 200 years ago, and now J.B. MacKinnon is here to tell us just how grievously all that getting and spending — that shopping — is laying waste to the natural world. And how urgently we need to stop.

The Day the World Stops Shopping is a sweeping masterclass in global economics and the anthropology of consumer behaviour. The book is stunning for both its complexity and its clarity. MacKinnon is a deep thinker and a deft prose stylist who has already done the world a very big favour as co-author, with Alisa Smith, of The 100-Mile Diet, a behavioural experiment that helped catalyze the local food movement.

Now, he has undertaken a thought experiment prompted by the fact that we are using the planet’s resources at 1.7 times the rate they can be regenerated; that if everyone in the world consumed at the rate the average American does, we would need five Earth’s worth of resources to sustain everyone (or four Earths if everyone lived like Canadians do).

Those are the sort of statistics you can pull from any UN report or NGO fundraising pitch about the environment, but for MacKinnon they are just a jumping off point for a deep, disturbing and thoroughly convincing investigation into the systems that support our addiction to consumption, and what we can do to arrest what is fundamentally an all-out attack on nature.

“For the sake of this thought experiment, I wanted to keep it simple: on the day the world stops shopping, global consumer spending drops by 25 per cent.” In other words, the world doesn’t really stop shopping entirely, but our rate of consumption drops dramatically. This, in perfect contrast to a “consumer-driven recovery” that most politicians and business leaders claim will be the only way to get over the economic effects of the pandemic.

Interestingly, as unthinkable as a 25-per-cent drop in shopping might appear, that’s the order of magnitude of the slowdown that occurred in many countries when COVID-19 hit. So MacKinnon’s speculative journey into a future based on less actually began happening in real time. 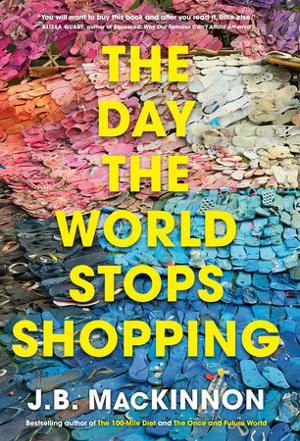 The new book by J.B. MacKinnon, who co-created the 100 Mile Diet, says the dangers posed by overconsumption far outweigh population growth. The pandemic offered a glimpse of the benefits of cutting back.

Some positive consequences have already been widely reported, including that lower consumption and especially less travel and tourism produced “a new dawn for wild things,” as MacKinnon puts it. “The bluer-than-blue sky that appear with shocking suddenness over the world’s cities was perhaps the most widespread reckoning humankind has ever had with the fact that our everyday actions have planetary consequences — and it meant that the carbon emissions we can’t see were fading, too.”

MacKinnon writes fascinatingly about the combined forces that have produced our consumer society and that keep almost all of us on a treadmill of more, reminding us for instance that there was a time not so long ago when shops weren’t open on Sundays (that’s 15 per cent less shopping time right there), but the stampede for more put paid to an “older, even ancient architecture of time” that was the sabbath.

He disdains “green consumption” as having done nothing to produce an absolute decrease in material consumption in any region in the world. Clothing, meanwhile, is mostly “garbage-in-waiting.” Efforts in “de-marketing” — such as Patagonia telling shoppers not to buy their clothes unless they really have to — end up having opposite effects and increasing sales.

While “our primary role in society today is as consumers,” MacKinnon writes, “when it comes to reducing consumption, you can be the change you want to see in the world, but it will not change the world.”

For that to happen, systemic changes at a scale and magnitude that no politician would be brave enough to campaign on — but that an epidemic can trigger because viruses don’t fear voter backlash — are required in every branch of our society and economy.

MacKinnon journeys to places — the Kalahari Desert, a small island off the coast of Japan — that allow us to witness what it can look like to live simply; to live more in tune with actual needs than contrived and confected wants. He also reminds us that the way we measure “progress” in modern economies — through indicators like gross domestic product — perversely leave out the very things that make life worth living in the first place.

Not long after the New York World’s Fair, Robert F. Kennedy made a speech, quoted by MacKinnon, “noting that material poverty in the U.S. was matched by an even greater ‘poverty of satisfaction, purpose and dignity. Too much and for too long, we seem to have surrendered personal excellence and community values in the mere accumulation of material things.’

“The GDP was buoyed, (Kennedy) noted, by cigarette advertising, ambulances, home security, jails, the destruction of redwood forests, urban sprawl, napalm, nuclear warheads, and the armoured vehicles used by the police against riots in American cities,” MacKinnon writes. In latter years, oil spills in Alaska and the Gulf of Mexico, or wildfires in California, outputs of the tarsands, etc. — these, too, get added to GDP as if they are good for us. 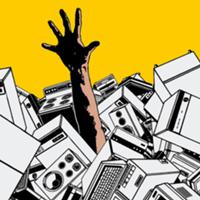 A Master Class on Overconsumption and Climate Change

Perhaps the only useful measure in the end is one that we, as consumers, or as de-consumers, can take of ourselves. Consciously calibrating “sufficiency” seems the most satisfying and hopeful path forward, coming to a place of “enoughness” in our lives that might make us think twice when the urge strikes to go buy more.

MacKinnon ends his thought experiment suggesting that a more humble goal to put us on a path solving the consumer dilemma is to reduce consumption by five per cent across the rich nations. “That would take us back to the lifestyle of a couple of years ago, a shift we might hardly feel. Yet everything would begin to change, from our desires to the role of economics to the future of the planetary climate. It might be the end of the world as we know it. It will not be the end of the world.”

That hardly seems a too much to ask if we are to avert doom as a species. Post-pandemic, the last thing we need is a “consumer-driven recovery.” As MacKinnon calmly and compellingly relates, the time has come to choose the road less travelled. It leads away from the shopping aisle.