[Editor’s note: Tyee culture editor and veteran film critic Dorothy Woodend in December named Bong Joon-ho’s film Parasite not only her favourite of the year but a “vivisection” of the where we’ve arrived as a society. Last night we learned the Oscars judges agreed. We republish her review here.]

If I had to pick a film that best sums up this year, it would Bong Joon-ho’s film Parasite.

I haven’t seen another film that pinned down the essence of the year, wriggling and squirming, with such eviscerating precision. It’s not just a film; it’s a vivisection.

Like an animal being gutted, the film reveals itself layer by layer, stripping away skin, fat and muscle, right down to the bone.

Doesn’t that sound fun? The strange part is that it actually is.

The Korean director captured the prestigious Palme d’Or at the Cannes Film Festival this year, and the film has been plucking prizes and juicy reviews since its French premiere. The praise is well warranted. Parasite is a singular construction of story and idea, with a political core that radiates out with radioactive creepiness.

But I think it’s even a bit more than that.

In spite of the occasional grimness, the film has a kind of gallows humour that lurches from laughter to tears and back again. Bong is one of the few filmmakers who can insert Keystone-Kops silliness into the middle of a police procedural and make it seem both logical and natural. The re-release of his sophomore feature, Memories of Murder, on the heels of Parasite’s success is cause for celebration across the land.

So what makes Parasite so great, Dorothy?

Just this. There are no human villains in this film, although it is a film about injustice and crime, both great and small. The great evil, lying underneath everything, yes, everything, is money.

Scrape away at every rotten bit of corruption and violence and it’s almost guaranteed you’ll find money at work. The worm at the heart of the rose, eating away. It’s here, too, in this tale of two families, one rich and one poor, and what this imbalance does to their sense of morality, justice and appetite. Because being poor often means being hungry. And the Kim family is hungry in a couple of different ways.

In the film’s opening chapter we’re introduced to them, living together in a subterranean apartment in downtown Seoul. Kim Ki-taek (played by the extraordinary Song Kang-ho), his wife Chung-sook (Jang Hye-jin), son Ki-woo (Choi Woo-shik) and daughter Ki-jeong (Park So-dam) make a meagre living folding pizza boxes. When Ki-woo gets a job tutoring a wealthy student, the entire Kim clan insinuates themselves, one by one, into the lives of the rich Park family.

The Parks live in a sleek steel-and-marble mansion filled with gleaming appliances and a well-stocked refrigerator. As far as rich folks go, they don’t seem all that bad at first. But cracks begin to appear. As Chung-sook, mother of the Kim family, says, “They’re nice because they’re rich.”

As the two families intermingle, things are moving in the darkness, intestinal forces — consumption, digestion and elimination. Call it a gut reaction.

Left alone for the first time in the Parks’ palatial home, the Kims eat and drink their fill, only to have their feasting interrupted when the Parks decide to return early from their vacation, announcing that they want supper waiting for them when they arrive. The dish they request is chapaguri, a mashup of two kinds of cheap packaged noodles. 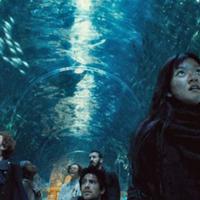 'Snowpiercer' Is the Must See Movie of Summer

But the Parks request the addition of a luxury element: Hanwoo beef.

Hanwoo is well known in foodie circles, rivalling Japanese Wagyu beef for its fatty marbling and rich taste. The joke resonates with Korean audiences, and its specific cultural and sociological nuances add a depth of flavour to the broth. Class conflict boiled down to its most basic elements is a struggle over resources. Who has to eat cheap noodles, and who gets fancy meat.

Other food items play central roles in the film, including a humble peach and a deadly meat skewer. Most of Bong’s previous work (The Host, Okja, Snowpiercer) incorporated some aspect of food: getting it, eating it, sharing it — or not — with others. Parasite continues this idea, looking at the different ways that capitalism’s butchery has sliced out the gentler aspects of humanity and replaced them with graft, greed and atavistic appetites of all kinds.

We’re eating each other, although not quite as literally as in Snowpiercer, where poor people resorted to cannibalism in order to survive.

In contrast, Parasite worms under your skin and stays there, feasting on fatty layers of denial, discontent and rationalization, until there’s nothing left.