[Editor's note: This is one of three Tyee excerpts from The Summer Book, a collection of essays by 24 B.C. writers — the perfect way to laze away a hazy August day. Enjoy! And thanks to Mother Tongue Publishing for permission.]

Cool water surrounds my thighs as I cross the Nitinat River after fish I think of as my own. I walk a corridor of conifers that talk with the sky, of willow that crowd the banks when wind turns them silver, then green. They take over, only minutes it seems, after winter flood strips the land of earth.

But this is a summer day, and I slosh the calf-deep channel east of what I call Bear Island. The bear that owns this stretch of forest crosses the lesser channel and leaves wet prints among rain-softened holes of bull elk and maidens they harbour this time of year. On this day, though, the bear is not at his island, nor on the west channel where willows make quiet noise in soft morning air.

I cast into moving hands of water above Cutt Corner where a log stretches the opposite shore. In the shade of trees wide as a hand-joined couple are Chinook salmon. They touch the surface, moving up, crossing over, then down, and then again back up, all day long, in a circle. Thousands of fish, each one as long as my leg. While I am early in my understanding of salmon, I already see that yellow leaves and white bubbles moving up means something very large is beneath.

A piece of silver and gold monofilament crosses the sun. A lure lands short of the other side, where fish are always found. They are never on your side of the river.

I wade cool hands of water that slip round my thighs, then deeper than a man likes to go. Water rises to my ribs, and I cast into shade on the east side of morning, where long spears of shadow cut across the river. I can’t see a single fish, though I know there are many, keeping out of sight of whatever predators may come.

I send a high weight-to-volume spoon as far as I am able. The Illusion, Kit-A-Mat, Iron Head, heavy lures that fly because their weight cuts a hole in the air. My lure travels the morning sun, into shade of millennium old trees, big arms spread out. Some are broken from battle when winter is in their hands.

And the small bereft call of an eagle, in its tree above the blue river. Its perch the winter river will take from it. But not today. I make the bird the small king of my day. The sun is in my chest and on my arms.

Then the sound of my line — sffft — into the strike. A large fish easily clears the water, tail passing up and over its head, then craters the river. I am pulled so hard I rise on my toes to keep from falling face-first into the tow of the fish. It simply moves upstream, and as though an invisible string is stuck to my sternum, I follow, dragging bottom. River bulges against my chest.

There is no word for a salmon this big, other than it is a great beast of an animal. No mere fish, no hold-in-the-hand, blue brook trout. This is a fish so large that when its head comes clear of water, it is as big as my own. I am in its element among its holes the size of cars.

It seems to take all morning landing the largest fish of my life. It boils dust on the bottom of the glide. Its game of tic-tac-toe, its spider-web flight, turns me in a circle, tip of rod pressing downstream, water moving me deeper than I was before. Then up, between me and my shore. Line cuts like a submarine conning tower. Its zzzt is the only sound in front of the eagle, centuries above, sun falling in pieces around its shoulders.

The Tyee is a big fan of The Summer Book, from which this essay by DC Reid was excerpted with permission by Mother Tongue Publishing. Reid’s is one of 24 pieces by B.C. writers in all corners of the province gathered into a collection that is by turns poetic, insightful, richly varied in tone and perspective. The Summer Book makes the ideal companion for your own end of summer escape.

A long time later, the great fish comes to me. I lift my rod high, right hand reaching, it seems, into the eye of Chinook. There is no other way to put it than the fish looks at me and into me. I feel its incomprehension, its fear. It shushes against my beating chest, so large it is as thick as I am, with a mouth into which I can stuff both fists.

I wrap twenty-pound test mono around my right arm, drop my long rod and golden reel into the river. From my mouth, where I’ve pushed them during the fight, needle-nose pliers are pulled, and the beast eddies close, eyes on my eyes. My fist is small in its mouth as the pliers retrieve the hook of subterfuge. And this hand, as so often happens, releases ribbons of red that is my blood. The teeth are a line of pins in black jaws, meant for holding and shredding prey.

When I place my hand beneath its belly, its alien, three-chambered heart beats my palm. I point its head into current. My other hand can’t grasp the wrist of its tail, so I stuff cold silver to my chest. Bending low, chin on water, I ship mighty cool water into my armpit on a golden day.

When it is ready, it lets me know. It moves its head side to side, which is the first movement of flight: how a fish understands freedom, making its body serpentine like a scarf in wind. The curve pushes down a black and silver body and the thrust of tail sends me clear off my feet. And then it is gone, back to its shade, back to the others in the invisible country of cold blood.

All day long, I cast into the invisible, and pull out the beautiful: fish only I see, sipping air where no one else can see them. Small bubbles rise from mouths that angle down to stony bottom. Shade is a dark medium that cannot be deciphered, unless your eyes are open.

All day in a cool river as deep as I dare, letting fish pull me where they will. I catch more than I thought possible: an even dozen to 50 pounds. I cast until my arms cannot withstand the hundred-yard runs, and I must quit–something I have never done before. Arms at my side, I offer up thanks, once more, to the fish still mouthing air in their shade.

My last deed is to name this nondescript run: Dennis’s Pool. It is hardly more than a glide, and in the river I will come to know, never more than simple. In a future summer, wader-less, I will walk across up to my neck to understand the water where salmon lie. Where they wait, for the river to rise, for rain to tell them it is time.

Rod over my shoulder, I walk back into the person I have become over the decades. This private person, whose private meaning is being alone with fish. In my future, the small glide will reward me with more coho and Chinook than almost any other place in the Nitinat. A place most fishermen pass, thinking it is shade, and the gloom and coolness forbids them entrance.

I return with striding sun. Upriver through shallow water, now on the east side. From the forest ten feet above, broken turf has been made into a sandy trail. This is where elk make their crossing. If a man is found walking in sun that sweats down his back, they withhold their presence. I give in to the forest without fear of being watched — the seventh sense we have of feeling eyeballs looking at us — a strange feeling. Bear Island is left behind, and when I turn back, a line of elk — males with crowns of bone, females the size of horses with delicacy of muscle — are moving down the bank. 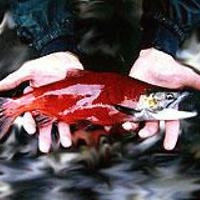 Out Here with the Kokanee

Sun drips down my glasses. I trudge into my shadow like Huckleberry Finn, rod balanced on my shoulder–the gift of fishing often. My hands are in my pockets. There is no one to whom I can tell the tale, who can live it my own private way. I thank Mark Twain, too. Thanking nature is my only fishing ritual. Its gift of pleasure recognized, on a half-mile, squelching, ankle-deep in a place of caddis and brown algae. I look up to endless tons of gravel and seagulls important in their whiteness. Nature and me, two fingers crossed.

Where I cross, the river’s at my waist. I brace with spread legs, quarter down, river pushing me into itself. But not all the way. Not this time.

Minutes later, I am breaking down my rod at Red Rock Pool. A guide I will someday come to know has dropped his drift boat, and clients, while he runs back up for his truck. The husband is a large Scottish man with a beard. “I fought it for half an hour and never even got a chance to see it.”

This is their version of the best fishing of their lives. “It was glorious,” his wife says and gazes into the wilderness that is Canada. To hook a Chinook and never get a look is a memory the length of a life.

“How did you do?” the man questions.

I simply shrug, for I have lost the ability to speak. In silence, I offer final thanks to the day. The beauty of the open eye.