[Editor's note: This is one of three Tyee excerpts from The Summer Book, a collection of essays by 24 B.C. writers — the perfect way to laze away a hazy August day. Enjoy! And thanks to Mother Tongue Publishing for permission.]

The ferry is late, so I don’t arrive at the cabin until mid-afternoon. By then I’m ravenous, but not just for food. More — I want to tear the cold chicken I’ve brought for lunch out of its silver foil with my bare hands, stuff chicken into my mouth, smear the grease all over my lips, face and breasts. I want to suck the sparkling mineral water straight from the bottle, toss it back roughly, everything roughly, just to feel the pressure, the pull at my skin. I want to take off all my clothes, roll on the ground — grass and dirt, all of it — and fall asleep in the sun. Life in the city in the past year has been traumatic: surgeries and separations, everything intense, fast, tightly scheduled. When a pleasant black-haired man on the ferry had tried to strike up a conversation, I wasn’t interested — too anxious, too cautious.

But really, I’m too afraid of passing boats or possible visitors to take everything — even anything — off. Instead, I stand on the deck, silently watching the water below, breathing in salt air and the hot green of late summer on British Columbia’s Gulf Islands. My dog does the rolling in the grass for me, then follows me inside as I close the door for a nap before dinner — very civilized.

The Tyee is a big fan of The Summer Book, from which this essay by Kate Braid is excerpted with permission by Mother Tongue Publishing. Braid’s is one of 24 pieces by B.C. writers in all corners of the province gathered into a collection that is by turns poetic, insightful and richly varied in tone and perspective. The Summer Book makes the ideal companion for your own end of summer escape.

Waking up the next morning, I lie still for several minutes listening to the deep silence between signals from the marker buoy offshore, an eagle’s cry, and dragonfly wings beating on the roof over my head. Later, listening past the hiss of the Coleman stove as I brew peppermint tea and eat yogurt sprinkled with seeds and honey, I hold my shoulders tight, my breath. I fear what might be out there. Surely, something large. Incredibly, I have forgotten my suitcase (all my camouflage!) back in the city. I only remembered food, my books, the dog. Luckily, a previous visitor has left blue jeans and a red plaid shirt on a nail — my new wardrobe.

I wake early and go down to the beach to hunch over the shiver and sigh of the morning breathing sea. Three gulls make like gossipy old men in the lagoon, clucking amongst each other then veering shoreward (toward me?) to scream in unison. On the way home, I suffer the pricks of blackberry vines to win my breakfast as birds warble all around me with the rising sun. A fool for all this wild, all this green, Dog races ahead, plunges — fearless — into the bushes and comes out with her tail high, ears perked, panting and wide-eyed, as if to say, Isn’t this fun!

Time here moves like an elastic band, stretching and contracting wildly. From 8:30 to 9:30 a.m. seemed to take forever, but the following hour passed in a breath. I watch my timepiece. It is relevant for post office hours. I watch my timepiece more than I watch the mountains a fraction of an inch higher in my sight. I still rest somewhere in the city.

My energy returns. No more yogurt and fruit — today I want bacon for breakfast, so I head out to the island’s only café for a cheese/mushroom/ham omelette, toast, jam and peanut butter, with a side of hash browns with vinegar and ketchup, and several cups of coffee. Many years ago I lived on this island, briefly. Here in the café, I recognize no one and am happy to be silent, speaking only the necessary words to the waiter, sitting back with my coffee, feeling fat and luxurious and wildly indulged.

Later, on the deck of the cabin overlooking the blue peace of the channel with the cabin swept, dishes done, and my city jeans and socks dripping clean from fresh loads of water packed from the hose near the road, I suddenly feel an urge to — somehow, to someone — say thank you; I throw a piece of bread to a passing gull.

A small rug cushions my bare feet, the dog hunkers beside me, and a wild guitar blues it from the cabin’s cd player, so how can I be still? I start moving, slowly at first, and soon I’ve danced all over the deck, Dog watching curiously at first, then curled up, more interested in a good nap. Now my notebook is laid out, my shirt is off, and heat pours over me. It is the slow heat of late summer under a brilliant blue sky on one of those days when the sea invites you in and there’s a hint of the golden glow of fall that is the smallest reminder to enjoy it now because you know rain is coming. Beside me sits a bowl full of blackberries picked this morning with the dew still on them, coffee hot, and the draft of a story called “No Faith” ready to go.

Sound, too, stretches and shrinks here. Is it only because this place is so quiet that every sound becomes loud? Unlike the general hum and buzz of the city occasionally peppered with a siren’s scream, here each sound is distinct: the intermittent ring of the marker buoy, waves below, fir and cedar and hemlock all around, crows, eagles, even the buzz of a wasp — and at night, Dog’s scratching. If I listen more carefully, below all these there is an enormous silence. It is so large, so powerful, I feel another wicker of fear. This silence is alive.

All last night I tossed, restless, hearing wild wind, trees shusshing, surely a major storm brewing. But when I went outside to pee, the night was calm. Only a raging surf that sounded from inside like rush hour traffic.

We seem to have fallen into a routine, Dog and I: mornings are for writing or chores, afternoons to visit my elderly friend Eve in her sick bed, then my secret indulgence — we hike to the point, where I’ve found a small gully where no one can see me except the dog and the sun. There I take my clothes off and sleep naked, front and back baked, then go down the rocks to the sea and splash head and arms, shoulders and feet in cold salt water. It feels simultaneously aesthetic and indulgent. I want to collect my nerve, get hot enough to jump in.

Having no one around me for five days, no mirror in the cabin, no reflection of me at all, I am forgetting to be self-conscious; I undo zippers and buttons without thinking. My breasts feel good from sun and salt and wind. 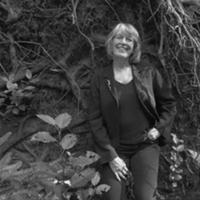 'Journeywoman: Swinging a Hammer in a Man's World'

Tonight in the moonless near dark of 9 p.m., I was lured by the crash of waves and went down to the sea — where there was no storm, only a very high tide and large, noisy swells, the foam luminescent as a blanket of fireflies dotting dark rolls of water. I was afraid for just an instant, when I imagined the depth and coldness of those swells over the places I had walked with Dog this afternoon.

But oh that afternoon! Utter peace and unself-consciousness, laughing at the dog as she waded deeper, trying to keep her chin high above water, cocking her head back like some Victorian dowager, rolling her eyes at me as if to demand, “Give us a hand here!” But I was too busy concentrating on how beautiful and varied the stones were on that part of the beach, finding the roundest and smoothest for my table back home. Warm and comfortable in sun and water, I’d felt suddenly odd, as if something were wrong. Then it struck me that I was “relaxed” — such a foreign feeling to have no fear, no lists in mind, no phone calls to make!

I go down to last night’s terrible sea and walk where the dark water was boiling just a few hours ago. An orchestra of kelp all swing their heads in rhythm — yes no yes no — with the tide. Even snails left in the dry above the water line seem to move to the same music.

All day the sky is overcast, gray, sad to say goodbye. I fetch water, launder all the towels and the red plaid shirt and blue jeans I’d borrowed, hang them back on the nail, ready for the next visitor who leaves their city clothes — city-self — behind. I go into the small shopping centre and buy a newspaper to replace the kindling I used, and have a last visit with Eve. We were just getting used to these slow, lazy afternoons together. I wash on the rocks. Time to go.

When I fall asleep on the ferry, I dream a gentle black-haired man puts his arms across the back of the bench behind me and rests his hands just above my head. When I wake, I don’t need to look. I am comforted and at peace.