When the holiday crush hits, The Tyee is known to list book ideas for everyone on your naughty and nice list. Have an uncle taking in refugees? On it. Want to send a message to your new Member of Parliament? Got you covered. 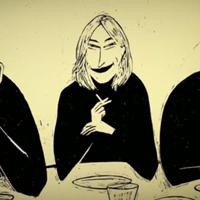 But this year, we thought to branch out beyond our usual staff and contributors to ask the experts surrounded by teetering stacks of books year-round. Denizens from Pulpfiction, Spartacus Books, and Paper Hound in Vancouver obliged us with their top picks of 2015.

Station Eleven by Emily St. John Mandel (Vintage). ''I've read four or five of her books and have always been amazed by every one,'' says Chris Brayshaw of Pulpfiction on Main Street. The Toronto Book Award-winning novel moves back and forth through time as six actors and musicians survey damage left by a pandemic flu that wiped out most of North America's population. St. John Mandel weaves post-apocalyptic stories of friendship, celebrity, obsession, and love. ''It's a very well written [story] about the persistence of art in the face of tragedy, and how culture can rebuild a devastated social system.''

Rad American Women A-Z by Kate Schatz (City Lights). Each letter of the alphabet receives a one-page biography of an important woman in U.S. politics, culture, sport, or science alongside stunning illustrations to inspire children of any age and gender. "I loved this so much, I gave it to my sibling for the holidays," notes Ivanhoe Ivanhoe, a volunteer at Spartacus Books.

A Superior Man by Paul Yee (Arsenal Pulp Press). In Yee's debut novel for adults, he chronicles the stories of Chinese workers who helped build the Canadian Pacific Railway. As protagonist Yang Hok travels along the tracks to return his son to his mother, he runs into the conflicts between the Chinese and Native people, unveiling the tough reality of Chinese immigrants living in Canada in the 19th century. ''It's a local writer, local press, and really important topic,'' recommends Rod Clarke, co-owner of Paper Hound.

The Odd Woman and the City: A Memoir by Vivian Gornick (Farrar, Straus and Giroux). Vivian Gornick is an American author, journalist, cultural critic, essayist, and memoirist whose work has appeared in The Nation, The New York Times, and The Atlantic Monthly. A long-time New Yorker, her latest book is a memoir about her relationship to how the city and has changed over time and the changes she's experienced herself. Through her encounters with a man called Leonard and other city dwellers, the book offers commentary on friendship, feminism, and urban life. ''I took it out for coffee and did nothing for three weeks but read that slim book very carefully,'' says Brayshaw.

Where the Words End and My Body Begins by Amber Dawn (Arsenal Pulp Press). Amber Dawn revisits a medieval Spanish poetry style in which another author's words invite a response. In this collection, Dawn has a dialogue with other queer poets like Gertrude Stein and Leah Horlick. ''It is a quick stand-alone read, perfect for a cozy, sensual moment of introspection,'' says Taz Solace, volunteer at Spartacus Books.

Eraser Street: Hubris, Humility and Humanity in the Making of a City! by Henri Robideau (Grunt Gallery). A collection of photographs originally showcased in an exhibition at Vancouver's Grunt Gallery, Eraser Street illustrates the resistance against gentrification in the city over recent decades. The author reflects on the images by adding commentary directly onto the photos, in his own handwriting. ''It's very captivating stuff,'' says Clarke of Paper Hound. ''Street-level, from-the-gut descriptions of how the city is changing right before our eyes.''

Rom Com by Dina Del Bucchia and Daniel Zomparelli (Talon). A collaborative book of poems based on the conventions of the romantic comedy genre. Some of the poems are single-authored, while others are co-authored by Del Bucchia and Zomparelli. With easy-to-get cultural references, the poems are irreverent and playful and touch on issues of sexism, consent, race, and sexuality. ''It's been widely popular for us even among people who have professed having no interest for contemporary poetry,'' says Brayshaw of Pulpfiction.

Preparation for the Next Life by Atticus Lish (Tyrant). ''The best novel I've read in 10 years,'' says Brayshaw. Winner of the 2015 PEN/Faulkner award, Lish's debut novel is set in Queens and follows the sincere but ultimately flawed and doomed relationship between a U.S. veteran and a Chinese undocumented immigrant. While one character navigates obstacles familiar to migrants searching for employment, the other faces the reality of coming back home after living through the trauma of war.

All Involved by Ryan Gattis (Ecco). The novel takes place during the 1992 Los Angeles riots and focuses on untold stories of the riots, narrated by members of LA's criminal underworld. The characters, involved in extraordinary circumstances, tell the stories of prejudice, resilience, and loyalty while living through a pivotal moment of U.S. history. ''Ryan Gattis has done a tremendous job,'' says Clarke. ''It was my favourite novel of the year.''

undercurrent by Rita Wong (Harbour). A collection of work by award-winning Canadian poet Rita Wong that reflects on the power and sacredness of water, whether it be in the form of ocean currents, the headwaters of the Fraser River, or fluids in the womb, Wong writes a love song for rivers, land, and sentient beings on earth, exploring a variety of poetic forms. ''This beautifully covered book is a crystal-clear drink for our turbid times,'' said Kelly Haydon, volunteer at Spartacus Books.

The West Coast Modern House: Vancouver Residential Architecture edited by Greg Bellerby (Figure 1). ''For a lot of older people, it evokes a sense of nostalgia, and younger people will see an elegant attention to the craft that is not much in evidence in contemporary Vancouver architecture,'' says Brayshaw. A collection of archival and contemporary photography of modern homes -- not all of which are still standing -- built in Vancouver between the early-'40s and mid-'60s. Through photographs and essays, the book highlights what is considered as one of the most important periods in Vancouver's architectural history, a time when the city's ''West Coast Style'' was forged.