It's almost ghoulish to suggest, but it's hard to imagine a more fitting time for the release of The Illegal, the latest novel from Commonwealth Prize-winning author Lawrence Hill. 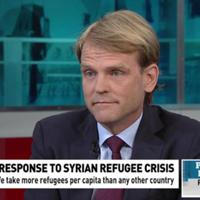 Having mourned drowned Syrian refugee Alan Kurdi, the world may finally be ready to ascribe a human face to the numbing statistics of the global refugee crisis. The Illegal offers one such face, but it's not the sombre portrait readers might expect.

Centred around Keita Ali, an elite marathoner from the fictional island nation of Zantoroland, The Illegal follows Keita as he flees his homeland to escape retribution for his father's political writings. Slipping in to Freedom State -- another invented island nation north of Zantoroland -- Keita struggles to establish a life for himself with a plan to live off prize money from running races. Freedom State, however, is a nation in the grips of a backlash against refugees, placing Keita's life under constant threat.

"I wanted to write about a world gone amok, where the government of a major western nation has been elected on the platform of deporting refugees," Hill says of the book's premise.

Given the plotline it is perhaps surprising that The Illegal is a darkly funny novel; a barbed work of satire strung over a page-turning mystery that's easily readable in one or two sittings. That the story speaks to Canada's political moment only flips its pages faster.

"I think that the themes [in The Illegal] are just as painful as any other book of fiction I've written, but I really wanted to shake loose and express myself in a different way," says Hill, who is best known for The Book of Negroes, a novel (and now mini-series) set against the African slave trade. "I wanted to include humour and satire, and sort of outrageously push the credibility to the very furthest point I thought I could."

To some readers, however, the cruelty-filled world of The Illegal may not seem so far-fetched.

"A lot of awful stuff happens in this book," says Hill, acknowledging The Illegal's parallels with the current refugee crisis. "But I wanted to walk that really treacherous line of having a light touch with really painful material. I think emotionally I was going through so much pain myself -- it was a really hard time in the last few years for all sorts of family reasons -- and I just kind of needed to work more playfully on the page just to get through it in my heart."

Hill is, at least in part, referring to the passing of his sister, writer Karen Hill, who died suddenly in early 2014. "I was processing my grief in this book, and perhaps putting Keita's family in danger was my way of moving through that."

His sister, as it happens, was also responsible for introducing Hill to the world that inspired The Illegal.

"I went to visit her three times in West Berlin -- she lived there for almost all of the '80s -- and each time I went she introduced me to all these Sudanese refugees." Over these visits, he says, he became fascinated with the day-to-day struggles of undocumented workers and refugees.

"The guy [Karen] fell in love with and married had been a political cartoonist in Sudan," he explains, "and then there was a coup and he had to flee." Hill says Karen's husband made a living drawing caricatures on the street -- an under-the-table hustle echoed by protagonist Keita and his running legs.

Though it's hard to imagine a more personal engine driving the pages of The Illegal (Keita's connection to his sister, Charity, is especially moving in this context), Hill adeptly connects with the universal. And while Hill chose to invent nations in order to escape the burden of verisimilitude, it's not a stretch to imagine his inspiration.

"I didn't want a reader saying, this is ridiculous, this is not how Canada works," he explains. "I did draw on experiences in Canada and other countries and then tried to push them to a nightmarish place."

Instead of denying refugees access to health care -- which the Canadian government did in 2012 -- Hill's invented nation bans refugees from renting apartments. The author notes both these nightmare policies make life near-impossible for undocumented people, "with the idea that if you make them miserable enough, they will leave."

Here, it seems unnatural to continue to discuss the inhumanity of Freedom State when Canada has so much to answer for.

"On one hand, Canada has been, in our finer moments, an incredibly generous nation," says Hill. "We have welcomed people from around the world. I've visited, a number of times, Pier 21, the Museum of Immigration in Halifax, and it's astonishing how many people came through the gates of Halifax, many of them supported.

"We opened our doors to Vietnamese after the war, and the same with Kosovo and the Balkans after the war in the former Yugoslavia, or with Ugandans after Idi Amin expelled them in 1972. But at the same time we also seem to have this rising tide of intolerance and general old-fashioned nastiness, which is what I'm trying to dramatize in the novel."

Hill observes that "nastiness" has popped up now and then throughout our history. "We've refused to let people fleeing the Holocaust land in Canada and sent them right back to death camps when we could have saved their lives. And in recent years, we've treated Sri Lankan migrants like they are dangerous and like it's not safe for us to have them here."

He also sees that legacy lurking in Canada's immigration detention centres, where refugees are jailed in startling numbers. "We're basically treating them like criminals -- not all, but some of them. That's happening today."

"So we know this crisis is erupting in Syria," he continues. "And I'm sure if this type of crisis happened in France or the United Kingdom we would have welcomed 50,000 or 100,000 people really quickly. We would have found ways to process them and to cut through the red tape and to bring them to Canada. "

Thankfully, a hope for change makes its way into The Illegal, which ends as it began -- with a surprise.

"I am not a cynical person," he says. "We all know how much pain there is in the world, but I didn't really feel the need to lead to complete and utter disaster. I feel optimistic that even in this world, Keita -- and the reader can -- begin to move towards the sun."

And as for his hopes for Canada, he's similarly optimistic.

"I do believe profoundly that we have more room in Canada for more people, and that we would benefit from letting more people in. Not just from being good global citizens, but from welcoming people that have proven, historically, to be industrious and good for our economy.

"We have the ability to send federal officials out into the field to process people more swiftly. And of course we have the ability to demand of our elected officials to make the lives of refugees who do come here easier so they can get on with their lives," he says. "It is numbing to think that we can't solve these problems, but we can show more humanity in the face of them."