Every day I come home to a teetering pile of FedEx envelopes and UPS slips. 'Tis the season of ''for your consideration'' film screeners, sent from film studios for the year-end critics awards. I look at the growing heap on my desk and feel slightly sick. A weird form of paralysis has overcome me of late. I'm not exactly sure why. One could watch films all day and night, and still they come. 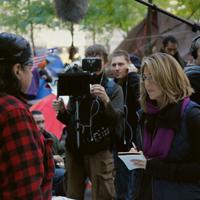 Will Naomi Klein's Film Change Everything?

I must admit that I've been underwhelmed by many of the awards contenders thus far, whether it's the Brylcreem stiffness of Bridge of Spies or the bosomy honk of Meryl Streep, embodying yet another Grand Dame. This time it is Emmeline Pankhurst in Suffragette. Or maybe Mother Goose, it's hard to tell sometimes.

But to be fair, there were many moments of cinema goodness this year.

Although Brooklyn occasionally felt like a Hallmark special, Saoirse Ronan, who played the lead character in the film, possessed a clarity and directness that was singularly refreshing, not unlike a splash of cool water. I wish the rest of the film had been up to her measured and graceful performance.

A world away from 1950s Brooklyn is contemporary Los Angeles and the down and dirty streets of Tangerine. This film has continued to live inside my head, and I'm not exactly sure why. Maybe it's the tangy chewiness of the dialogue or the acid-etched Hockney blue of L.A. skies, but it has proven impossible to shake. Unlike many films that come with enormous budgets, famous faces and little purpose, Tangerine possessed the raging great energy that comes from genuine surprise. I don't mean narrative twists and turns, but the quality of seeing something you hadn't seen before.

The moment I felt that bubble-pop hit of newness, my brain perked up like a bouncy puppy. The sensation has been difficult to forget and oddly addictive. Sometimes I watch the film's trailer just to hear the poetry of street slang; it is rude and alive and absolutely glorious. I am happy to know that other folk felt the same way about this film. It has cropped up on several year-end lists and recently made out big time at the Gotham Awards

Even the old guard had some new tricks this year. Philippe Garrel's film In the Shadow of Women felt as fresh and newly minted as a summer day in Paris. I don't know if the director intended his film to be as funny as it was. According to folks in the know, apparently not, and this somehow made it even better. Men and women and the way they torture each other in the throes of love may be the oldest story going, but the film had a lightness and a tender way about it that unfurled as slowly as a new leaf. It gently entered my heart with only the barest of stings.

The fact that Mad Max: Fury Road has unexpectedly emerged as an awards contender also does my heart good. Director George Miller may be 70 years old, but the man has the zip and zing of someone 60 years younger. The gonzo madness of this movie is difficult to top, but it is in the smaller, quieter moments where it truly established its cinematic intelligence. In this it felt distinctly like a throwback to films of old, where lovely detail, be it dialogue or time to simply flesh out a character, was perfectly interwoven between scenes of insane mayhem.

One of the best bits in the entire film takes place in an instant when the pregnant supermodel bride of evil Immortan Joe gets a thumbs up after a particularly harrowing close call. It is a fleeting, beautiful and brave moment, made all the more affecting for being so underplayed. In truth, it made my heart stop.

December is traditionally a time of big film releases, and this year the biggest of them all drops on Dec. 18, 2015.

Even the most jaded of film viewers must feel their souls sing a little when the swelling bombast of a lone trumpet heralds a new chapter in the Star Wars saga. I can't help but be excited about Star Wars: The Force Awakens. Call it a childhood belief in movie magic or some other such sucky thing, but there is no denying the goose bumps that pop up all over your aging self, or the misty feel that threatens to overcome your rational mind. Hope springs eternal, but please just let the damn thing be half decent.

When Hollywood puts its shoulder to the wheel, it can still churn out some galloping great muscled movies, full of stories that bolt from the gate and charge headlong towards the finish line. By the time they finish your heart is racing, you're sheened with sweat, and you feel you've been to the races.

A few other biggies will hit theatres in the next couple of weeks including The Revenant and The Big Short, which contains every U.S. actor of note strutting their stuff, much like our man Leo DiCaprio in The Wolf of Wall Street.

In all honesty, I didn't have many expectations about The Big Short, but damn! This baby delivers the goods, and more certainly the all-star cast -- Christian Bale, Brad Pitt, Ryan Gosling and Steve Carell -- carry with them the clout of almighty white man, but what is most surprising about this film is the level of despair and rage lurking just under the surface of things. The film depicts a country in free fall. It is a place that is both financially and morally bankrupt. If ever a film convinced me that money is the root of all evil, it is this one.

But more on this in a couple of weeks.

Documentary is still where some of the most interesting filmmaking is happening. Having recently returned from the CPH: DOX Festival in Copenhagen, I am happy to report that the documentary genre continues to get weird. CPH: DOX is infamous for mixing narrative and documentary hybrids, often in the main competitive strands. This year was no exception. Often you have no idea what the hell you are watching and this has the consequence of forcing you to be strangely on guard and at attention.

It doesn't matter if you're seeing something that is exquisitely beautiful or horrific or both -- witness Roberto Minervini's film The Other Side -- what lingers is the impact of these films. One of the stranger things about the feature competition in Copenhagen was the number of depictions of rural American poverty. After a while, it starts to seem almost fetishistic or maybe anthropological.

I couldn't help but feel a strange schism in the brain, contrasting films like God Bless the Child or Uncertain with Spielberg's latest bloated bit of American mythmaking (Bridge of Spies). The span between what the ''be'' and the ''seem,'' to bastardize Wallace Stevens, can wreak havoc with your understanding of the American mind. One of the greatest things about the U.S. is that it can contain such multitudes. But sometimes I have the terrible feeling that our American cousins are helpless to stop themselves from diving into the abyss.

Back to safe old Canada for a moment.

If you're so inclined, you can still make it up the hill to see the Whistler Film Festival, running until this Sunday. Carol, Todd Hayne's lipstick lesbian drama opens the festival before starting its commercial run next week. There are certainly lots of big tent pole films, but sprinkled in amongst them, like a carpet of flowers, are many great short films, a number of them from Canadian filmmakers. As a jury member for the Alliance of Women Film Journalists this year, I am happy to report that the short form is alive and well and going strong at Whistler. Keep your eyes peeled for gems like Celine Devaux's Sunday Lunch, or Alethea Arnaquq-Baril's Aviliaq: Entwined.

Back in Vancouver town, the 18th European Union Festival has gathered films from every corner of the continent for your delectation. The festival runs until Dec. 9, 2015 at the Cinematheque. The Turkish Film Festival also kicks off this weekend at the Vancity Theatre.