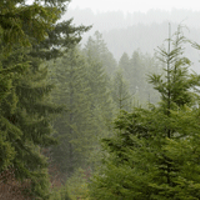 In the fall of 2005, the day filming started on the first movie I directed, The Green Chain, my producers received the news that "Augie" -- who was signed on as one of our stars -- had to drop out. Augie...who I always felt I ought to call "Mr. Schellenberg," no matter how often I was told that I shouldn't.

Everyone kept the news a secret from me while we were shooting so I wouldn't be distracted. Then, after we wrapped, my producers (Donna Wong-Juliani and Tony Wosk) told me August Schellenberg was no longer in our movie and asked me for "Plan B."

The three of us ended up in a Wonderland style loop where they kept telling me Augie had left the movie while asking for another name, and I kept repeating that Plan B was convincing Augie to change his mind.

It wasn't just that the part was written for him -- which it was -- the movie was written for Vancouver director, John Juliani (who'd recently passed away). And the two were lifelong, inseparable friends. They'd met in theatre school. The way I remember the story, Augie wandered into the National Theatre School, sat in on some classes, met John and decided to give this acting thing a try.

John and his wife Donna Wong-Juliani made one movie together -- Latitude 55. It starred Augie. Now Donna and I were making a movie. Augie had to be in it.

There was no second choice, no Plan B beyond asking again and again and again, sending emails that went unanswered. He was living in Dallas (where he'd moved in 1995), so we couldn't exactly drop by to chat.

I got to know Augie a bit when he was doing a radio adaptation of George Ryga's The Ecstasy of Rita Joe in Vancouver's CBC studios with John Juliani. Augie starred in the original production at the Vancouver Playhouse back in 1967 with Frances Hyland, Robert Clothier and Chief Dan George -- the most iconic play in the history of the Playhouse, maybe in the history of Canadian theatre.

Augie talked about how important the play had been to him, to Canadian theatre, to Canada. This is arguably the first play in Canada that was truly important. This is the play that touched the hearts and consciences of then prime minister Pierre Trudeau and then Indian Affairs Minister and future prime minister Jean Chr&eacutetien -- and helped convince them that they had to do...something. Augie was a big part of that. Many of his First Nations roles were iconic. Indelible. Important.

Free Willy (all three of them). North of 60. Saving Grace. The New World. He'd been nominated for pretty much every major acting award in Canada, he'd won a Gemini (for The Prodigal), a Genie (The Black Robe), a pair of American Indian Film honours known as "Eagle Spirit Awards," a trio of First Americans in the Arts Awards and a lifetime achievement award from Canada's National Theatre.

At some point when it looked like Augie wasn't even going to consider reconsidering his decision to leave The Green Chain, I finally offered Donna and Tony my Plan C. We would cut the part.

The role was his. If he couldn't do it, it wasn't meant to be.

We waited, we waited a bit longer, we finally talked and found a way to make it work. When Augie arrived in Vancouver he told me there had been blood, he thought the cancer had come back, he thought he didn't have much time left and wanted to spend it with his family - his wife, his daughters. But the cancer wasn't back. False alarm. And his wife, actor Joan Karasevich, was receiving a lifetime achievement award in Winnipeg, so Augie (who didn't like to fly) was flying to Canada. He could stop in Vancouver to shoot our movie.

He showed up on set looking healthier than any of us -- including crew members less than a third his age. There was a moment when the character he played talked about chopping wood, and how when you work in the woods, the muscle never really goes away. He flexed his muscles. He told me to feel his muscles. Not only won't I have muscles like that at 70, I didn't have muscles like that in my twenties. Chances are neither did you. He used to be a stevedore, he used to be a boxer. I couldn't believe this man was 70, that he'd almost lost a fight with cancer, I was sure he was indestructible. When we shot the scene he took off his suit jacket, so audiences could at least get a hint that those muscles existed.

After thinking he was too sick to do a one day shoot on our little movie, Augie went on to play King Lear at the National Arts Centre. He was nominated for an Emmy for playing Sitting Bull in the HBO movie Bury My Heart at Wounded Knee -- a part he'd played in Sharon Pollock's play Walsh and the TV movie, Crazy Horse. There were more beautiful guest spots on TV, more movies, more plays.

The cancer came back a little while ago.