What would the movies do without poor people: backwards hillbilly bullies, wizened crones with peckerwood accents, powerfully built men resembling fireplugs who wear cowboy hats and leather vests? Everyone hard-bitten, taciturn, mean as rattle snakes and spouting regional dialect that would make William Faulkner swoon. Director Debra Granik's film Winter's Bone has all this, and a great many toques to boot. 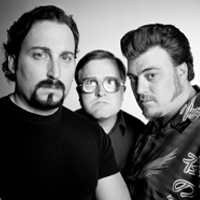 Winter's Bone, which won the grand jury prize at the Sundance Film Festival last January, has a great deal to recommend it. A spare, honed style, some good old-fashioned cornpone drama and a fine central performance from Jennifer Lawrence, who plays a country girl with a spine of tensile steel and not a lick of sense, as her pack of wolfish relations might say.

Lawrence is Ree Dolly, a young woman on a mission to find her missing father, Jessup, before his jail bond (for which he has posted the family home as collateral) comes due. As the titular head of the Dolly clan, Ree is responsible for her two younger siblings as well as her mother (who exists in state of near-catatonia). She must find her father, or at least as many pieces of him as still exist, to prove that he's either able to make bond, or has slipped this mortal coil completely. As she sets out on her quest, the film tags along behind, dogging her heels like a hound dog.

It's immediately clear that life in the Ozarks is a mite grim. The locals enjoy colourful pursuits like cooking up batches of methamphetamine and standing off Johnny Law whenever the sheriff comes nosing around. Granik's adaptation of Daniel Woodrell's novel of the same title presents Ree's quest as a solemn slog through the customs and culture of backwoods America. In this rotting corner of the country, cops and criminals are pretty much the same thing. Each side has guns and jobs to do and the only thing that sets them apart is that the criminals are generally more honest about what it is they're engaged in.

As Ree tramps through the woods visiting distant relatives, each more hostile than the last, the forces of family mass together to keep the truth hidden. Her uncle, Teardrop, a fearsome looking man with jailhouse tattoos, family patriarch Thump Milton and his vicious wife Merab are the apotheosis of this escalation of mean-ass kinfolk. Who needs enemies when you have family?

But the film also hits every major poverty cliché: hard men, harder women and a code of honour among the thieves and junkies that is as intractable as it is ancient. The notes are solemnly intoned one after the other. There is something irksome about the film's very authenticity. Maybe I've seen one too many films that border perilously on poverty porn -- too many beautifully shot scenes of rusted out cars and falling down shacks -- to fully trust cinematic depictions of poor folks any longer. Maybe Winter's Bone is almost too careful, too self-serious, or maybe there are simply too many hats.

I don't know why the different toques that Ree Dolly was wearing started to bother me after a while. If you're really poor, you don't have a different hat for each day of the week, you have one lone hat that you wear day in and day out. Having grown up in rural poverty, whenever I see it depicted on the screen as a long series of cliches, a part of me thinks, "Fakery, foolishness, pastiche."

Nevertheless, "genuine" poor folks have been the bread and butter of independent film for a while, and Winter's Bone (as a Sundance favorite and award-winner) falls squarely among a group of films that take a similar approach to depicting people in grim surroundings and worse straits. Frozen River and Ballast, among others, share the idea of rural poverty, along with a similar palette of blue, grey and dull brown.

Documentaries have also mined the same territory, for better, in films such as October Country, or for much worse in The Wild and Wonderful Whites of West Virginia.

Directed by Julien Nitzberg and executive produced by Johnny Knoxville (he of Jackass fame) The Wild and Wonderful Whites of West Virginia presents the unorthodox life choices of a passel of Appalachian hillbillies called the White Family. Jesco White, a gas-huffing, Elvis-impersonating, grade-A nut job who witnessed his own father get cut down in a hail of buckshot, is ostensibly the star of Nitzberg's documentary, but the culture that produced him is also indicted. But even while the White family carries on like rabid dogs, Nitzberg's films inadvertently raises the question that if you're making a film about crazy poor people, what do the crazy poor people actually get out of it? The fact that Jesco White's initial cooperation with the film was secured through a donation of water and firewood, not a share of the film's profits, should tell you something.

Poor folks, their ways, customs and desperation, make for good drama. John Williams's book, Back to the Badlands, about American crime writers, explored precisely this phenomenon. Author Daniel Woodrell gave him a tour through the place that gave rise to the community depicted in Winter's Bone.

To give him credit, Woodrell actually lives in the place that he writes about, albeit in a better part of the town than the one in which the fictional Dolly family might abide. Of the real Ozarks, and the people and places that inspire his work, Woodrell says: "These are people so alienated from American culture that it's like a parallel universe." It's this tone of bitter alienation that gives Winter's Bone its interest. The central idea is that in large sections of the American heartland, a new type of society has emerged -- a neo-Darwinian world of survival governed by archaic codes of behaviour, and thick with casual violence and desperation.

It's not a new idea. Michael Adams' book, American Backlash, made a strong and cogent case for the notion that the American population is made up of three very different camps, and the third camp is heavily armed and high on meth.

Registered Democrats and Republicans, although ostensibly on opposite sides of the political fence, share many characteristics. It is the third group of unregistered and disenfranchised voters that are very different.

This third group is the largest and continuing to grow quickly.

Writes Adams: "According to our data, the values showing the most pronounced growth in the United States from 1992 to 2004 fell into three categories: risk-taking and thrill-seeking, Darwinism and exclusion, and consumption and status-seeking... The values of the average American also reveal a growing resignation to life in a world of dog-eat-dog competition: Americans increasingly register a Darwinist attitude toward both economic and social life, becoming more likely to reason that those who suffer misfortune in life deserve what they get and that others shouldn't worry too much about helping them."

From the abandoned ruins

It will be interesting or maybe terrifying to see what happens when this population outstrips the remaining two. Or maybe it's already in the process of happening, according to James Kunstler who has been patiently waiting for the imminent collapse of American society and writing furiously the entire time. "Our popular culture would embarrass a race of hebephrenics. We think that neck tattoos are cool. A lot of our pop music is overtly homicidal. Our richest citizens have managed to define a new banality of evil. Our middle classes are subject to humiliations so baroque that sadomasochism even fails to encompass the finer points... we're digging our national grave with a kind of antic glee, complete with all the lurid stagecraft that Las Vegas, Hollywood, and Madison Avenue can muster."