Greater Vancouver has embraced the concept of transit-oriented density — building clusters of new rentals and condos along subway lines.

But if people assume all those highrises sprouting around SkyTrain nodes necessarily are delivering more affordable housing, they could be mistaken.

Two economists recently looked at the effect of building the Millenium SkyTrain extension and the Canada Line, and found the new transit lines increased housing prices in both newly connected neighbourhoods and along existing routes the new extensions connected to.

Housing in the newly connected neighbourhoods increased an average of $26 a month, while neighbourhoods along existing routes saw housing increase around $15 a month, per dwelling.

“Usually public transit infrastructure is characterized as a government expenditure that increases the well-being of predominantly lower-income households, but we have these price effects,” said Andrea Craig, a professor of economics at the University of British Columbia.

Craig and her colleague Alex Chernoff ran their model two ways: in one scenario, the transit extensions were built but didn’t push up home prices. In that scenario, “you get the kind of traditional: ‘Yes, public transit spending helps everyone, but it predominantly helps lower-income households,’” Craig said.

But when the economists ran their model with rising home prices, high income residents benefited the most.

But in the region’s bubbly housing market, closeness to transit is a selling point for both home sales and rentals.

One challenge to making those homes affordable is that when swaths of the city are rezoned for transit-oriented density, the value of the land immediately rises and that increase gets reflected in higher prices or rents for units.

As one displaced Metrotown tenant explained, having to find a new apartment farther away meant his family of three now spends $350 more on rent and $150 more on transportation costs because they’re no longer near a SkyTrain station — all on a single income of $50,000 a year.

The phenomenon means that the people who would benefit the most from being close to transit are forced to live farther away.

Local government leaders have been trying to tackle the problem for years. In Burnaby, a mayor who had governed for 16 uninterrupted years was defeated in 2018 over the issue of rental demolition. Since that time, the city council has brought in tougher renter protections, requiring developers to allow tenants to move back into new buildings at the same rent they were paying before their building was torn down. The developer is also required to cover the extra costs if the tenant’s interim home during construction rents for more than what they were paying before.

Kennedy Stewart, the mayor of Vancouver, says he plans to propose similar rules for redevelopment along Broadway, where a new subway line is currently under construction and there are fears that currently affordable rental buildings could be lost as the area is densified.

The Metro Vancouver Regional District also has been studying the problem for years, and has suggested that governments use publicly owned land or buy more land around areas where transit is expected to be expanded in the future. This spring, the provincial government announced it had introduced changes to legislation that would allow the province to buy land around transit stations and bus exchanges, with a plan to build housing and other community amenities. Currently, the BC Transportation Financing Authority can only buy land to build new transit infrastructure, not for housing.

Expanding transit is important to reduce traffic congestion and greenhouse gas emissions, and rapid transit projects like new subway lines give commuters a faster, safer and more comfortable ride, meaning more people may choose transit over driving. But, Craig said, policy-makers need to look at the spillover effects of building new rapid transit lines too — effects which weigh more heavily on lower-income people — and think about how to mitigate those effects. 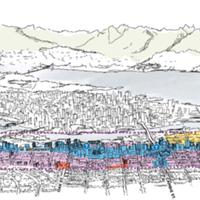 Governments also need to think about other policy tools to capture rising land value when public money is going into expanding rapid transit. Allowing government to buy land for housing and community centres is one way to do that.

“Our results show that the benefits of the public investments in rapid transport infrastructure go to people who own properties in neighbourhoods nearby,” Craig said. “So a policy of the transit authority purchasing property before announcing lines and then developing it would be a form of land value capture.”