But the city known for hundreds of “demovictions” — evictions as a result of redevelopment — has just embraced a radically different vision for housing, one that wouldn’t have been accepted before last year’s municipal election.

After five terms as mayor, Derek Corrigan was ousted by newcomer Mike Hurley, who ran on a simple campaign promise of “time for change.” Now residents who have waited months for Hurley to deliver on his promise finally have an idea of what change might look like.

Earlier this year, Burnaby created a diverse 18-member task force on housing. Collaborators included Murray Martin of ACORN, an organizer against demovictions in the Metrotown neighbourhood; developers from companies such as Concert, Solterra and Wesgroup; representatives from unions; the non-profit housing sector; and Burnaby city council.

The task force began meeting in late February, and its public engagement process involved over 2,600 members of the public. It collected profiles of Burnaby residents, including people like 56-year-old Sue, who’s been on a waitlist for social housing for three years, and empty nesters like Karl and Angela, who own a 7,700-square-foot property too big for them.

On July 29, the task force presented its 18-recommendation report to council.

It’s written with candour; for example, the report calls existing community plans “outdated” documents that “do not address the need for a range of affordability, accessibility, amenities and services.”

Council approved the report unanimously, and city staff are now working on turning the recommendations into policy.

While the changes have yet to be implemented, the Burnaby Now community paper is already calling this new vision a “game-changer,” and activists are saying the suggested renters’ protections are more impressive than Vancouver’s.

Here are three reasons why the report marks a turning point for Burnaby.

When Derek Corrigan was mayor, Burnaby’s growth strategy consisted of — to borrow his word from a 2016 Tyee interview — “protecting” single-family neighbourhoods while concentrating density around rapid transit.

Meddling with those neighbourhoods — and the sanctity of the detached house — was once politically taboo.

In 2018, Burnaby cracked down on a homeowner who converted a crawl space into a suite for grandma to move in and look after the grandkids. The city ordered the homeowner to demolish the suite and fill it with sand.

But governments are warming up to the idea of zoning reform as one solution to housing affordability.

In Oregon this June, lawmakers approved a landmark bill to eliminate single-family zoning in cities throughout the state.

In Burnaby, the task force’s report focuses on the fact that the city’s neighbourhoods of detached houses have remained “largely unchanged.”

The city has concentrated growth around its four SkyTrain-served town centres, but the report says there are many other areas with shopping and transit, such as the Heights on Hastings, that could do with more housing choices and amenities.

The report suggests tweaking the city’s official community plan to welcome an even spread of housing growth and options amongst Burnaby’s neighbourhoods. The task force would like to see more developments with densities between houses and towers, such as townhouses.

These suggestions are in addition to policies of “gentle” densification already in the works, such as welcoming laneway housing and secondary suites in duplexes.

While the report doesn’t use the word “NIMBY,” it does mention that education and advocacy are needed to “increase community acceptance for new housing forms and gentle densification.”

The task force also wants staff to make sure that density can be welcomed without increasing speculation.

As Burnaby renters were displaced when their apartments were redeveloped into condo towers, Corrigan explained that “if you want to make an omelette, you have to break a few eggs.” Though he did say that redevelopment in general is usually “not as traumatic” as it was in Burnaby’s Metrotown.

According to the Canadian Mortgage and Housing Corp., there was a net loss of 1,026 purpose-built rental units during the 16 years under Corrigan. No other Metro Vancouver municipality experienced such a loss; most others gained units in that time.

In May, Burnaby adopted its Rental Use Zoning Policy, which requires, at minimum, a one-for-one replacement of demolished purpose-built rental units to ensure that stock isn’t lost as a result of redevelopment.

Also, the new rental units are required to be affordable, as defined by 20 per cent below the CMHC average for the area.

But the task force wants even more help for renters.

In the event of renovations or the demolition of an apartment building, it recommends that displaced tenants be offered temporary housing at a “swing site.”

Tenants could also rent in the private market, with the city requiring the developer that displaced them to offer a cash top-up if the tenant’s rent is higher than what they were paying before.

For demovictions, the task force recommends that developers offer tenants the right of first refusal for a replacement unit in the new building.

The suggestions are a far cry from the city leaving renters to what former mayor Corrigan once called the “realities of the marketplace.”

But if Burnaby follows through with its task force’s recommendations, its efforts to prevent displacement will be even stronger than Vancouver’s.

Vancouver’s strategy of compensation is more about a “buyout to leave town,” according to the Vancouver Tenants Union, whereas Burnaby is helping renters stay.

The Corrigan government had declined to allow permanent homeless shelters in the city.

The former mayor had always argued that it’s not the job of municipalities to make up for the social services that provincial and federal governments have increasingly skimped on beginning in the 1980s.

This applied to his attitude towards homeless shelters, which he called Band-Aids that only cover up the visibility of societal problems. In a 2013 Burnaby News Leader interview he said the kind of people in shelters are the ones who’d pull out your gold filings if they found you dying on the sidewalk.

The task force departs from this attitude towards shelters, calling for a “made-in-Burnaby” plan to reduce homelessness.

Already in the works is the city’s first permanent shelter, scheduled to open later this summer.

The city began operating temporary warming shelters for the first time for the duration of the recent winter months. Previously, there were a few shelters that would only open during extreme weather. 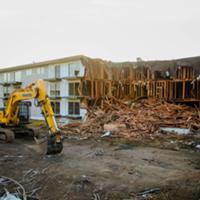 It’s Possible to Develop New Housing Without Displacing Tons of Renters. Why Don’t We?

Beyond shelters, the task force wants a range of supportive housing options.

The city, say its members, could offer up land for the development of non-market housing, welcoming projects by non-profits or such public sector groups as BC Housing and CMHC. The city could also offer incentives or extra assistance to community groups with land, such as churches, that are interested in developing housing.

The task force also recommends that the city review what can be done with the funds collected from developers buying extra density from the city, saying that “practices with respect to allocation have not kept up with the current housing environment and are likely too narrow to support the full range of recommendations put forward... ”

The housing task force will reconvene in September 2020 to review the progress of city staff on implementing its recommendations.

You can read the full report by the Mayor’s Task Force on Community Housing here.