Remember that 67-year-old pipeline and its controversial bitumen expansion project that Prime Minister Justin Trudeau bought from Kinder Morgan for $4.5 billion in 2018?

Well, a lot has happened since then.

For starters, the bitumen export project has climbed from a price tag of $7.8 billion to $12.6 billion and counting.

Meanwhile, a global pandemic has slowed the economy to a crawl and destabilized oil prices by bluntly curbing demand, probably for years.

Cenovus and Husky, two of the five largest oilsands producers, just merged to save money by killing more than 2,000 jobs. Suncor axed another 2,000 employees. The so-called “economic engine of Canada” is shedding jobs, not making them.

As the world’s oil industry shrinks, prospects for global economic recovery seem remote if not problematic, because the world runs on oil.

China, the presumed market for Alberta’s heavy sour crude, has arrested two of our citizens, bullied our leaders and become a global exporter of technological tyranny.

And climate change, the topic everyone likes to endlessly talk about, continues to erode shorelines, burn forests, create refugees and undermine global security.

So does the world still need the Trans Mountain expansion project?

That’s the timely question David Hughes, one of the country’s foremost energy experts, deftly answers in his latest report for the Canadian Centre for Policy Alternatives.

And the answer is a big fat no.

His conclusion is telling: “The $12.6 billion the government plans to spend on the construction of TMX is counterproductive, as it is unlikely to increase the profits of Canadian producers or result in a revenue stream that will both cover construction costs and provide additional funds to reduce emissions in a meaningful timeframe.”

The reasons for this bleak outlook are not that complex and really haven’t changed since 2016 when The Tyee and Robyn Allan and other economists warned that the pipeline was grossly uneconomic.

Allan’s research in particular parsed the assumptions made by Kinder Morgan in its 2015 benefit analysis. That document predicted the pipeline would make lots of money if oil prices remained above $100; if the Canadian dollar was priced on par with the U.S. greenback; if other proposed pipelines were not built; and if bitumen secured higher prices in Asia.

Allan concluded that all of those “ifs” were dubious and that Kinder Morgan’s assessment lacked credibility. In its rehearing of the project in 2018, the National Energy Board never re-examined these poor economics.

But Hughes has. His report highlights that the best paying market for Canadian bitumen remains the U.S. Gulf Coast and the U.S Midwest where refineries can handle heavy sour crude. (The majority of costly heavy oil refining capacity is in the U.S. — not China.)

As Hughes documents, a bevy of pipeline projects and expansions of existing lines including Aurora-Rangeland, Keystone, Express, Southern Lights and Line 3 now guarantee that Canadian bitumen will get to those markets.

But the heart of the argument for TMX was always the claim that Canadians would get a higher return for bitumen with an Asian premium paid for our heavy oil. That turns out to have been a pipe dream.

Hughes looked at the prices that Chinese paid for Maya crude, a heavy sour product similar to Canada’s bitumen, and guess what? The Chinese do not pay a premium.

In fact, they paid $4.27 less a barrel than U.S. refiners who have invested billions to process heavy oil. (Economists Allan and Jeff Rubin looked at the same data and came to exactly the same conclusions.)

Here’s what Hughes concludes: “The price data for Mexican Maya in recent years tells us that Canadian heavy oil exported to Asia is likely to command a lower price than if sold to the U.S. This is to be expected given that oil is a globally traded and priced commodity, and once quality differences and transportation costs are accounted for, oil should trade at roughly similar prices everywhere.”

This reality explains why very little oil currently moving through the existing Trans Mountain pipeline ever goes to Asia.

So, if no Asian premium exists, how can an over-budget pipeline make any money in a global economy awash in cheap oil?

Hughes has an answer for that one too. “Canadian producers are in fact likely to lose money if their oil is transported via TMX to Asia.”

And what about the claim made by then-finance minister Bill Morneau in 2019 that TMX would generate $500 million in annual revenue, which the government would spend on reducing greenhouse gas emissions? 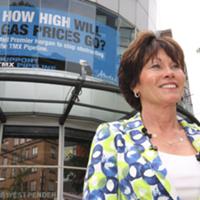 Another fiction, says Hughes. The only thing the TMX pipeline now guarantees is that greenhouse gas emissions will continue to rise in the country.

The bottom line is no surprise. A pipeline that was so uneconomic in 2015 that Kinder Morgan couldn’t raise enough funding to start it is now doubly uneconomic and owned by taxpayers.

“Even with existing production forecasts, the project is not needed and will not result in increased profitability for producers,” adds Hughes.

A responsible federal government would admit its mistake and cancel the line.

It then would take that $12.6 billion and actually use it to reduce energy demand and emissions in practical ways that strengthen the robustness of Canadian communities.