You have been charged with providing “independent advice” to the government, and news accounts say you aim to submit your findings “in the fall.”

Interesting timing. Now that the BC NDP have called a snap election, will they release your conclusions, even if they are damning, as voters make up their minds on who will be the next government? Or will your report arrive in the waning days of autumn, after the election?

In any event, your appointment is an admission that the project’s nine-member board has failed to do its job and report frankly on the project’s problems to the BC NDP — continuing the trend set under the previous BC Liberal government.

A political culture of delusion, deception and lack of transparency has dominated the largest infrastructure project in the province’s history, and the results are ominous: an out-of-control budget for a project with clear, substantial and probably unfixable geotechnical issues that were well documented but ignored due to political bias.

If your review is going to be frank, meaningful and competent, it must acknowledge some basic truths about systemic problems baked into megaproject economics as thoroughly documented by the Oxford scholar Bent Flyvbjerg.

As Flyvbjerg has explained, megaprojects promise jobs and prosperity but mostly deliver complexity and fragility. Nine out of 10 megaprojects (high-tech infrastructure) will never deliver a return on their initial investment.

Here then is a brief review of eight truths on megaprojects that the Horgan government continues to ignore at the province’s peril, and that your review must acknowledge if it is to have a shred of credibility:

1. Budget busters are the norm for megaprojects.

A survey by the Oxford University Said Business School found that 274 dams built since 1934 routinely went over budget, and not just by a little amount. On average they went 96 per cent higher than their approved budgets. As Manitoba’s Keeyask dam and Newfoundland’s Muskrat Falls project demonstrate (both went hugely over budget), Canada is no exception to this rule.

Premier Horgan’s government still pretends that Site C is some kind of unfortunate anomaly. Yet it represents the norm or iron law of megaproject economics: “Over budget, over time, under benefits, over and over again.”

Site C began as a $6-billion project. Now its $12-billion budget threatens to become a $15 billion to $20-billion mega-fiasco due to serious geotechnical problems.

2. Among megaprojects, dams are among the worst for big overruns.

The only megaproject with a worse cost overrun record than a modern hydro dam is a nuclear power plant. Horgan’s government ignored these facts.

Orthodox economic theory claims that heavy investment in infrastructure such as Site C (to support LNG development) will cause economic growth. But global evidence from China, where the state has massively promoted infrastructure investment, debunks this theory. Most big Chinese projects have failed to deliver any positive returns.

4. Megaprojects by their nature invite faulty logic and estimates.

The proponent of a megaproject, whether corporate or government, typically underestimates costs, overestimates revenues, diminishes environmental losses and overvalues spillover effects (such as jobs) in order to win project approval.

These tactics result in the “survival of the unfittest” in which the “the worst infrastructure gets built,” says Flyvbjerg. Sound like where we’ve arrived with Site C?

5. Small is beautiful and big is fragile.

Research supports building smaller and more flexible hydroelectric projects that can be built quickly. (Large dams take eight to 15 years to build.) Your government either refused to consider more economic alternatives or rejected altogether other alternatives such as wind, solar and geothermal.

Small projects can adapt to social and economic changes and therefore, as Flyvbjerg puts it, “are preferable to high-risk dinosaur projects like conventional mega-dams.” Horgan’s government continues to ignore these proven economic principles.

The root causes of cost and schedule overruns at Site C have nothing to do with the pandemic. They are purely the product of an optimum bias by BC Hydro engineers and a political bias by government.

Behavioural science explains what is happening at Site C. BC Hydro has known about the instability of Peace River shales for decades but decided the risks could be mitigated with changes in design and cost. “The problem with cost overrun is not error but bias, and as long as you try to solve the problem as something it is not (error), you will not solve it,” says Flyvbjerg.

Politicians commonly overcommit to megaprojects at an early stage, “resulting in lock-in or capture, leaving alternatives analysis weak or absent, leading to escalated commitment in later stages.” Former premier Christy Clark pushed the project, and then Horgan failed to exercise due diligence in the public interest. Flyvbjerg explains that the megaprojects don’t fail fast: they fail slowly. The Site C dam is massive government failure in slow motion.

8. Megaproject messes are not random events.

Lastly, megaprojects share much in common with pandemics, climate change, financial wrecks, floods and wildfires. They have long tail risks because they appear as random extreme events.

According to Flyvbjerg, there are only two ways to respond to extreme events whether they visit our societies as massive wildfire, a global pandemic or an over-budget megaproject: you cut the tail (and cut your losses) by responding immediately, or you act prudently and avoid the risk altogether. 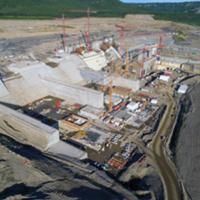 As Flyvbjerg notes, “Extreme events will haunt humankind, over and over. It is only a matter of time until an event will occur that is more extreme than the most extreme to date. This is the ‘law of regression’ to the tail.’”

Historically, human societies have been dismal at managing regression to the tail. In our concentrated, optimized and highly interconnected global system, the scale of our failures is now escalating, and Site C is but one glaring example.

“We cannot afford leadership that ignores or underestimates regression to the tail,” says Flyvbjerg.

Mr. Milburn: Your “independent” review to the government cannot and must not avoid these truths.