With an election looming and climate change a burning issue, will Canadians’ experience of extreme weather shape the outcome?

Andrew Scheer’s Conservatives seem to be betting it won’t. Others are counting on biblical floods and the clouds of smoke from wildfires to push voters into the arms of parties promising radical action.

New research by EcoAnalytics, a non-profit initiative of university researchers and Canadian environmental charities, suggests the latter might be nearer the mark; but it’s complicated — and that many are allowing preconceptions to cloud their judgment.

Our surveys show that Canadian public opinion is on the move. From 2011 to 2018, the percentage of Canadians who believe there is solid evidence of climate change rose from 80 to 90 per cent, and the belief that human activity causes climate change rose from 40 to 65 per cent. Scholars consider the latter a “gateway” belief, because those who hold it tend to support actions and policies to reduce carbon pollution.

But is experience with extreme weather responsible for this increase?

The answer is complicated. Data from the EcoAnalytics and the Université de Montréal show that Canadians are increasingly likely to cite unusual weather as a reason to believe that global temperatures are on the rise.

However, whether people are actually changing their beliefs based on extreme weather is less clear. In fact, the evidence is also consistent with people selectively interpreting local weather in a way that reinforces their pre-existing beliefs about this increasingly political topic.

We examined the attitudes of Canadians, for example, according to their degree of confidence that “the temperature on Earth has been increasing” or “has not changed.”

We then asked respondents a question about temperatures in their region the previous summer and compared the responses with the actual Environment Canada records.

What we found is revealing. When average summer temperatures were unusually low (two degrees below the 30-year norm), nearly all respondents accurately reported lower temperatures in their local area.

In other words, the less you believe in climate change, the more likely you are to ignore climate signals like warmer temperatures.

Psychologists and political scientists refer to this as “motivated skepticism” — a phenomenon exploited by some politicians who play to the cognitive biases inherent in human decision-making to justify inaction on climate change.

We also wondered whether experience of other forms of extreme weather alter our beliefs and behaviour. To find out we looked at perceptions of flood risk.

As more intense flooding, fires and droughts occur, however, people may be connecting the dots. Recent research, based on 2018 data from New Brunswickers who had experienced a record-breaking flood event, shows them more willing to discuss climate change adaptation and, yes, mitigation — and alter their attitudes and behaviours. 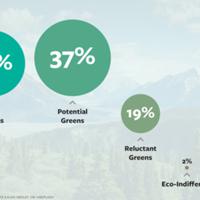 To Win, Politicians Must Woo Voters with Action on Climate

New Brunswickers with recent experience of flooding also showed higher levels of belief, and agreement that climate change is “a very serious problem” and already harming Canadians. They were also 10 per cent more likely to say they would purchase additional insurance — at both $10 and $20 per month. And, across the sample as a whole, those who reported recent flood experience were 10 per cent more likely than others to strongly support a carbon tax.

We cannot say whether these effects are large, long-lasting or causal, but they point in the same direction.

Though some Canadians may interpret extreme weather through the prism of prior beliefs and values, actual experience of floods and, possibly, other climate-related natural disasters, might increasingly drive us to update our beliefs about the severity of climate change, alter our behaviour and support policies that seriously address this global threat.

Politicians would be wise to take heed.