After coasting to victory in the federal NDP leadership race last year, Jagmeet Singh decided against seeking a seat in the House of Commons and embarked on a different journey.

He launched an introductory national tour. Visiting every province and territory, pledging to have “100,000 conversations across Canada" on a “get-to-know-me” tour, it was an attempt to lay an NDP foundation that he could build on in anticipation of the 2019 federal elections.

On Aug. 8, Singh finally announced he will run in a byelection in Burnaby South, a riding in a Metro Vancouver suburb 3,300 kilometres from his home in Ontario.

According to David Moscrop, a political scientist at Simon Fraser University, Singh can’t afford to wait any longer either. The “get-to-know-me” tour was a risky strategy, and NDP support is still stagnant at best.

The NDP has had a strong provincial presence in recent years, but has been called “completely irrelevant” at the federal political level.

According to Moscrop, it is essential for Singh to hold a seat in the House of Commons to build NDP support federally.

“He needs to prove himself as a leader to the House, the country, the party, and to the caucus,” Moscrop added.

But why Burnaby South?

Moscrop believes the answer was forced by the resignation of Stewart.

“All of a sudden there’s an empty seat, and the other NDP prospects aren’t particularly encouraging right now,” he said. “Why not go for it?”

Though Singh may have limited experience and knowledge of the local Burnaby issues and concerns of voters, he announced that he’s “all in on Burnaby” and will move to the riding if he wins.

His announcement focused on the immediacy of national policy reform. But Singh argued that the issues of health care, affordable housing and the $9.3-billion Trans Mountain pipeline expansion were both local and national issues.

According to Moscrop, that duality is just the nature of having a local representative who has be a part of the national conversation.

On healthcare, Singh told the crowd the NDP would introduce a universal PharmaCare plan and criticized the Liberal government for prolonging the policy development by demanding more studies. He claimed the federal government would save $4.2 billion if a universal PharmaCare plan was established, and accused the Liberals of cutting healthcare spending by $36 billion over the next 10 years.

“Imagine we could invest that money into frontline health providers, shortening wait times for surgical procedures, and build a hospital that we need so badly here in Burnaby,” he said.

On affordable housing, Singh criticized the federal government’s 10-year national housing strategy, an ambitious plan to tackling homelessness, the shortage of new housing units and repairs to existing units over the next decade.

The $4 billion Canada Housing Benefit, which is aimed to help families by providing an average rent subsidy of $2,500 annually, is set to commence in April 2020.

“How many times in your life have you had a crisis, but wait two years before doing anything about it,” Singh said. “We need action now to invest in the solution.”

On the Trans Mountain pipeline expansion, Singh made his intentions clear but did not present a plan to stop it. 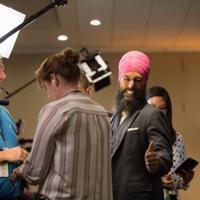 According to Moscrop, the pipeline could give Singh an edge over any byelection opponents.

The Trans Mountain pipeline expansion is a local issue because Burnaby hosts a terminus and is on the frontlines of the protests. Moscrop added that the opposition to the pipeline is higher in Burnaby than most places and maybe even the highest in the country.

Though a date for the byelection has yet to be set and Prime Minister Justin Trudeau has yet to approve the byelection, Moscrop says it should occur before March 14, 2019. He anticipates a Liberal contestant.