Though he’s standing behind a curtain at the Shaw Centre in Ottawa, Jagmeet Singh sounds as though he just walked out of the desert.

Three days of handshaking, interviews and speeches have left him raspy, and it isn’t over yet.

The weekend’s NDP convention was Singh’s first as party leader and the party’s first since 2016 when a majority voted against the leadership of Tom Mulcair.

Singh fared much better, getting a 90-per-cent approval rating from party delegates during the mandatory leadership review.

“For me it’s really important to connect with the people who believe in this movement and spend time with them,” Singh said. “Discuss issues with people, but also have a good time with people, just be able to spend that time bonding and connecting. That’s a really big part of who I am and I think that’s something my leadership brings.”

The convention offered a strong hint of the party’s direction under Singh. He emphasized the need to address inequality during his speech Saturday, and delegates raised the issue anytime they were asked about priorities under the new leader.

Singh’s decision to delay seeking a seat in Parliament in favour of touring Canada to become better known was also praised. Singh was an NDP MPP in Ontario and the party’s deputy leader there before his first ballot victory on Oct. 1.

Delegates were reluctant to make direct comparisons between Singh and Mulcair or describe how the party is changing under his leadership.

One obvious difference is Singh’s hard stance against pipelines, though he avoided the subject in his address Saturday. Mulcair favoured a more robust review process, but was more open to pipeline construction.

Mulcair was a staunch supporter of marijuana legalization, but Singh has taken a major leap with a proposal to decriminalize most drugs, not just marijuana. Harm reduction advocates have argued decriminalization is a more realistic policy which can save lives. Singh has embraced the approach.

Singh also signalled a desire to move the party to the left on income equality during his leadership campaign, suggesting a Working Canadians Guarantee that would triple government assistance available to low-wage workers. 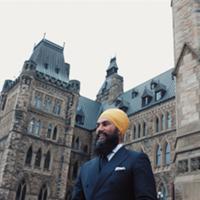 Jack Layton, Mulcair’s predecessor who died after taking the NDP to official Opposition status, spent his first months as party leader without seeking a seat and touring Canada.

In the past Singh has pointed to Layton’s success as proof he doesn’t need to be in the House of Commons to get the job done, and delegates seemed to agree.

“He really has been across the country listening to Canadians,” said NDP trade critic Tracey Ramsey. “There’s an excitement around our new leader and we’re just getting behind that.”

Singh is banking on his policies resonating with Canadians who are suffering from inequality and not reaping the benefits of an economy they are told is booming.

He told delegates many Canadians are still struggling to pay bills and find housing, chiding the Liberal government for not taking action quickly enough.

“The government in general has said some nice things,” he said. “But good words aren’t enough to address the inequality that exists in our society.”