While it has been apparent for quite a while, our ethereal concepts of sustainability are no longer adequate in addressing the climate crisis. Where then do we turn? In the three excerpts by acclaimed scientists, scholars and authors below, our proclivity to materialism, our food supply systems, and the materials we use to ground ourselves in the world are questioned and brought into focus. And for a limited time, Tyee readers have a chance to win one or all of these books. The contest to win a book of your choice (or all three!) closes tonight. Click here to enter now.

A Book of Ecological Virtues: Living Well in the Anthropocene
edited by Heesoon Bai, David Chang and Charles Scott

This project of transforming the self, and by extension the culture and community, is well explored in many philosophical and spiritual traditions of antiquity. As autopoietic creatures, we fashion ourselves to adapt to changing inner and outer environments. Granted, not all activities turn out to be ultimately adaptive; what helps us survive in one moment may prove deleterious over a longer course…

Since much of the current ecological crisis traces back to those who enjoy a middle-upper-class lifestyle, the onus is on the developed nations, especially those in the West, to curb consumption and to transform the cultural-economic landscape. This requires significant alterations to what we deem as the material requirements of a good life. We will have to dismantle our sense of entitlement as we shift away from heavy industry to local production on a smaller scale. We will have to relinquish material abundance as a symbol of personal achievement and worth and embrace simplicity as personal freedom.

This endeavour will challenge our ingrained habitus while demanding tenacious struggle against social structures. Perils await, as do indescribable rewards. But the practice of countering the machine can itself be a source of fulfillment — for although we shall not always see the fruit of our labour, we can imagine in the heat of our grunt and sweat the royal shape of Mount Fairweather. We can agree with Camus that all is well, that the struggle itself is enough to fill our hearts. Like Sisyphus, we can imagine ourselves happy.

Uncertain Harvest: The Future of Food on a Warming Planet
by Ian Mosby, Sarah Rotz and Evan D.G. Fraser

Few people understand the threat climate change poses to our collective food future more viscerally than the Vuntut Gwich’in. Their northern homeland straddles the border between Alaska and the Yukon, and climate change has already begun to profoundly affect every aspect of their lives and livelihoods. The name Vuntut Gwich’in, after all, translates as “People of the Lakes,” and over the past decade many of those lakes in Van Tat — also known as Old Crow Flats — have been disappearing. In July 2007, for instance, one of the largest and most important of them, Zelma Lake, drained over 80 per cent of its water volume in just a few weeks.

As Norma Kassi, a prominent Vuntut Gwich’in politician, activist and community-based researcher, told us when we met with her in Whitehorse, Yukon, Gwich’in Elders have been warning about the impacts of these changes for a long time. “My grandfather,” she told us, “took me to a very special place where all the birds come from all over the world. We were watching them landing and greeting each other, playing and they seemed so happy to be home. We watched them for a while and he said, ‘You know, when you are a woman, it is not going to be like this; you are going to see just loons there, a pair of loons maybe. Then you will know that hard times have come.’”

Kassi’s grandfather’s warning — unlike most of the predicted food futures discussed in the previous chapter — has proven, sadly, to be all too prescient. “Now many of the big lakes surrounding the smaller lakes, they’ve now drained or are drying up due to permafrost melt,” Kassi told us. “They’ve dried up, they are gone and so did our food sources that were part of that habitat. There are just immense willows growing. It’s unreal, you can’t even walk through, it’s thick. And with it goes the animals, they’re no longer there.”

The sheer scale of the changes in Van Tat is staggering. It’s been estimated, for instance, that the total area of lake cover has declined by more than 6,200 hectares since 1951, with the vast majority of that decline happening in the past few decades. And it’s no wonder: by one estimate, the average annual temperatures in Old Crow Flats increased by 2.5 degrees between 1953 and 2010, causing the permafrost to thaw at an unprecedented rate.

Concrete: From Ancient Origins to a Problematic Future
by Mary Soderstrom

The collateral damage from these grandiose developments by oil-rich countries and tiny but powerful states includes a growing shortage of sand that is made more acute by the rapid economic development of what used to be called the Third World. Sand may seem abundant, but in fact it is getting harder to come by. What some call the Sand Mafia has been scouring beaches in North Africa, the Maldives’ islands, India, Cambodia and Thailand to provide sand for the hungry construction market. Environmental damage to coastlines and riverbeds has prompted some countries to ban or strictly regulate it. In 2012, the Chinese government set out seemingly strict guidelines for sand mining in that vast country, but five years later a group of Chinese scientists appealed in Nature for a stop to marauding sand-mining ships scooping up the Yangtze River bottom. In India, a plan for sustainable sand mining was proposed in 2016 but seems to be unenforced. After Sri Lanka’s long civil war ended in 2009, reconstruction projects began scooping up sand from rivers, imperilling water supplies. By 2017, court cases instituted by the government stopped the process in several rivers and along the coastlines.

Some 46 billion tons of sand are consumed every year in construction, and frequently these days, it and its cousin gravel can no longer be found near construction sites. This means that concrete makers must often look farther afield to find supplies within distances that make sense economically. There’s semi-serious talk about shipping sand left by melting glaciers in Greenland to construction sites around the world. Already, builders in Southern California have begun barging sand about 1,600 kilometres from quarries on Vancouver Island in British Columbia to build apartments. Yes, there was sand available much nearer geographically, but it turned out to be cheaper to use the imported stuff. Transportation costs were less for sea travel than for moving sand by truck from sand mines in the hinterland using Southern California’s clogged freeway system. Environmental concerns have also affected sand’s price and availability in North America and Europe as regulations about where and when sand can be taken have been put in place and, what’s more, enforced.

So, perhaps not surprisingly, the construction industry has begun talking about “manufactured sand,” or m-sand. M-sand is basically rock or rubble that is crushed in huge machines, graded according to size, and then used the way naturally occurring sand and gravel are. At the moment its cost is frequently more than river or sea sand, in part because so much ordinary sand is taken with little or no payment from coastlines of countries where there is little or no regulation. 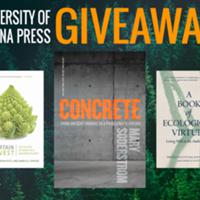 About University of Regina Press

University of Regina Press is located on Treaty 4 Territory, the traditional lands of the Cree, Saulteaux and Assiniboine, and the homelands of the Métis.

A little house on the prairie with big ambitions, University of Regina Press publishes books that matter — in both academic and trade formats. Our non-fiction trade books tend towards the hard-hitting, while most of our scholarly titles are accessible to non-specialists. We endeavour to develop writers into public intellectuals, encourage debate, and inspire young people to study the humanities by publishing books that are both seen and relevant.