Elon Musk and Space X, Jeff Bezos and Blue Origin, Richard Branson and Virgin Galactic — what is it with billionaires and space?

Only 20 years late comes 2021: A Space Odyssey. Bezos has declared he will take off in July; Branson is in a big hurry to blast off too; and Musk, while not booking his own personal commander's chair out on the final frontier, has certainly been firing off rockets like Kim Jong Un in a bad mood.

You wouldn't think becoming the model for the next Dr. Strangelove would be a popular ambition, but the rich are different from you and me. It's always guys, too — Type Affluent males. You never seem to see women playing with their rockets if you catch Dr. Steve's drift.

A space program is not just about one person, of course. It is a noble quest that requires a team of smart, dedicated people working together with a single goal. This is not to be confused with a union. “Working together” and “collective bargaining” — not the same thing at all.

There are of course other things idiosyncratic billionaires can do with their money, many involving volcanoes. El Salvador is showing the way with an exciting new lava-based initiative. That Central American nation plans to use thermal energy from volcanoes to mine Bitcoin. (Dr. Steve would just like to pause for a moment and give thanks that he lives in a world where it is possible to type such a sentence.) You might imagine some mega-wealthy loon would have thought of this already. But no, it's always the same old Death Star routine.

Attention billionaires: why look to the stars when there are insane projects you can pursue right here on Earth? Check out our home-grown Canadian billionaires, for example — they once conspired to fix bread prices. Not sexy enough for international tycoons, apparently. There has yet to be a single Bond flick about the price of Wonder Bread.

Perhaps you find the whole Kentucky Space Derby rather dopey. Regardless, the people behind it are no fools. Not only have these mega-wealthy rocketeers managed to make all this money, they have successfully avoided giving any of it to the government. ProPublica recently revealed that Musk, Bezos, Warren Buffett and other billionaires generally pay tax rates that would make Ayn Rand blush, including years in which they paid no tax at all. Not only have they slipped the surly bonds of Earth — their bonds have slipped the surly clutches of the feds. 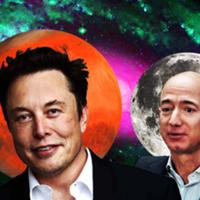 Billionaire Space Pioneers Want to Launch Us Into the 1950s

Billionaires will not stop shooting off their payloads as long as they have the disposable tax-free income. For most of us, filing a return involves accountants, not engineers. That's because we are mere extras in the space opera of life — stormtroopers who perish with a pathetic bleat as the Jedi warriors stride past. (Or to put it another way, members of the public will have the opportunity to become the organic matter that will fertilize the soil of Musk's Brave New World. “A bunch of people will probably die,” said Musk about the first waves of Mars colonists. Hey, the man is honest.)

So, here's a proposal: Donald Trump wanted to create a Space Force. Why not make it a Space IRS? After all, progressive taxation is supposed to increase as one gets higher. How about a new tax bracket located somewhere between the stratosphere and the exosphere? They keep their heat shields but lose their tax shelters.

At any rate you will not catch Dr. Steve on one of those Bezos rockets. No, sir. He is content to stay home and put his feet up in his cozy extinct-volcano lair. If you have an insane world-dominating scheme to discuss, leave it with one of the minions.