Having made enormous fortunes in other enterprises, Amazon’s Jeff Bezos and Tesla’s Elon Musk are now embarking on a private space race: Bezos wants to go to the moon and also build orbiting space habitats, while Musk wants to build the first colony on Mars. If they’re so rich, why aren’t they smart?

As one who was reading pulp SF magazines 70 years ago, I ought to be thrilled by such ideas. After all, one of those early space operas was Robert Heinlein’s The Man Who Sold the Moon, about an American entrepreneur who cons a space program and lunar landing into being. How prophetic!

No, how backward. The Second World War saw the development of both nuclear weapons and rockets, so it was easy to imagine escaping nuclear war by rockets to found colonies on Mars or other planets. And colonialism, after all, had made the West the master of the world. Bezos and Musk are simply recycling this old idea, while ignoring 70 years of scientific progress that suggests human space exploration and colonization are expensively, pointlessly stupid ideas.

Europe had its reasons for conquering the world: it got insanely rich out of the wealth of Asia, Africa, and the Americas. But in economic terms, space colonies would be a financial black hole, costing trillions while returning essentially nothing.

Poop on the moon

Space exploration by robots taught us more about the universe in the past 50 years than we’d learned since Galileo’s first telescope. Humans in space have taught us little except that we’re really high-maintenance.

The first men on the moon wore diapers (and left bags of poop as well as their footprints). It’s cool to fly through the International Space Station, but zero gravity plays hell on astronauts’ bodies: their muscles atrophy, their bones get brittle, and they need months of physiotherapy once they return.

And that’s just from orbital missions. A one-way trip to Mars could take anywhere from four to nine months of free fall and heavy radiation exposure, followed by painful deceleration and life in 38 per cent of Earth gravity. No time for physio; the Martian settlers would need to get right to work with their atrophied muscles and brittle bones, setting up the equipment to create the oxygen they need to breathe, while desalinating Martian water — which they would also need to create rocket fuel for the return trip.

It would be easier if dozens of robot ships arrived first, carrying water, food, and equipment, and landing precisely where the settlers would eventually arrive. A cozy little city could await them, compared to which Earth’s tent cities would look like palaces.

One failed landing, of course, and it’s game over. It’s also game over if the settlers quarrel among themselves, or find they’ve brought along a hitchhiking norovirus (imagine vomit and diarrhea in a spacecraft in zero gravity).

Maybe Musk and NASA could rely on rapid advances in technology, with printers cranking out everything from food to new lungs for the settlers. Or maybe not. Long before we got to that point, people on Earth would be saying, “If we can put people on Mars, why can’t we support them here?”

And for what it would cost to put a couple of dozen masochists on Mars, we could certainly improve the lives of whole nations, with a resulting improvement in the global economy that would enable us to send hundreds of robots all over the solar system. They could send back not just photos but virtual reality files that would let us all scuba dive in the ice-covered oceans of Jupiter’s moon Europa, or fly along the enormous cliffs of Valles Marineris on Mars, without ever leaving home.

Well, what about Jeff Bezos’s plans for a moon settlement and orbiting habitats? He wants to land at the moon’s south pole, where we know some water ice is available. But why waste that water on humans, who will only turn it into oxygen, hydrogen, sweat and piss, when robots could convert it into rocket fuel, shipping lunar minerals back to earth?

Or more likely they’d ship it to the construction sites for space habitats, giant spinning doughnuts where people could live under normal earth gravity while enjoying the suburban pleasures of Silicon Valley.

This was a hot idea in the 1970s, when physicist Gerard O’Neill proposed building huge cylindrical habitats orbiting the earth. He even invented the “mass driver,” a kind of electromagnetic catapult that could launch large amounts of moon rock that would be used to build the habitats.

This made for great artist’s conceptions, but such colonies would need enormously thick walls to protect the inhabitants from radiation, and no windows. They’d literally have to have sunlight piped in to them. Transporting the water, soil, animals, and microorganisms they’d need to build ecosystems would be ruinously expensive, and such ecosystems could collapse from random mutations or sheer bad luck. 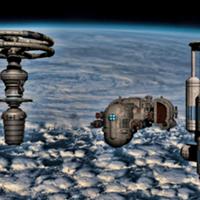 Nevertheless, Bezos imagines millions of such habitats housing trillions of humans, all running on solar power and wishful thinking. More likely a few very rich humans, refugees from a destroyed earth, would be served by millions of robots.

Less ambitious billionaires have already given the game away. They’re buying up land in New Zealand, where they can hole up when the system that made them rich finally collapses.

This again is an idea from the mid-20th century. Everyone was looking for a hideout from the bomb. My grandfather was in a terrible 1951 movie about a search for a haven deep inside the earth; my father thought about Gough Island in the South Atlantic. Esquire Magazine in 1962 published a famous article on “Nine Places to Hide,” from nuclear war, which inspired Jim Jones to move his church from San Francisco to northern California — and then to Jonestown and mass suicide in Guyana.

Bezos and Musk and other space-crazed billionaires, then, would be following in a great Western tradition: create a colony, make a fortune, screw things up, then get the hell out and find a new colony. The idea of staying put and identifying the cause of the screw-up wouldn’t interest them. They’d know they themselves were the cause.

The colonies of North America and Australia were seen as human dumps for Europe’s crooks, subversives, and merely poor. Colonies on the moon and Mars, and in space habitats, would need our best and brightest — who would be far too bright to fall for such a scam.

The brightest of them all, by the middle of this century, may well have simply expropriated the billionaires and developed a planetary habitat here on earth that could slow and perhaps stop the collapse of our climate and ecosystems, and perhaps save some of the million species on the verge of extinction. With the billionaires’ wealth, they won’t buy the moon; they’ll redeem the earth.