[Editor’s note: Feb. 23, 2021: After the publication of this piece, some of the facts were called into question by historians. The Tyee assigned a reporter to follow up, and on Feb. 23 we published a story summarizing our findings. You can find it here.]

When 250 million workers joined the largest strike in human history last month to support the Indian Kisan Andolan, or Farmer Movement, the connection to Indigenous land protests in British Columbia might not have been instantly evident.

But the two struggles have much in common in their resistance against neoliberal nation states and the corporations that influence them. They also share a hidden history that aligns the struggles in a unique field of solidarity.

Indian farmers are fighting the central government over three bills that effectively hand the agricultural market to large corporations, letting them set prices, and turn formerly independent farmers into contractors under corporate control.

Punjabi farmers have taken their protests to the border of Delhi and created blockades on highways, while farmers from other parts of India are doing the same.

The majority of Punjabis in India follow the Sikh faith. Agriculture is central not just to Punjab’s economy, but also to its culture. During the march to Delhi, police brutalized the farmers with water cannons and batons. Despite this, the farmers practiced a central tenet of the Sikh faith, langar (free kitchen) and made food available to both protesters, bystanders and police.

In B.C., a different but connected battle is being waged. Hereditary Chiefs from the Wet’suwet’en Nation have opposed TC Energy’s Coastal GasLink pipeline across northern B.C. since it was proposed. This resistance has led to demonstrations and railway blockades across Canada.

Members of the Secwepemc Nation have been participating in blockades as well, including a group of land defenders called the Tiny House Warriors. They are resisting a project to expand the Trans Mountain pipeline, which is now owned by the federal government. The resistance continues, with rail disruptions and other protests. At each of these blockades, a Sacred Fire burns, a reminder to all present that this is a spiritual struggle.

Underlying these struggles is a little-known shared history between Indigenous peoples and Punjabi immigrants on the West Coast, a history that won’t be found in official records or high school textbooks.

In 1914, 376 Indians on the Komagata Maru were refused entry into Canada based on the racist laws of the Canadian state. The ship sat in the Burrard Inlet for months before being forced to return to India.

Many of the passengers on the Komagata Maru were connected to South Asians already on the West Coast through the Ghadar Movement, which was committed to achieving Indian independence from Britain and ending colonization around the world.

Oral history accounts from both Musqueam and Punjabi traditions share that while the Komagata Maru was in the Burrard Inlet, Indigenous people paddled out to the ship in canoes to provide food for the would-be immigrants. This history can be found on a mural in East Vancouver co-created and painted by Indigenous and Punjabi artists.

The mural includes the Musqueam and Punjabi words for “cousin.” The Punjabi word denotes a particular type of cousin — the children of an older brother of your father. In traditional Punjabi homes, brothers live together. Those born to the younger brother are born into a home with cousins already in it.

That’s the word Punjabis used for Indigenous people on the West Coast. They recognized they had arrived in their cousins’ home. And that their new cousins’ parent was the land.

Both resistance movements against corporate-backed neoliberal states have relied on the spirit of ancestral teachings, or “Soul Power.” While the material reality of colonialism has ended in India, but has not on Turtle Island, there are some commonalities in these struggles.

The founder of the Sikh faith, Guru Nanak, was enlightened after bathing in the Kali Bein, a river that serves as a lifeline to farmers today. The Sikh faith teaches us to honour Divinity within land, air and water, to treat them as we would our mother and father.

Michi Saagiig Nishnaabeg writer, scholar and artist Leanne Betasamosake Simpson explored her spiritual traditions in her essay “Land is Pedagogy,” and found similar beliefs. She recounts the traditional story of Kwezens, who experiences “core Nishnaabeg values — love, compassion and understanding” at every turn.

“She learned to trust herself, her family and her community,” Simpson writes. “She learned how to interact with the spirit of the maple. She learned both from the land, and with the land.” Soul Power.

I invoke these spiritual beliefs and hidden histories in order to rediscover pathways of solidarity between global struggles against neoliberalism and corporate greed.

This is not an attempt to create a false equivalency between the two struggles, as settler colonialism continues to oppress Indigenous peoples on Turtle Island.

It is an attempt to discover and embrace what Indigenous communities and farmers in India may be able to teach us about our relationship to land.

Kanahus Manuel, one of the Tiny House Warriors protesting a pipeline on Secwepemc territory, spoke to me about the commonalities that these struggles share and the possibilities that solidarity can bring. 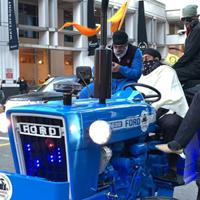 “That’s one thing that’s in common — we have a history of resistance against the British crown. We both know struggle, because it’s in our blood,” Manuel said.

“We have to determine what solidarity looks like between our communities. Let’s start to build our solidarity how we wish to determine it. We don’t need to go by the old rules of the British crown. The spiritual connection between our fight is important — because the fight is never just physical. It’s a spiritual fight. It’s our spirit that drives us to fight. It takes a warrior spirit to stand up to the colonial state that is meant to kill us. It takes courage to stand up to an abuser — and that takes you to a higher state of enlightenment. We touch each other’s heart and soul by knowing each other’s movements and fighting against similar systems.”

As the words of Indigenous Land Defenders resonate with me, I hear the words of the Punjabi poet Sant Ram Udasi, as his poems are being sung by protesters on the border of Delhi.