Two days before the B.C. government announced the plan for a return to school in September, teachers received yet another newsletter from the Ministry of Education telling us in one way or another how important schools are for students. After the first few of these newsletters started arriving back in May, I’d get a visceral reaction whenever I saw one in my inbox.

I couldn’t articulate why I was reacting in this way, until I read this in the July 27 edition:

Global research tells us that school closures disrupt the learning process and long-term outcomes of students. The adverse effects can go beyond learning loss and include implications like food insecurity or loss of access to health services that can be potentially harmful for students. As educators, you play a significant role that reaches beyond the classroom in children’s lives...

I realized then that I was being gaslit.

But while the term “gaslighting” refers to emotional abuse where the victim is made to question their sense of reality, what the Ministry of Education is doing is more like political gaslighting of teachers.

These newsletters are written in a way that completely ignores teachers’ reality of struggling to get the attention of governments about the needs of students in schools for decades now.

They remind us of the importance of schools for children, as though we did not forgo salary increases in order to ensure there was class size and composition language in our contracts so that students would get the learning supports they needed.

As though we did not spend 14 years in a legal battle with the government to regain the class size and composition language in our contracts.

As though we have not decried the uselessness and emotional cost of the Foundational Skills Assessments that the BC NDP promised, while in opposition, to overhaul.

As though our hearts don’t break every day we are told there are no education assistants for our students who desperately need them.

As though we don’t keep food in our classrooms for our hungry students.

As though we have not been spending hundreds of dollars each year on classroom supplies.

As though teachers have not held fundraising campaigns to provide what students need.

As though we don’t know that the shortage of counsellors leads to more suffering for our students.

As though we don’t know about the years of waiting for our students to see a school psychologist.

As if we have not been begging for years for our students to be funded at least to the Canadian average.

And now it’s someone’s job at the Ministry of Education to create newsletters telling us how important schools are for students?

We’ve been saying this for decades!

As if that was not enough, the subtext of the July 29 back-to-school plan was the expectation that teachers would risk their lives to return to teaching 30 students in a 75-square-metre classroom with bad ventilation and no possibility of physical distancing and no mandate for the wearing of masks. 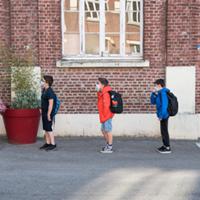 School’s On for September, as BC Officials Spell Out Restart Plan

That announcement was quite Kafkaesque, given how we’ve been repeatedly told for the past four months how important it is to wear masks in enclosed spaces where physical distancing is not possible. Are classrooms not enclosed spaces?

We know that the benefits of being back in school for students have to be weighed against the risks to teachers’ health, so why not say that directly instead of gaslighting us?

And, while we’re all being clear about the role of public education in the province and its importance for the economy, the mental health of children, the social-emotional needs of children and the education of children, the minister should explain why the total amount of spending on education as a proportion of total public spending has gone down.

If the education minister truly believed in the importance of schools, he’d implement all 21 of the BCTF's recommendations in the Healthy, Resilient Schools funding brief. In the meantime, the ministry needs to stop gaslighting teachers.