The 2019 election has always been Justin Trudeau’s to lose. Now he may have done just that.

The most obvious reason is the finding by federal Ethics Commissioner Mario Dion that the prime minister and his office violated the Conflict of Interest Act in the SNC-Lavalin scandal. That flies directly in the face of Trudeau’s consistent denials of having done anything wrong.

It also vindicates two former Liberal cabinet ministers, Jody Wilson-Raybould and Jane Philpott, who said senior government officials and the prime minister improperly tried to influence the criminal justice process as it dealt with allegations of bribery by the Quebec engineering firm.

Dion found that Trudeau and his top advisors worked to “circumvent,” “undermine” and “discredit” a justice department decision to proceed with a criminal corruption and bribery case against SNC-Lavalin, rather than offer a so-called deferred prosecution agreement. Under such an agreement, which the company heavily lobbied for, it would not have faced a criminal prosecution.

In a taped conversation, Michael Wernick, the country’s top bureaucrat at the time, told then justice minister Wilson-Raybould that Trudeau was quite firm in wanting a change in the decision relating to SNC-Lavalin.

But it’s far worse than that.

The ethics commissioner not only found that Trudeau and his inner circle of staffers improperly pressured Wilson-Raybould to change a decision made by her director of public prosecutions in a live criminal case; they did it to further the interests of the company charged, SNC-Lavalin.

That finding does nothing to lift suspicions that the prime minister may have attempted to obstruct justice in this case.

Duff Conacher of Democracy Watch said that Trudeau’s behaviour “crosses the line” into obstruction and that there is enough evidence in Dion’s report to justify a criminal investigation of the prime minister.

Conacher told the CBC that if the RCMP decides not to investigate Trudeau, it must provide the public with a full explanation of the decision.

And something else Trudeau has done will raise questions about his respect for due process.

Trudeau forwarded a report on the SNC-Lavalin affair by Liberal partisan and former justice minister Anne McLellan to the federal ethics commissioner before that office released the results of its own investigation. The prime minister commissioned McLellan to produce the document that he now claims is a “great” report.

The most obvious reason for doing that would be to influence the report of the Ethics Commissioner. Again, that could be seen as interfering in an independent investigation by an officer of Parliament with the intention of influencing his report. Making the rules, not playing by them.

The effects of the ethics commissioner’s findings are legally meaningless. There are no consequences for Trudeau and his staff beyond a possible fine and embarrassment.

It is worth noting that former ethics commissioner Mary Dawson also found that Trudeau had violated four ethical guidelines by accepting a free trip to a tropical island owned the Aga Khan, a billionaire philanthropist.

Trudeau is the first prime minister found guilty of violating a federal statute.

So far, the Trudeau government has been the subject of five ethics investigations, compared to eight such inquiries in the nine years of Stephen Harper’s government. The ethics commissioner found wrongdoing in three of the five investigations into the Liberals, and five of the eight inquiries into the Conservatives.

While the legal consequences for Trudeau are laughable, the political fallout could be disastrous.

Trudeau felt so sure that the initial anger sparked by his treatment of Wilson-Raybould and Philpott had dissipated that he brought back Gerald Butts to work on the Liberal election campaign.

Butts was the former principal secretary who was named by Wilson-Raybould as one of the senior PMO staffers who improperly pressured her to change the decision in the SNC-Lavalin case. With the commissioner’s finding, the presence of Butts on the campaign will be an ongoing embarrassment, and reminder, of what Trudeau and his senior staff did. Don’t be surprised if Butts soon disappears — again.

The most obvious benefactors of today’s developments are Wilson-Raybould and Philpott. Both are running as independents in this October’s election, and Dion’s report will greatly improve their chance of getting elected.

Speaking from Niagara-on-the-Lake today, Trudeau told a largely unresponsive audience that he accepted the findings of the ethics commissioner and took full responsibility for the “mistakes” that he had made in his handling of the scandal.

When asked if Butts and other senior PMO staffers who had mishandled the matter would be fired, he said he had a “great staff” and the buck stopped with him. He offered no apology to either Wilson-Raybould or Philpott.

Trudeau’s second ethics violation in less than four years has been like blood in the water to his political rivals. 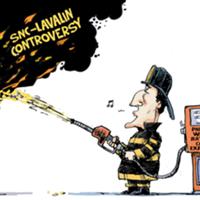 Conservative leader Andrew Scheer said that Trudeau’s actions are “unforgivable.” In a hastily called press conference, Scheer essentially accused Trudeau of being a serial liar, citing his initial claim that the SNC-Lavalin story was false, and later his statement that no untoward pressure was put on Wilson-Raybould.

Scheer’s bottom line? Trudeau looks after his wealthy friends, tilts the board in favour of corporations, is neither transparent nor accountable, and punishes critics who get in his way.

NDP Leader Jagmeet Singh piled on with his own denunciation of the PM, saying he was a champion of the rich and powerful, and that his latest ethics violation is “outrageous.”

What that dynamite may have blown apart is the personal brand of a single man who has become the face of a now seriously compromised Liberal party — staring down the barrel of a federal election in just a few months.