It’s a tough time for the BC Liberals.

A devastating report on money laundering left former Liberal governments looking incompetent, or much worse, for failing to act as a tidal wave of crime enriched the party’s big donors and hurt ordinary British Columbians.

Former premier Gordon Campbell did it from 1993 to 2010. Former MLA Bill Bennett offered an inside look at the process when he was fired as a cabinet minister in 2010. Being in Campbell’s caucus was to submit to battered wife syndrome, he said. Preventing internal rifts is the most important task for any Liberal leader. In a two-party race, the centre-right coalition starts every campaign with a big advantage over the NDP.

But if the right splits, everything changes. In 1991, the NDP won a majority of seats even though the Socreds and Liberals won 57 per cent of the vote.

The Liberals are far from splitting. But the decision by MLAs Rich Coleman and Laurie Throness to jump into the abortion debate — and make trouble for Wilkinson — shows there are cracks in the coalition.

Both spoke at an anti-abortion rally on the legislature steps. Coleman told the crowd he was praying for them.

“There really are things in our society we have to stand up for,” he said. “The fact that somebody wants to do things with the right to life at the end of life, or the right to life at the beginning of life, is totally, totally wrong for me.” (Coleman later noted he didn’t use the word abortion, a distinction without a difference, and claimed his religious freedom was under attack.)

Throness unequivocally staked out a position at the extreme end of the anti-abortion campaign. “I’m pro-life because it’s a matter of faith and natural law, that life is sacred from conception until natural death,” he told about 100 people who attended the march.

Our democracy would be stronger if politicians were free to discuss their own policy views even when they differ from the positions of their parties. (Watch Sean Holman’s documentary Whipped to see the damage done by the required slavish devotion to the party line.)

But the abortion debate isn’t a policy discussion. It’s mainly an attempt to impose one group’s religious views on society, as Coleman and Throness confirmed in their speeches.

That’s why political leaders across the spectrum say the debate is settled and their parties have no plans to revisit the issue.

Liberal Leader Andrew Wilkinson took that route after Coleman and Throness spoke. “Our position as a party has not changed in that we support a woman’s right to choose,” he tweeted rather tersely, without saying why he felt it necessary to share that information.

But two powerful MLAs had just said they believed the Liberal position was not just wrong, but immoral. Coleman, who represents Langley East, has spent almost a quarter century as an MLA, mostly in important cabinet roles. Throness, who represents Chilliwack-Kent, was only elected in 2013, but at 61 has spent his life in politics — he advised Preston Manning, Stockwell Day and Stephen Harper. He’s the Liberals’ critic for the ministry of children and family development. Both knew they were undermining the party’s leader.

So when two prominent Liberal MLAs say to many of the people sharing the tent the party is wrong on an issue they believe is vitally important, things get complicated — especially for the leader.

The abortion issue has already helped sink one centre-right party. There were lots of reasons for the collapse of Social Credit, but the rise of the social conservative wing — and the divisive abortion issue — under Bill Vander Zalm played a significant role.

For Coleman, it was the second conflict with Wilkinson in two weeks.

In the legislature on May 2, Coleman was debating legislation that would require applications to remove property from the Agricultural Land Reserve to come from municipalities rather than individual owners.

And he compared the landowners to Holocaust victims, an analogy so offensive it should need no discussion.

Coleman first offered a classic non-apology on Twitter. “Because of the emotion of today I drew an analogy was insensitive,” he tweeted. “I apologize to anyone who took offence.”

Less than 15 minutes later, he smartened up (perhaps with some help from the premier’s office). “To be clear, I apologize without reservation [f]or drawing the parallel I did earlier today. The Holocaust is a unique historical evil event that must be recognized in order to be remembered.”

Meanwhile, Wilkinson did damage control on Facebook, again without mentioning Coleman. “The Holocaust is a black mark on human history, representing an evil that must be recognized by us all. Drawing parallels between discriminatory legislation and the Holocaust is absolutely inappropriate and on behalf of the BC Liberal Caucus we reject any comparisons.”

Except a senior member of caucus just did exactly that.

Wilkinson is in a tough spot. It’s a lot easier to maintain unity when a party is in power and cabinet posts and other perqs can be used to punish or reward.

It’s also easier if the leader and party are doing well in the polls. But the Liberals and Wilkinson are floundering while Premier John Horgan has the third highest approval rating among provincial leaders. 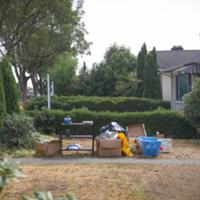 BC Libs’ Leader Says Renting Is ‘Fun’ and ‘Wacky.’ Did He Have to Move Six Times Like Me?

Wilkinson has some additional handicaps. He won the leadership in five ballots. Only 16 per cent of party members made him their first choice as leader. He’s another Downtown Vancouver type, and as a result easily mistrusted by the Fraser Valley social conservatives and party members in the Interior and North. (Though Throness was one of 13 MLAs endorsing his leadership bid.)

Wilkinson has also made his own high-profile blunder criticizing the government’s efforts to help tenants by saying renting was “fun,” a “rite of passage” during “a kind of wacky time of life.”

None of this is to say the BC Liberals are going to unravel. But after 16 years in power, the party is learning once again how difficult it is to keep the party’s big tent from collapsing in a messy heap.