Shaken, stirred-up and mindful of the eastern monster Sandy, many British Columbians could be reflecting upon extreme natural events on our coast. And again upon the weather, now that the usual rainy or snowy conditions have settled in. Before you forget the prolonged summery weather and autumnal glow of not so long ago, consider this: what if such warm, dry growing seasons become the rule not the exception on the B.C. coast? Weather isn't climate, but if that was a sample of the "new normal," drinking water, wild salmon, forests, and coastal residents could be in for more trouble. 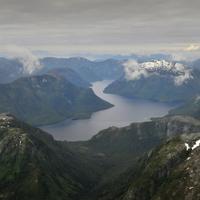 As you contemplate the fall storms, spare a thought for the Great Bear Rainforest, where the future is still uncertain, the horizon is not serene but troubled by spectres of tsunami debris and oil tankers, and some of the forests are still being logged at excessive rates. The Great Bear Rainforest agreements of 2006 have still not been fully implemented.

The provincial government, First Nations, industry and conservation organisations have been working for years to make the Great Bear vision a reality but since 2009 progress has slowed and now seems to have been stalled by a lack of government and industry leadership. In 2006 all parties agreed to support the transition to a conservation economy, and to designate 70 per cent of natural, background levels of old-growth forest off-limits to logging. In 2009 all parties agreed to an interim compromise: meet a 50 per cent milestone and move to the 70 per cent goal no later than 2014.

Falling short of the scientific prescription

Scientists who helped develop the new management regime (seeking to achieve healthy ecosystems and healthy human communities) for the Great Bear Rainforest are clear that we need to conserve 70 per cent of the natural levels of old-growth forest in order to keep the whole system functioning properly. Currently, only 50 per cent of the forest is off-limits to logging. That's a praiseworthy achievement but it’s still insufficient. Too much habitat is being logged to maintain the health of the forest and the species that depend on it.

Meanwhile things continue to heat up in the rainforest, as they have noticeably for decades. We cannot predict what the outcome will be but we can with certainty say that future forests will have a different mix of species, different soils and disturbance regimes compared to contemporary forests. And we can predict that the cutblocks of today will not eventually replace the old-growth stands we've logged. Secondary coastal forests will regrow, but even if they are allowed to get old (300+ years) they will not recover to the primary condition -- they will be different in composition, structure and function.

In recent, protracted negotiations about flexibility in timber supply and criteria for "functional old growth," industry and government have invoked "ecosystem recovery" as a management goal -- on paper anyway. But recovery of coastal old-growth forest, which requires several centuries to fully develop, is an inappropriate anachronistic concept, given rapid climate change, system unpredictability, and scientific uncertainty. Old coastal forests are effectively non-renewable resources in the present circumstances. For that reason alone, you could argue that the remaining large intact areas of old-growth temperate rainforest -- globally rare to begin with -- should not be logged.

What ecosystems do for you and me

The Great Bear Rainforest is one of the jewels of British Columbia's dazzling, globally significant array of climates, landforms and ecosystems. The province has become a refuge for species, such as grizzly bears and Pacific salmon, that have declined precipitously or been eliminated elsewhere across their historical range. British Columbia also has a global stewardship responsibility for a large proportion of the world's remaining ancient temperate rainforests, wild rivers and rich marine ecosystems. Fulfilling the terms of the Great Bear agreements is vital to the province living up to its responsibility, and to ensuring that this rainforest system will remain part of Canada's living legacy in the face of challenges from natural resource demands in a changing global climate.

The conservation of natural ecosystems has clear and immediate benefits for adapting to and mitigating climate change. B.C.'s temperate rainforests store millions of tonnes of carbon, more than 50 times the province's annual emissions of greenhouse gases. Logging results not only in severe losses to carbon stocks, but also in lower rates of sequestration for decades. The Great Bear Rainforest is an important carbon sink that plays a key role in the province's carbon budget. Large-scale, interconnected forests can help conserve the biological richness of the Great Bear, with the added benefit of sequestration and storage of carbon.

What the government gives the government can take away, and it can renege on its promises. The recent deliberations of the Special Committee on Timber Supply in the interior (looking for wood in all the wrong places), and the Province's subsequent willingness to disavow land use plans and go after timber in designated reserves, emphasize the need to solidify the Great Bear agreements. It's time for the B.C. government to follow through on its commitments by fully implementing the remaining conservation milestones of the Great Bear agreements as soon as possible.