Eliminating tolls on the Port Mann and Golden Ears bridges Sept. 1 is welcome news for lower and middle-income earners. But it’s only a good start.

Tolls are regressive taxes that disproportionately favour the rich over “little people.” B.C. New Democratic Party Premier John Horgan deserves credit for wiping out the tolls and quickly keeping a campaign promise to do so.

But there are many other regressive taxes in British Columbia including sales taxes, wine, beer and liquor taxes, and the Medical Services Plan premiums that the NDP has also pledged to eliminate. It’s a long list.

The one true progressive tax is on income based on the ability to do so. The more money you make, the more tax you pay.

But tolls are simply unfair, and here’s why:

The Port Mann’s toll costs weekday drivers $1,500 a year and up to $4,500 for commercial truckers, according to B.C. government estimates – but millionaires didn’t suffer to pay it;

Only those who used the two bridges paid tolls, while driving the $600 million new highway to Whistler cost nothing;

Even with tolls, both bridges were losing hundreds of millions of dollars a year;

Tolls are costly to administer and only add to the expense of the bridges.

Those, like the inconsistent BC Liberals, who complain that removing bridge tolls is “subsidizing” Metro Vancouver drivers are wrong. We don’t ask northern B.C. residents to pay for snow removal on highways or other government services that cost far more there than in the south.

Weaver likes tolls mostly because he wants to force cars and trucks off the road in a well-intentioned but wrong-headed approach to reduce air pollution. Weaver said in a statement that tolls “are an excellent policy tool to manage transport demand.”

“Eliminating tolls will increase congestion in Metro Vancouver as more people turn to their cars. It sends precisely the wrong message to commuters who may now opt out of public transit,” Weaver claims.

But Weaver’s approach doesn’t work in Metro Vancouver because of the high cost of housing and insufficient public transit to make commuting by transit feasible for many residents.

It’s obvious that hundreds of thousands of drivers crossed the old Port Mann Bridge and continued to do so over the new one. But they had to pay through the nose to do so.

It’s the same flawed reasoning Greens use to promote revenue neutral carbon taxes that only penalize lower and middle-income workers who need to drive to their jobs. Yet these taxes don’t contribute a dime towards public transit or other green initiatives.

And the carbon tax hasn’t actually reduced greenhouse gas emissions either, as the Canadian Centre for Policy Alternatives pointed out last year.

That BC Liberal “tax shift” — one that Weaver helped fashion before entering politics — merely benefitted those with higher incomes who could buy Tesla or Prius hybrid cars. It did not provide real alternatives.

But at least Weaver is consistent. The BC Liberals are driving from ditch to ditch, first imposing unfair regional bridge tolls on drivers south of the Fraser River, then promising to cut them in half during the election and finally making a deathbed pledge in their abortive throne speech to match the NDP and get rid of the tolls altogether.

“The concern that I have today is actually related to how the tolls are now going to be paid for,” says BC Liberal MLA Shirley Bond.

The answer is clear: from provincial general revenue instead of by gouging drivers forced to use the two bridges. Not only is that more fair but it also allows progressive personal and corporate income taxes, which contribute $9.1 billion and $3.4 billion respectively of B.C.’s $50 billion budget, to pay for infrastructure like bridges. Other sources like natural resource revenues also contribute.

Had the B.C. Liberals actually conducted the tolling policy review former transportation minister Todd Stone promised back in 2013, they just might have figured out the obvious: tolls are unfair.

We don’t have to look far to find out how bad things can get with an unfair tax system.

Next door Washington is surprisingly the most regressively taxed state in the U.S., but that’s primarily because it has no income tax and relies instead on sales taxes and other regressive measures.

That could be one reason Washington is home to both Microsoft mogul Bill Gates and Amazon multibillionaire Jeff Bezos, two of the world’s richest men. 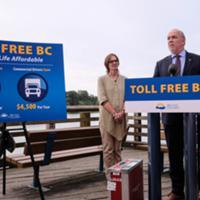 The Big Risk in NDP Plan to End Bridge Tolls

“There’s the growing feeling among people in lower income brackets that Washington’s super wealthy benefit from kinds of income that the taxman doesn’t touch, and simply are not paying their fair share to support the place that made their wealth possible,” writes Ashley Archibald in Washington’s Real Change progressive weekly newspaper.

“In 2015, people making less than $21,000 a year paid 16.8 percent of their family income in taxes compared with just 2.4 percent for the wealthiest, those making over $507,000, which does little to improve economic conditions and systematically moves wealth upward system wide,” Archibald argues.

“Seattle’s start-up culture and tech firms exist in a frothy milieu of idea, creation and rampant acquisition, but it has no capital gains tax. Property values shoot up, goosed by an influx of high-paid tech workers, foreign investment and low housing turnover, but government is tightly constrained in how much of those gains it can recoup.”

The result, according to Archibald: “A state with vast wealth and resources that struggles to fund basic services and local governments forced to rely on two uniquely regressive forms of revenue, property taxes and sales taxes, to pick up the slack.”

British Columbia needs to take heed and keep working to reduce regressive taxes like tolls to make the province more affordable and fair for all.