"He who does evil that good may come, pays a toll to the devil to let him into heaven." -- A.W. and J.C. Hare, English clergymen 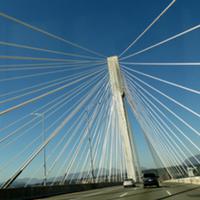 It's time to terminate toll bridges -- and stop screwing Surrey, Langley and Maple Ridge residents with an unfair, regressive tax on travel that costs hundreds to thousands of dollars a year.

Yet the BC Liberal government is the devil that wants still more tolls, in addition to those already on the Port Mann Bridge and the Golden Ears Bridge.

Tolls on bridges are a regressive, annoying and unnecessary tax that hurts lower-income working people the most.

And toll bridges totally discriminate based on where someone lives -- many Metro Vancouver residents can drive endlessly without seeing one, while others have to cross twice or more a day.

You can drive to ski at Whistler on the $600-million Sea To Sky highway for free -- but cross the Port Mann or Golden Ears to work and you pay, for decades to come.

And yet both are losing money.

So why do we tolerate tolls when there's an easy solution to take the tolls off existing bridges and keep them off future projects?

It's called the provincial budget, and it pays for all our health care, education, social programs and more.

The government collects revenue from progressive income taxes, among other sources, which means that the more money you make, the more tax you pay as your fair share in our provincial expenses.

Instead, our tax system should simply include the cost of building and maintaining the bridges in the $48-billion annual budget.

That way we can eliminate not just the tolls, but all the expensive equipment and administration needed to take a photo of your license plate or use a transponder to tax you every time a bridge is crossed.

Paying for the bridges would require a very minor personal income tax increase -- and how about a luxury vehicle surtax and other measures aimed at making sure those doing very well pay a little more than those struggling from paycheque to paycheque?

Call it the Port Mann Porsche payment. Or the Golden Ears Lamborghini levy.

Tolls on the $3.3-billion Port Mann Bridge are scheduled to continue until 2050 or it is paid off.

The Golden Ears Bridge cost $808 million to build in 2009 and will be tolled until most of us are in our golden years, through to 2041.

Even worse, the bridge needs a new tolling system upgrade for a mere $5 million, despite the structure being only seven years old.

So is the Port Mann Bridge, estimated to lose $309 million over the next three years.

The reasons are obvious -- drivers are toll adverse. As a result, we have massive traffic congestion in New Westminster and elsewhere as cars and trucks try to avoid the tax.

Unlike the BC Liberals, legislators in Texas are currently looking at eliminating toll roads, another form of unfair taxation.

And once upon a time, even B.C. Transportation Minister Todd Stone seemed to be concerned about the unfair impact of tolls, telling the Surrey Board of Trade in November 2013 that it was a serious issue.

"You start looking at the crossings at that point that potentially could have tolls on, and to me this then becomes an issue of fairness and equity for the hard-working people of South of the Fraser," Stone said then -- but now plans yet more tolls instead.

Lastly, some environmentalists will scream at this idea -- they want tolls because they think financial penalties reduce vehicle use and cut pollution.

But what has clearly happened is that drivers take even longer and more exhaust-fume producing detours to avoid a toll, not park their cars.

Plus, drivers need an accessible, fast and affordable public transit choice if they are to leave their vehicles at home, and that simply isn't available to most car commuters.

Can tolls really be terminated? You bet.

Thanks to public pressure, former premier Gordon Campbell was forced to drop the Coquihalla Highway toll in the Okanagan after trying to privatize it but keep it tolled.

It's time to stop tolerating tolls.