What’s going on with the new government? Is John Horgan premier yet? When does the good stuff start?

John Horgan is not premier of B.C. quite yet. Hence the awkward but frankly endearing spectacle of premier-designate Horgan and Still-Premier-No-Really-It’s-True Christy Clark standing together to offer support for the victims of B.C.’s wildfires. It has been a pleasant moment of non-partisanship that should not be overlooked. After all, if this was happening anywhere near Washington, D.C., Trump supporters would be arguing that fire is our friend and leftist firefighters just hate good old American barbecued pork ribs.

Meanwhile there’s plenty going on. The new government is hiring, which is great, because this is just the time of year when people are looking for summer jobs. You know the kind of thing — temporary gigs that offer great experiences, some job training, and a little walking-around cash. Camp counsellor, running a stall at the Pacific National Exhibition, chief of staff for Premier Horgan — likely a brief adventure and then it’s over and you’re back to staring out the window at the rain. You’ll always have the memories though. 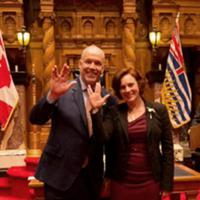 He’s a fine choice for the job — plenty of experience with premier Glen Clark, which in political terms is like being a veteran of Navy Seal Team Six. Meggs could also give Sean Spicer plenty of tips on media relations — he was the Vision Vancouver city councillor who was always trotted out before reporters on the tough stories and yet he succeeded in neither going viral nor being portrayed by Melissa McCarthy.

The NDP-Green administration has announced a number of other new hires this week. You might think filling jobs in such a precarious situation would be difficult. Applicants might be leery of the uncertainty, and then you would have to weed out applicants like Donald Trump Jr. and General Mike Flynn, up here as part of the Witness Protection Program. But in fact Horgan seems to have found some quality people (not to be confused with the kind of “high-quality people” you definitely want to avoid).

Filling the chief of staff role is important, but if the NDP-Green partnership wants those jobs to last long enough for the dental plan to kick in, filling the Speaker’s chair will be more so. Right now the leading candidates for Speaker are a Bose hooked up to microphone on the premier’s desk, and a life-size Charlie McCarthy doll. A Liberal MLA would be Horgan’s preferred choice, but suggesting that to Clark might result in the kind of dangerous flare-up that we have already had too many of this summer.

Horgan and company insist that they are optimistic about the future of the new government. And it’s true that unlike a PNE gig, there is no set expiry date to a post with the NDP-Green regime. Spin the big wheel and who knows? Maybe you’ll win the giant stuffed Panda of Confidence. Especially if the government can find a Speaker.

Actually I know a guy — right now he’s running the ring toss at a fair in Des Moines, but he should be available if the money’s right. This guy could talk Ebenezer Scrooge into picking up a lunch tab. If not him, I’d go for a Grade 8 teacher. You need that battlefield experience.