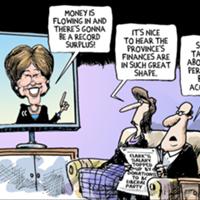 Why do so many BC Liberal operatives currently face criminal charges?

And why have so many other BC Liberals been convicted, disciplined, forced to resign, fired or otherwise criticized for breaking the law, violating rules or misbehaving?

With a criminal charge being laid last week against former BC Liberal government communications director Brian Bonney, and with two other party operatives already facing trials, those are questions that need to be asked of Premier Christy Clark.

Of course, everyone facing charges has the right to be presumed innocent and have their day in court, because allegations are unproven.

But nonetheless, the answer to the cause of the BC Liberals' legal problems could be disturbing.

Some may thoughtlessly say it's simply that the party attracts the wrong people, those without a moral compass. Others may think politics is endemically infected with bad apples.

But a more compelling analysis starts with looking at the nature of the charges, convictions and rule-breaking that have happened or is alleged to have taken place.

BC Liberal operatives have run into problems in mainly a few areas: breach of trust, election financing and deletion of government records.

The most common allegation is breach of trust, a Criminal Code violation with potentially serious consequences upon conviction -- up to five years in jail.

Bonney faces one breach of trust charge, and though a temporary publication ban has prevented media from reporting what happened in court last Tuesday, he and another ex-BC Liberal Party staffer -- Mark Robertson -- both had faced Election Act charges along with their company over the "Quick Wins" scandal where government resources were improperly used to court ethnic community votes.

Last week those earlier charges were dropped, but Bonney and Robertson's firm Mainland Communications pleaded guilty and was fined $5,000.

Bonney and Robertson were originally charged with making "an unauthorized election expense" for providing the services of campaign worker Sepideh Sarrafpour in the Port Moody 2012 byelection without informing candidate Dennis Marsden's financial agent, a violation of the Election Act.

Sarrafpour's story was disturbing when she subsequently went public, telling The Tyee: "I was going through hardship, really. I was almost for one year jobless, boycotted and blacklisted by Liberals."

The BC Liberal Party repaid $70,000 to the province for time Bonney spent improperly doing partisan work at public expense and fired him. And Clark's deputy chief of staff Kim Haakstad was fired, while other staff members were reprimanded for breaching the public service code of conduct.

Meanwhile, BC Liberal Party executive director Laura Miller was also charged in December with breach of trust but in Ontario, for actions that police allege she took to delete government records on the gas plant closure scandal in that province, when she was deputy chief of staff to then-premier Dalton McGuinty.

Miller initially resigned her BC Liberal top job but was recently rehired, with Clark calling her a "person of integrity."

Miller has vowed to exonerate herself after accusing the Ontario Provincial Police of bias and saying the charging process lacked "impartiality and fairness" because of a complaint she filed with the Ontario Independent Police Review Director.

Cabinet minister Rich Coleman defended Miller's re-hire, saying the charges were "a pretty old case" and that: "Our issue was, is she qualified to do the job? People still want her to be here."

And then there is George Gretes, the ex-ministerial assistant of Transportation Minister Todd Stone who was forced to resign and charged with lying under oath to the freedom of information commissioner over allegations he "triple deleted" government information sought in an FOI request related to the murder and disappearance of aboriginal women on northern B.C.'s Highway of Tears.

Disturbingly, Tim Duncan, the former staffer who blew the whistle on Gretes, said that some government officials attempted to make him out to be the bad guy.

"They had accused me of lying, essentially. I'm telling the truth to the commission and everybody else is saying he's a disgruntled employee, he's lying, he's trying to make us look bad," Duncan told CKNW Radio earlier this year.

Going further back, the checkered BC Liberal record includes Election Act violations in 2009 when then-Liberal MLA Kash Heed's campaign was found to have overspent campaign limits. The former solicitor general was fined about $8,000, but allowed to keep his seat.

Heed said he was unaware of excess spending, and his campaign manager Barinder Sall pled guilty to Election Act violations, receiving a $15,000 fine and one year's probation -- but not before he alleged that up to $40,000 might have been improperly spent. No further charges were laid.

And the biggest breach of trust case of all was the BC Legislature Raid case, where after nearly seven years of claiming innocence, former BC Liberal ministerial aides Dave Basi and Bob Virk made a sudden guilty plea over charges they accepted benefits for providing confidential government information about the $1-billion privatization of BC Rail to lobbyists for one of the bidders.

The lobbyists, one a prominent BC Liberal, were not charged and cooperated with the police investigation.

Regardless of guilt or innocence, it's clear that improperly funding election campaigns -- occasionally with taxpayer dollars -- and either providing confidential government information or deleting it led to BC Liberal problems, charges and sometimes convictions.

Fear of losing power lies behind most of these actions -- and while scandals don't generally defeat governments, when the sheer weight of allegations reaches this level, it can go beyond scandal to character and integrity, an issue in every election.