"In a room where people unanimously maintain a conspiracy of silence, one word of truth sounds like a pistol shot." -- Czesław Miłosz, Nobel Prize-winning Polish poet 1911-2004 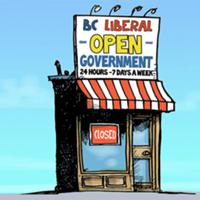 There is a conspiracy of silence in B.C., not just in one room but across the political staff of an entire government, all reporting to BC Liberal Premier Christy Clark.

And when a whistleblower spoke one word of truth about how senior officials, including staff in the premier's own office, were "triple deleting" emails in order to evade Freedom Of Information requests, the government tried to take a shot at his reputation, reports say.

But last week Tim Duncan was the only one left standing with his integrity intact after his whistleblowing on widespread rule-breaking helped lead a special prosecutor to file two charges against George Gretes, formerly ministerial aide to Transportation Minister Todd Stone.

Last week, Duncan described the devastating impact of the government's portrayal of him when the story broke.

"They had accused me of lying, essentially. I'm telling the truth to the commission and everybody else is saying he's a disgruntled employee, he's lying, he's trying to make us look bad," Duncan told CKNW Radio's Shane Woodford in an interview Friday.

"Any employer I ever apply to for another job will read that, and had that been allowed to stand, I mean, you are totally wrecking not only my ability to get another job, you are just totally wrecking me," Duncan said. "I've told the truth and every step of the way I've been proven correct."

"And they get paid to do this -- taxpayers are paying for them to do this," Duncan added.

Gretes is charged with lying under oath when testifying in Information Commissioner Elizabeth Denham's investigation into allegations he deliberately deleted emails related to the Highway of Tears murder investigation to thwart a Freedom of Information request. Duncan had attempted to follow the rules.

Gretes' innocence or guilt will be determined by a court in Victoria sometime after his first appearance April 20.

But we know from Denham's resulting report, titled "Access Denied," that a culture of deceit infected the way political staff in Clark's government dealt with FOI laws.

Clark's deputy chief of staff Michele Cadario was found to have regularly deleted emails in apparent contravention of clear rules and guidelines to preserve government communications, with Denham finding that Cadario had almost no email records over a two-year period. Stone said he had also routinely been triple-deleting emails.

But Duncan is not convinced anything has changed since he blew the whistle on rampant wrongdoing.

"It is absolutely mandatory you have integrity in a top level of government. There is none out there. There is none in Victoria. Anyone who thinks there is, is delusional," Duncan told CKNW.

Indeed, integrity is more besieged under the BC Liberals than protestors at a Donald Trump rally.

Two other ex-BC Liberal aides will go on trial in August for their alleged roles in the ethnic outreach scandal of 2012, facing three counts of violating the Elections Act.

Brian Bonney and Mark Robertson could face up to a year in jail and/or fines up to $10,000 if found guilty.

And the BC Liberal Party's executive director Laura Miller resigned in December after police laid breach of trust and mischief charges against her and another former top Ontario Liberal government aide for allegedly deleting emails related to a scandal involving the decision to scrap two gas-fired power plants. The political decision cost taxpayers up to $1.1 billion.

Miller returns to court March 23 and has promised a vigorous defence. Clark has said that Miller is known as "a person of integrity."

The court process will help show whether the BC Liberals are people of integrity – or whether there has been a conspiracy of silence.

Voters will also decide which in May 2017.