Are we witnessing the beginning of the end for the oil industry? It's reporting season in the financial world and like it or not, fossil fuel companies are being forced to erase billions from their balance sheets to reflect devalued or worthless oil reserves. 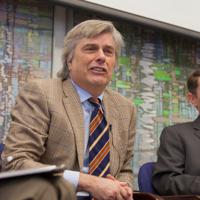 Energy companies treat their share of these reserves as the equivalent of money in the bank and report them as assets.

Back in 2014, oil was worth about $110 per barrel. Now it hovers around $40. That means that about $120 trillion in global assets have just disappeared, at least until oil prices rise again.

And that's not likely to happen anytime soon -- or perhaps ever. Much ink has been spilled trying to explain the reasons for the global price collapse. The short answer is that Saudi Arabia is weary of cutting production to prop up prices and ceding market share to new entrants like U.S. shale gas and Alberta oilsands.

Is anyone going to cut production to prop up prices? Saudi Arabia's arch-enemy Iran, free from years of sanctions, called the prospect "ridiculous." Junior producers in North America raked up debt when oil prices were high and have to keep pumping, often at a loss, just to service their loan payments.

Writing off billions in value

The biggest commodity cartel in history has come flying apart, and the days of artificially inflated oil prices might be over forever.

But isn't cheap oil bad for the environment? No -- the reality is exactly the opposite. High prices have brought investment, exploration and development of fossil fuels, and the industry's interests have perversely driven public policy. That all ends as prices plunge.

And as OPEC profitably demonstrated for decades, oil consumption is remarkably inelastic. When prices are high, people will pay whatever it takes to fill their tanks. When prices fall, they don't drive that much more. However, lower prices do offer governments a fine opportunity to introduce carbon pricing to finance our transition to cleaner fuels.

How much trouble are the oil producers in? Companies can only claim an oil deposit as a "reserve" if they have a reasonable likelihood of extracting the oil and selling it profitably. And in 2009, the U.S. Securities and Exchange Commission updated its reporting standards to require companies to write off deposits not developed within a reasonable time frame.

The collapse in prices means a lot of the reserves being carried on companies' books are now worth much less or fail the accounting tests and can now longer be counted as assets.

Chesapeake Energy is one of the big contributors to this bloodbath. The company was recently forced to write off 45 per cent of its oil and natural gas reserves, the equivalent of 1.1 billion barrels of oil. Lower prices mean the deposits can't be brought to market profitably and have no value on the companies' balance sheets.

Bad news for Chesapeake shareholders, good news for the climate. Some 530 million tonnes of CO2 emissions are now staying in the ground -- the equivalent of taking 100 million cars off the road for a year.

The SEC rules also require a "standardized measure" of company value in annual filings, including the reflections of price changes on reserves' value and shareholder equity.

According to the standardized measure in Chevron's SEC filings, its oil and gas reserves were worth $180 billion less than a year earlier. Likewise Imperial Oil reserves took a hit of almost $38 billion. Exxon Mobil's reserves lost $260 billion.

All this affects share prices. The Financial Times reported that since June 2014 "The 300 largest global oil and gas companies have... seen $2.3 trillion sliced from their stock market value." Bondholders have also taken a bath, with $150 billion in value lost over the same period.

Writing's on the wall

The 2014 price crash was largely a result of the shale gas boom in the U.S. This extra supply -- only two per cent of global oil and gas demand -- was enough to drive down prices.

Electric vehicles could cause a similar price crash by creating a similar small drop in demand for oil. Tesla is now taking orders for its new $46,000 sedan, and General Motors is racing to offer a cheap, long-range electrical vehicle.

The winners of this race will be consumers and the climate. The losers will be oil industry investors, blindly hoping that someday prices will once again be over $100.

Electrical vehicles have a tiny global market share today -- one for every thousand cars on the road. But a recent analysis shows that by 2023 rapid adoption of cheaper, better electric vehicles could trigger another oil price crash.

The shift would mean a permanent reduction in oil prices and the loss of trillions invested around the world. Perhaps that's why the Saudis no longer want to play the long game of propping up global prices. Of course the price of oil might rebound in the interim. But if that market change is permanent, so too are the losses.

The writing should be on the wall. Canada faces big risks if we don't quickly transition from fossil fuels -- or, for that matter, even if we do.

The companies developing Alberta oilsands and coal mines have made commitments to do $21-billion worth of environmental remediation once the reserves are gone. But the provincial government has security deposits for less than 10 per cent of that. How can the companies pay for the work if they're broke?

The industry recently asked Ottawa for $500 million to clean up "orphan" wells. They didn't get it in last month's federal budget, but this enormous subsidy for what was a profitable sector might re-appear in coming infrastructure spending.

Other mega-projects are plodding along as if nothing has changed. The Site C dam construction proceeds apace, largely justified by the imaginary need to power B.C.'s non-existent liquefied natural gas industry. The Trans Mountain pipeline project to bring oilsands bitumen to the coast plows ahead, even as Jeff Rubin, former CIBC chief economist, warns that oilsands companies are "hemorrhaging red ink" and "going bankrupt." "There's no economic context for any of the pipelines being proposed," he said recently in Vancouver.

We've lived through more than a century of unprecedented prosperity largely based on cheap and plentiful energy from fossil fuels. It's therefore hard to imagine a future that doesn't include coal, oil or natural gas. But the cracks in this once-unassailable worldview are obvious. Peabody Energy, the world's largest private coal miner, now teeters on the verge of bankruptcy.

We may soon see the oil industry toppled, and those unwise investors who are the last to make for the exits burned.