"A reformed and modernized system will make this ghost government more accountable to the public it serves." -- Kentucky auditor Adam Edelen, 2012 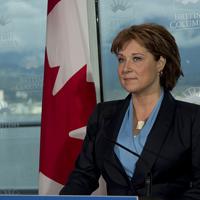 BC Government Put Itself Above the Law with Email Deletions

Premier Christy Clark is running her own ghost government in British Columbia -- and unlike Casper the Friendly Ghost, this BC Liberal version is extremely scary.

Clark's ghost government operates in the shadows, illegally triple deleting emails so no record remains anywhere, communicating verbally and on Post-It notes later destroyed -- all to keep the information that forms the vital public record invisible to media, the public and opposition parties.

Kentucky's ghost government was discovered by state auditor of local government Adam Edelen, who found in 2012 that $2.7 billion was being spent by over 1,200 special districts, with absolutely no legal, financial or organizational reporting to taxpayers.

Here at home it was Elizabeth Denham, B.C.'s independent information and privacy commissioner, who investigated and blew the whistle on Clark's ghostly government and its ghastly practices of flagrantly breaking freedom of information (FOI) laws.

The RCMP was even alerted after Denham reported that George Gretes, then-ministerial assistant to Transportation Minister Todd Stone, had during her investigation "admitted to giving false testimony under oath, and aspects of his testimony was contradicted by other evidence."

Denham -- and through her the public -- only uncovered this outrageous behaviour because Tim Duncan, another transportation ministry staffer, contacted her with allegations that Gretes wilfully deleted government records related to the Highway of Tears.

Last week, Technology Minister Amrik Virk -- no stranger to his own controversies on following the rules -- hired former FOI commissioner David Loukidelis to advise the government on how to address Denham's 11 recommendations and five findings, giving him until Dec. 15 to report.

But make no mistake -- the email scandal is no rogue operation.

Clark's own deputy chief of staff, Michele Cadario, was found by Denham to have used a "broad interpretation of transitory records" in order to achieve the "permanent deletion of almost all emails she sent in the course of her work."

Clark herself said she was unaware of the triple deleting to frustrate FOI requests -- and refused to dismiss or apparently even discipline Cadario or others who were named in Denham's report.

Yet Denham's report states that Cadario "has not personally retained a single email she has ever sent from her government email address."

Serious to everyone but Clark

Having worked in a past premier's office as communications director, I am astonished that a top official like Cadario not only broke the rules but could then claim she operates with no email trail or record of her work. It defies imagination.

As Paul Willcocks wrote in The Tyee, some of Cadario's emails were nonetheless found -- but only those in the records of Clark's chief of staff Dan Doyle.

As Denham says: "It is difficult to overstate the seriousness of the problems that my office discovered in the course of this investigation."

But those problems aren't that serious to Clark. She had the nerve to say of her staff that: "I do think that everyone was trying to operate within the Act."

And the content of emails that are said to have been deleted is deadly serious -- a request for records related to northern B.C.'s Highway of Tears, where 18 women and girls have been murdered or disappeared since 1969.

I know a family member of one of the missing women, and have heard of the anguish of other family and friends of those murdered and disappeared.

Every effort should be used to find those responsible and bring them to justice -- not to apparently cover the tracks of the BC Liberal government's lack of sufficient action on this critical issue.

Denham's report makes for truly disturbing reading. And so enter David Loukidelis to straighten out the government with his own report on Denham's recommendations.

That would be the same Loukidelis who went from being FOI commissioner to deputy attorney general in 2010 -- from the guy responsible for ensuring the BC Liberal government followed the rules, to the public official ultimately responsible for FOI requests made in the BC Legislature Raid corruption case by the defence for former ministerial assistants Dave Basi and Bob Virk.

And the same Loukidelis who, along with then-deputy minister Graham Whitmarsh, engineered a waiver of the repayment to government of Basi and Virk's $6-million legal fees, despite the surprise guilty plea that ended their trial after just two of an expected 42 witnesses testified. B.C.'s auditor general found "no political interference" in the indemnity waiver.

Loukidelis knows the FOI law and its requirements on compliance very well -- one hopes he will demand this government that has repeatedly violated the rules finally change its ways.

'Ignorance of the law is no excuse!'

Government records do not belong to the political party in power or individual staff. They belong to the public who pays the bills, and accountability is essential for confidence in our democracy.

Deleting emails, destroying documents and blocking access to information is not only breaking the law -- it is potentially obstructing evidence of other illegal activities.

In the federal government, such actions by an employee could lead to up to a two-year jail sentence and a $10,000 fine.

The federal Privacy Commissioner's guidebook on complying with Access to Information Act requests is extremely clear, and written in boldface, large type:

"You could go to jail for the destruction, alteration or falsification of any record with the intent to deny a right of access to that record!!! Ignorance of the law is no excuse!" it states with great emphasis.

Unfortunately, here in B.C. it appears that similar actions do not result in any punishment -- they are undertaken in cabinet minister and the premier's offices by senior officials and excused by the premier herself.

It's time to exorcise the ghost government and return public records to those they truly belong to -- the people.