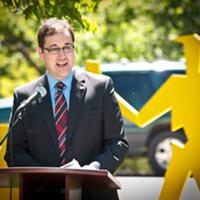 I guess you and your kind must be pretty worried since the election. The Liberals pulled in an unexpected majority government with Justin Trudeau's "sunny ways" campaign. That's not how you spin doctors make your living. You're all about subterfuge and smear, addition by subtraction, and lowest-common-denominator wedge issues. What are you political sleaze merchants going to do for a living now that we've entered a new era of positive politics?

I dunno. Birthday parties? For a few bucks I can tell the birthday girl that Penelope's lame present of Barbie dollhouse furniture shows a shocking lack of insight into her personal aspirations, whereas yours demonstrates a nuanced understanding of her love of Frozen karaoke. Might be a few bucks in that. On the other hand, I've always wanted to work with animals. Perhaps I can find some way to make dogs and goldfish feel insecure and suspicious. I'll get by somehow.

Hey, I'm not the only one on a downer this week. Political junkies are experiencing that empty feeling that comes from staring at the chocolate-and-cream-streaked bottom of an empty Haagen-Dazs bucket ingested in a gluttonous frenzy. No more campaign means serious withdrawal for hard-core politicos. They've taken to watching Survivor again, or shows they PVR'd two weeks ago -- the ones full of ads about how voting Liberal would lead to homelessness and Sharia law.

At times like this all I can say is, God bless America. Binging on Ben Carson soundbites and Benghazi hearings -- oh yeah. That's the good stuff.

But back to your query, GR. What are spin doctors and political schemers like me going to for a living in this bright new era? Well, to quote a former Canadian prime minister, I don't accept the premise of your question.

Is negative campaigning dead? Is positivity the key to political office? Perhaps you should ask Premier Adrian Dix. Is he the B.C. premier whose people have been busy triple-deleting emails? Is he the inspiring leader whose cabinet members have scrupulously avoided any written record of their discussions, a technique more commonly associated with underworld types like John Gotti and his capos?

Is that Adrian "I Ran a Positive Campaign" Dix? Or did someone else win that B.C. election by going all nasty and negative? No GR, I don't think my day is done. Nor do I think the federal election just completed was a clear win for the forces of light.

The idea that Justin Trudeau rode into office on beams of sunshine isn't entirely off base. I agree with those who say Trudeau was the true inheritor of the Jack Layton mantle. "Love is better than anger," Layton wrote. "Hope is better than fear." He didn't add, "Balanced budget promises will sell you to centrist swing voters," and neither did Justin. Trudeau's upbeat campaign seemed like a sincere reflection of the man. We spin doctors hate that -- it's like diners who bring their own wine to a restaurant. A tip of the cap to him, though. He made it work.

But every campaign is unique. This one featured an unprecedented three-way balance of forces with two opposition parties battling for the banner of Harper-slayer. Which hero would falter, leaving a clear field for the other?

As we know now it was Tom Mulcair who stumbled. What was his fatal mistake? When the niqab debate erupted in Quebec, he took a principled position supporting a woman's right to wear whatever she freely chooses. It was in fact the same position held by Justin Trudeau. They took the same stance -- and it clobbered the NDP leader while bouncing off Trudeau like a Nerf ball. The difference was that Mulcair's base was in anti-niqab Quebec while Trudeau's wasn't. And yet pro-niqab Trudeau still ended up with a Quebec breakthrough, probably because anti-Harper voters saw a wounded Mulcair and fled to the Liberals.

Two leaders, same position, same province, dramatically different results. Do all the post-election analysis you want, but I think the real lesson of Election 2015 was that some political developments are no more predictable than the death toll of a monster hurricane.

The election certainly didn't prove negative campaigning is over. The Conservatives and the Bloc Qu&eacuteb&eacutecois drove the NDP into the ground with some truly ugly tactics. The fact that karma came back to bite Harper in the ass doesn't change the fact that the campaign turned on a full-frontal assault of fear and xenophobia.

This is all sweet news for me and my ilk. Trudeau has won the day but the heirs of Machiavelli are not defeated. When the cares of office have turned sweet Justin into the picture of Dorian Gray, we will still be riding our Swift Boats into the fray.

In the meantime, I'm available for hire. I can make balloon animals, do magic tricks, and spread nasty rumours that Tommy peeked over his blindfold during Pin the Tail on the Donkey. Call me.