At our Remembrance Day ceremony in Lions Bay, we heard a great deal about sacrifices made in two world wars for democracy and freedom -- a pretty constant theme, I dare say, right across the country. 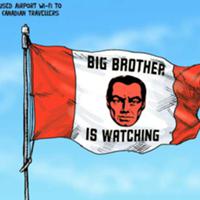 This troubles me greatly. Those who died for Canadian democracy -- indeed all those who served -- must be bitterly disappointed at the legacy they see.

What triggered this thought was when Finance Minister Joe Oliver didn't give his pre-budget speech to the House of Commons but to a group of political supporters in a private lunch and then on New York television. The Commons, with the basic obligation to approve the budget or not, was ignored as if it was irrelevant to the process -- which, as I will show, it is.

Then, my mind went back to Prime Minister Stephen Harper proroguing Parliament to avoid a non-confidence motion.

I started to think about the prime minister having been found in contempt of Parliament.

My thoughts moved to just how the House of Commons, the repository of our democracy, actually works.

I thought of the committees of the House of Commons, which descended from a similar process at Westminster, designed to hold the government accountable. They are intended to hold hearings to test ministers' policies and be critical of legislation that troubles the members. Instead, they are appointed by the prime minister and anytime he gets a sniff of criticism coming from a committee, he changes the chairperson or members of that committee accordingly.

Then I went back to a favourite theme of mine -- a favourite because it is so vital. Members of Parliament have absolutely no power whatsoever.

In theory, of course, MPs can topple the prime minister and his cabinet. This has happened once, when there was a majority government, back in 1873 during the Pacific Scandal when Parliament voted no confidence in Sir John A. Macdonald. This, it must be noted, was before there was the ironclad party discipline that prevails today.

Without members of Parliament having a real and constant power, how can there be democracy?

If there is no one to hold the prime minister to account, how is there democracy?

While MPs do have theoretical power, in reality the prime minister personally is in charge of everything including the appointment of cabinet, all junior positions, even deciding which MP sits on which parliamentary committee and which good little boys and girls go to that useless conference on a tropic isle during the Ottawa winter. He takes his advice, if he takes any at all, not from elected members of Parliament, but from unelected party hacks.

Where, then, is that democracy that our brave soldiers fought and died for?

It's not hard to see how we got into our present difficulties. Because, in theory, the government (being the prime minister and cabinet which he hires and fires) depends upon the consent of the Commons to rule, it became obligatory for survival that the PM control it. Why take chances? (He could, of course, rule by consultation and consensus but prime ministers, with majorities, see no need to go to all that bother.)

Absolute power is achieved by a PM by a combination of the carrot and the stick.

One carrot is the power to promote.

As Napoleon once said, "every foot soldier has a Marshall's baton in his knapsack." So it is with government backbenchers for whom the all-consuming thought is that they, like that foot soldier, could replace any of the cabinet and probably, for that matter, the prime minister.

If backbenchers behave properly, perhaps they'll get on a committee that travels to neat places; perhaps they'll be chair or vice chair of a committee and make more money for doing what they're told; maybe it'll be a parliamentary secretaryship, with increased money and prestige; or maybe a deputy whip or even the whip himself -- again more money; perhaps, just perhaps, they'll make the next cabinet shuffle, with big bucks, car and driver, first class travel and all the trimmings. Maybe, if they behave themselves, and are loyal foot soldiers, good things will happen. What's certain is that if they're not, they won't.

The PM's stick is a lethal weapon. He can turf an MP out of caucus, meaning he'll be expelled from the party and lose its support in the next election. They all know how difficult it is to be elected as an Independent. Moreover, the PM has the statutory power to refuse any nominee the right to run for the party, even though his constituency organization is 100 per cent behind him.

This combination of the stick and the carrot renders the prime minister all powerful and the MPs into eunuchs.

I recommend a book Irresponsible Government by Brent Rathgeber, MP, Edmonton-St. Albert, elected as a Tory in 2008 and re-elected in 2011, who left the Conservatives to sit as an Independent. It's a horror story if you think government backbenchers have a soup&ccedilon of power. Rathgeber relates how they all have their Commons speeches written for them by the Prime Minister's office as well as powder puff questions to put to ministers in question period, both of which they are expected to give verbatim -- no personal thoughts, now!

The PMO always prepares comfy (for the PM) agendas for committees and even obligatory speeches and press releases for MPs to use in their constituencies.

Rathgeber emphasizes the point that Tory MPs consider themselves as part of the government (which they are not), and that being a government cheerleader transcends any obligation to constituency or constituents.

It's a hell of a read and will lay to rest all notions you were taught, and badly want to believe, about "responsible government."

(I wait with patience but I fear in vain for a point-by-point response from my Tory MP or any other for that matter.)

Sadly, MPs, in order to justify their well-paid, phony existence, pretend they really do have influence and truly are an essential part of running the nation.

My MP, Tory John Weston, peddles this rubbish while his record shows a 100 per cent pandering to every government decision no matter what it is. In reality, he's reduced to handing out cheques to municipalities and organizations that would get them anyway, and making PMO approved speeches to chambers of commerce.

For example, in my constituency, a major issue is a proposed LNG plant in Squamish. Weston supports this plant unconditionally even though the majority oppose it. Obviously on instructions from above, he arm wrestled the West Vancouver Council into changing their opposition to this facility. There was a hell of a public reaction, and with a municipal election imminent, Council promptly reversed itself and is once more opposing the plant!

Weston's plight is repeated right across the country with government backbenchers who all understand the advice of the late U.S. House Speaker Sam Rayburn that "to get along, one must go along."

Stephen Harper has become dictatorial in the extreme because he can be. He has contempt for the House of Commons because he doesn't have to have respect for it. He runs parliament just as a tinpot dictator runs his legislature.

The entire system has become a land of "make believe."

We should be able to look up to and respect our members of Parliament as people with power and dignity who represent our interests at the seat of power. Of course they don't and haven't the guts and sense of honour to do a damned thing about it. What, lose that MP designation, all that money, and possible promotion to cabinet?

You must be mad!

How can we be true to all those valiant men and women who put themselves in harm's way and too often died for us, if we permit this fa&ccedilade of the democracy they held so high to continue?

We mouth the right words on Remembrance Day, but in truth, we repay sacrifice, sometimes the supreme sacrifice, with hypocrisy.

We, who owe so much to these brave people we rightly honour every November 11, ought to be ashamed of ourselves.

Forgive me for making a short reference to my last column on the fall of communism and the severe limits to the apparent victor capitalism. A flurry of comments held that I should've done something about this when I was in political office.

Of course I should have, and I fully intended to.

Unfortunately, I ran into some bad luck.