This spring I began a months-long journalistic quest to answer the big question of my millennial generation: Are we screwed? It's hard not to suspect so. Ecological neglect and inequality are pushing human civilization ever closer to "irreversible collapse," warned a NASA-funded study not long ago. And scientists now fear a huge disintegrating Antarctic ice sheet may raise sea levels by at least 10 feet. So is it completely naïve to think the screws on our future can somehow be untightened? 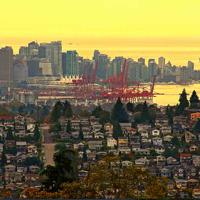 What's Your Version of Vancouver as 'Greenest City'?

The Tyee's 'Are We Screwed' series reporter Geoff Dembicki speaks at a free, audience interactive panel discussion tomorrow pursuing the question: "World's greenest city? Vancouver will be that for me when..." More info about this Spur Vancouver event, moderated by Tyee editor David Beers, is here.

My short answer is 'no'. It's not naïve. There's hope yet for our embattled human species. But it's emerging in unexpected ways and from unexpected places. I say this after spending the last two months in Vancouver and New York reporting on world leaders, futurists, ethical investors, finance executives, multinational CEOs, clean energy analysts, climate activists, green designers, sustainability icons and venture capitalists. Their resounding consensus: We're not yet totally screwed.

The issue is by no means settled. My point is simply that influential people across a spectrum of social, financial and political interests broadly agree the three trends I describe below are changing how we live, do business and relate to Mother Earth. My reporting quest continues through the summer. But in the meantime, tell me what you think. Are we screwed? Post your questions and remarks in the comment section below, or email me directly, and I'll respond to them in a follow-up story.

1. Our global shift to sustainability is well underway.

You hear it all the time. Some brainiac figures out how to fix the world's problems, and then laments, 'If only the political will existed, we could truly begin our shift to a more sustainable society.' The day we set aside our political differences and really get down to the gritty work of solving stuff like climate change will never come. Our global shift to a cleaner future will instead be messy, divisive, poorly understood and above all else, human. How do I know that? Because it's already happening.

Yes, Stephen Harper talks of nothing but pipelines, China builds ever more coal plants and Republicans deny the climate is warming. And still, nearly 10 per cent of the planet's energy now comes from renewables like wind and solar. Over $1.5 trillion has been invested in them. "This should earn [clean energy] the right to not be called 'alternative' anymore," Bloomberg New Energy Finance's Ethan Zindler told me. Sustainability is a driver of the global economy, and it's accelerating.

As much as we'd like to think that people and companies choose to save the planet because, well, it's the right thing to do, the reality is no solution can truly succeed unless it comes with an airtight business case. What's exciting about our present moment is that never have the economics of sustainability been so compelling. Hawaii is on track to meet ambitous clean energy goals because solar power there is cheaper than fossil fuels. In six years, that could be the case in most of North America.

Which recently led former New York mayor Michael Bloomberg to conclude that fixing the environment is not about "altruism," but "common sense." Polluters are now painfully aware of this shift. A surge of cheap renewables in Europe has cost the continent's top 20 utilities half a trillion euros. On this side of the Atlantic, a wave of new broker research predicts we might not be far from the day when global oil demand peaks, and industries like Alberta's oil sands go into terminal decline.

3. Millennials get it, even if older generations don't.

So why don't we read about this shift every day in the mainstream news? Why do our politicians insist on framing sustainability as a choice between the economy and the environment? How come so many corporations refuse to embrace the change that's all but inevitable? Because the elite institutions of our society are by-and-large run by people who came of age during earlier generations. In most cases the ideas that got them into positions of power now prevent them from seeing the future.

On this I defer to Jim Rogers, a former CEO of coal power heavyweight Duke Energy. If Rogers could reenter the industry as a 25-year-old millennial, he'd be an "attacker", he said, of the fossil incumbents whose instinct is to hope "all these new [cleaner] technologies go away." Anyone born after 1982 came of age in a culture of ecological threats, scarcity and recession. Us millennials know better than anyone why sustainability must prevail -- and as we take control of society it just might.

That's my take (so far). And I said earlier, this is really an invitation to you to send me your point of view. Is the future for we millennials totally screwed – why or why not? Email me so I can include your perspective in an upcoming piece on The Tyee.