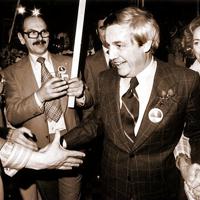 The media seems stunned: why would the premier, who in 2012 beat the odds and won a majority government, only serve half her term?

But personal vanities and the difficult political chore of running a petro state ruled by one party for 43 years simply got to be too much.

And so the lawyer, ever fond of pearls and expensive air travel, departed from the petroleum honeypot of Alberta as unceremoniously as her predecessor, Ed Stelmach.

Her exit leaves a province that has over-invested in a carbon-rich resource, in a globally shrinking world, in deep trouble.

Dipping into the honeypot

For starters, Alberta is a petrostate that gets 30 per cent of its revenue from the extraction of hydrocarbons largely dominated by foreign companies.

Petrostates operate with all the finesse of Soviet republics, where you do what you're told if you want a piece of the honeypot.

American political scientist Terry Lynn Karl, an expert on the politics of oil, once noted that "petroleum dependence turns oil states into 'honey pots' -- ones to be raided by all actors, foreign and domestic, regardless of the long-term consequences produced by this collective rent seeking."

People come to Alberta to make a killing in the oil fields, not a living. And that sense of entitlement pervades the province.

Redford's downfall was, in part, related to this entitlement. She regularly dipped into the honeypot to court rich pipeline supporters in the U.S., and then mourned the death of Nelson Mandela with an extravagant $45,000 public bill. Albertans were offended.

Redford also had no interest in confronting the perils of her petrostate: her job was to carry on with business as usual. She not only ignored democratic and taxation deficits, but the climate deficit as well.

The curse of oil

Petrostates, whether small or big, right or left, democratic or authoritarian, all behave badly to different degrees. And Alberta, just like Texas or Saudi Arabia, has often proven a self-serving plantation for the extraction of fossil fuels with temporary foreign workers for the benefit of a few.

Thanks to the curse of oil, they can't diversify their economies or balance their budgets. They rack up poor social welfare scores and widen inequality. They appear large and powerful, but as Redford's departure illustrates, are truly hollowed out shells. Last but not least, they cultivate devastating environmental damage.

To political scientists Karl, the poisonous influence of oil revenue undermines everything. Petrostates are less accountable to their citizens and taxpayers "precisely because they are relieved of the burden of having to tax their own subjects," she says.

Every day, politicians and industry proudly remind Albertans how oil pays for the province's roads, schools and hospitals. Albertans are truly subjects.

Redford showed no interest in tackling this issue. She wouldn't even entertain discussion about a sales tax, let alone a representative broad-based tax system that would force the province to humbly run on revenue from ordinary people.

"We're not introducing a provincial sales tax, period," she declared in 2013.

But the severing of the bond between taxation and representation remains the Achilles' heel for every petrostate.

Karl explains the affliction: "Because petro-dollars are not 'their' money, citizens are not motivated to ensure that state revenues are well spent; they are not engaged; and they seldom demand better monitoring of the utilization of revenues," she wrote in 2006.

"Like their rulers, they too often become addicted to their share of oil rents even as a type of permanent disconnect between the state and its subjects sets in."

Louisiana and Texas, homes to extreme politics and rampant oil corruption, can't balance their budgets either. It never occurs to a petrostate that multinationals should pay for booms instead of citizens.

Petrostates also represent a tense marriage of convenience between oil companies and rulers "based on extreme over-centralization and concentration of power -- with little incentive on either side to change the system," says Karl.

Redford only cemented this union. For example, she appointed Gerard Protti, a known energy lobbyist and founder of the Canadian Association of Petroleum Producers, as chief of Alberta's new energy regulator.

As the Tyee has reported, only one country has escaped the oil curse, and it is Norway. Karl explains why.

Unlike Alberta, Norway held a broad debate over the appropriate use of oil revenues. It reorganized its bureaucracy and strengthened environmental protection. It created the highly-efficient Statoil, and defined explicit roles for public and private companies. It sustained a diversified economy, reined in borrowing, and established an oil fund invested abroad worth $900 billion.

"It even protected the state's non-oil fiscal capacity by resisting the strong temptation to lower taxes and permit oil revenues to replace its normal revenue base," explains Karl. "By bringing its oil fortune under strict control, it was able to ward off the insidious rent seeking that followed in the wake of oil discoveries elsewhere."

Peter Lougheed originally put Alberta on a Scandanavian path, but oil interests and the indifference of a lazy citizenry let it go.

Lougheed advised Albertans to behave like an owner, collect their fair share, save for the rainy day, go slow, add value and govern wisely. This remains a radical agenda for an ailing province.

But don't expect the next leader of Alberta, or the Wildrose Party, to champion it.