I suspect few writers have better articulated the existential quandary created by our ailing planet than French philosopher Bruno Latour. In a lecture several years ago he described our current age as one when collective human action threatens to end planetary civilization for good -- and yet no single person can be held accountable. Nor can any person's actions alone create a better outcome. The result, Latour argued, is we now feel "guilty about having committed crimes for which we feel no responsibility." 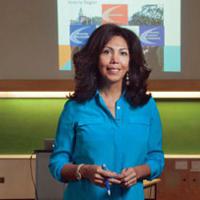 The problem Latour identified is a function of scale. Enmeshed in our local lives, it's impossible to truly see the global picture. But what if we conceived of people the way science conceives of data: as belonging to vast networks of meaning? Our knowledge of global warming is after all assembled from weather stations, ice cores, tree rings and billions of other local data sources. "Can this lesson of assembly be followed," Latour wondered, to create vast networks of people whose combined actions address "Earth's changing state"?

It turns out Latour's vision is shared in Silicon Valley. The Bay Area's latest generation of tech firms -- including travel rental provider Airbnb, ride-share app Lyft and small job outsourcer Task Rabbit -- sell access to networks rather than ownership of goods. In the fast emergence of a "sharing economy," where people make goods or services temporarily available to others, tech thinkers sense a profound shift in how we relate to each other and the world around us. Could it also change how we understand and respond to global ecological crises? And in the process, transform human identity?

Earlier this month, as part of an ongoing reporting project on new and emerging solutions to climate change, I traveled to San Francisco to find out if the sharing economy being driven by Millennials is just North America's latest corporate fad -- or whether there's something truly meaningful happening beneath the hype.

My interest in the sharing economy was first piqued by Canadian-born Nicholas Parker. In 2002, he pioneered the concept of "cleantech" (short for clean technology), an industry now worth $170 billion. So I paid close attention when Parker addressed a late January green business forum in Vancouver. In his opinion a societal desire by Millennials for thrift, design, community and sustainability is disrupting accepted wisdom about how to heal our ailing planet. "We're seeing a very exciting shift," he said.

As one of those Millennials my head was spinning. Like many of my peers, I'm far less interested in owning a car or house than my parents' generation; I yearn for the acceptance of creative communities even though I was told to feel unique my whole life; and I worry deeply about the uncertain environmental and economic future I'll someday inherit. But I'm unsure how to make it better. After hearing Parker speak of an "exciting shift" in part caused by people like me, I needed to learn more.

My arrival to California coincided with the state's worst ever drought. Dust clouds spread deadly fever across the interior. Yet in the cozy Airbnb I'd rented in San Francisco's working-class south, only a small bathroom Post-it note hinted at crisis: "Every drop counts." My first morning I went to meet Joey Marquart in a French café on the edge of Chinatown. He arrived 10 minutes late, blaming the ride-share app Lyft. "The driver was new," he apologized with a laugh. "So we got a little lost."

As cleantech vice-president for Edelman, a global public relations firm, Marquart identifies emerging trends in sustainability. These days he's watching the sharing economy closely. "This concept of sharing and not necessarily owning something is powerful," he said. "It has incredible ramifications." An example: by patronizing Airbnb instead of a hotel, you require far less power and water, he said. "It's using technology to consume things differently." I recalled that Post-it note: "Every drop counts."

But after saying our goodbyes I wondered how anyone could calculate the power and water I'd saved by forgoing a hotel. Same for the green benefits of car-shares like Zipcar. One widely touted 2010 study found each car-sharing vehicle in North America takes, on average, about 15 personal vehicles off the road. The estimate is highly dependent, though, on city density and household driving patterns, leading some to accuse Zipcar and others of "greenwashing," and argue that "these environmental claims can't just be taken at face value."

As I walked amid the office buildings of San Francisco's financial district, I tried to make sense of an emotion stirred by something deeper than reducing cars or power usage. I felt a sense of possibility about the future even if I couldn't quite figure out why. On the fifth floor of the district's art deco Hearst Tower, Ted Howard suggested I'm not alone. "This whole sharing economy," he said, "is definitely a mentality that's coming up with the current generation more than older generations."

Howard helps lead the San Francisco branch of Agrion, a global network of business leaders creating a greener economy. What gets him particularly excited these days are microgrids, a technology that allows people to generate their own renewable energy (from rooftop solar panels, for instance); share it with their neighbours; and live in communities more resistant to power outages and extreme weather. In such a system, he said, "you really can help yourself as well as helping others."

It's still very much a nascent vision. Many power utilities are wary about giving up the centralized control -- not to mention profits -- they've enjoyed for a century. But California just passed laws making local energy projects easier. Crowdfunding sites like Mosaic help provide funding. And Howard believes societal pressure only keeps growing. "The income gap is the biggest it's been in decades," he said. "There's lots of alienation. People feel a mental and physical need to connect with others."

While Howard sees in the sharing economy idealistic solutions to an economic system that alienates people from their environment and each other, others fear it could actually make alienation worse. In this "brave new world" where people compete to give rides, rent out spare rooms and crowdfund, say, solar panels on their roof, "you won't have: a regular salary, paid vacations, employer-provided health insurance, or a chance of getting rich," writes Harvard lecturer Steven Strauss.

As my flight took off from San Francisco I tried to comprehend an economic shift defined as much these days by local clean energy and community gardens as the corporate strategy of Walmart, BMW and Home Depot. Below me the city's lights receded into darkness, and I wondered whether Millennials like myself were creating a vast new network committed and able to heal our ailing planet, or buying into a system designed merely to enrich the next generation of corporate CEOs.

Back in Vancouver I went to a forum at the Hive with people mostly convinced of the former. "The vibe in here is just electric," declared April Rinne of the San Francisco-based Collaborative Lab, who is among the sharing economy's most outspoken advocates. In its rise she sees new tools to allay societal isolation, and regain control of a future dictated by governments and corporations. "We are seeing a shift," she said, "from centralized institutions to decentralized networks of individuals."

This shift in her opinion will allow us to radically reduce waste, build more caring businesses and create stronger communities. "If you care about sustainability," she said, "you absolutely want to support the [sharing] economy." Biking home under a starlit sky I thought again of the philosopher Latour. Still unsure where this new paradigm would ultimately take us, I nonetheless felt less guilty about my role in creating global ecological crises, and alienated from their potential solutions.

I allowed myself to feel the slightest bit hopeful for the future.