CONTEST: Win one of 10 passes to Living the New Economy (Vancouver Island).

WIN A PASS TO 'LIVING THE NEW ECONOMY'

Presented by Vancity, Living the New Economy (Vancouver Island) is a week-long festival of ideas and opportunities where you'll mingle with hundreds of other trailblazers and thought leaders.

What you'll find: 20 sessions with 65 different speakers, panelists and mentors.

Enter before Sunday, Nov. 17 to win your pass. 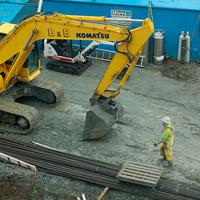 New economic models aren't actually so new, of course. Over the years we've seen varied utopian economic visions put forth by Marxists, anarchists' "participatory economics" models, "natural capitalists" like Paul Hawken, not to mention socialist feminists, like Marilyn Waring and her book Counting for Nothing decades before.

But an upcoming series of events in Victoria, following a similar event last month in Vancouver, hopes to shed light on what's already changing here in British Columbia, and how much more could benefit from transformation.

Now in its second year, Living the New Economy is designed to "energize, accelerate and celebrate the people, institutions and collaborations that are bringing a new economic movement to life." This year's series runs from Nov. 29 to Dec. 5.

One example of innovation and entrepreneurial creativity is Salt Spring Island's Drew Rokeby-Thomas, who invented a helix-shaped electricity turbine that generates energy from wind or water. He'll be showcasing his 18-foot device at Living the New Economy's opportunity fair.

Another is a deeper look at the "incubation stage" of Victoria's food hub, which aims to fill the gaps in sustainably feeding the region.

"So many people and organizations are really struggling with how to resource themselves," Moen said. "I wanted to learn more and get an education about financial literacy, to increase my own vocabulary and understanding of how the financial world works and how it doesn't. If it's not working, what can we move towards? How can we help shift things into what we actually want and what works for us?"

Those are questions the events at Living the New Economy try to answer, she said.

Having a say in our economic future

Carol Anne Hilton, CEO of the organization Transformation: Social and Economic Development, will speak at Victoria's Living the New Economy this year. The Nuu-chah-nulth indigenous economist studies ways of incorporating an aboriginal worldview into "new approaches for sustainable, inclusive development," according to her website.

She will join a panel on this field -- what she terms "Indigenomics" -- alongside Ana María Peredo, professor of Sustainable Entrepreneurship and International Business at the University of Victoria's Peter B. Gustavson School of Business.

Peredo said her research on a number of Latin American indigenous communities who are building their own economic development models has much to offer First Nations here as well as other communities. A more communal understanding of the land and resources is one key ingredient of such an approach, as well as mobilizing earnings for the widest benefit to the community, she said.

Peredo has spent years studying rural community-based enterprises in South America's Andes mountains. In one instance, an indigenous village turned its town square over to a small-scale regional trading market every week. Others have explored mixing economic development with their communal traditions of governance and ownership.

Also featured is a session on economics as viewed through the principles of permaculture with renowned writer Ethan Roland of New York-based AppleSeed Permaculture. "Permanomics," as Roland calls it, asks "What if our financial system looked more like an ecosystem?" and takes into account not only the money value of things, but also other factors such as intelligence, experience, culture or spirituality.

AppleSeed encourages people and organizations to "mimic nature's practices of investing: locally, intimately, diversely, and primarily in living capital," according to its website.

"We think our region is so primed for this accelerating economic movement that we see all over the world," said Living the New Economy co-organizer Geoff Gosson. "We're talking about new economic types of enterprises, projects and organizations and people working so hard to address some of our most critical challenges around the economy, environment and specifically climate change."

Gosson cited recent mass movements such as the Arab Spring, Occupy Wall Street and Idle No More as examples of a growing desire for communities to have more control over global issues that affect them.

"People are realizing they can have a say in their future, and together be an incredibly powerful force for change," he said. "That's part of why there's this global movement to repatriate our economy, to have a democratic say in how money is spent and where."

Organizers of Living the New Economy hesitate to describe the more-than-20 events as a "conference" since it will be short on "talking heads", Moen said.

The events also bring together like-minded people to discuss how to get projects off the ground.

"Living the New Economy events help people come together to share resources and understand they're not alone in the journey towards a new economy. The need for community is a core human need; that's a common theme throughout," Moen said.

Also featured are workshops on alternative fundraising models, "marketing with integrity," "raising local forms of capital," and "community resilience through new forms of ownership." There is also an opportunity fair showcasing dozens of conversation-starting innovations and ideas. Gosson said the events bring together a "wide spectrum" of approaches that transcend political divides.

"You have very cooperative, socialistic kinds of things on one end -- worker co-ops and so on -- and on the other end, very capitalistic, profit-oriented enterprises that are also incorporating social and environmental impacts," he explained. "What links them is the reorienting to the values in our communities." Values could include a healthy environment, communal spaces, food security or even just knowing the neighbours.

"It's about blending our values with innovative business ideas, and influencing old ideas with new values," he said.