[Editor's note: Back in early 2012, in her analytical submission to the National Energy Board, independent economist Robyn Allan characterized the Northern Gateway pipeline proposal as a "serious threat" to Canada's economic growth and long-term development. Since then she's closely tracked the political struggle over Gateway, taking apart revenue claims and calling out dubious pipeline economics. Today, Allan takes a closer look at the B.C. government's first "condition" for Gateway to meet its approval. Expect analysis of the other four in coming weeks.]

More than a year ago, in response to growing political heat over the Enbridge Northern Gateway pipeline proposal, Christy Clark's government released five requirements oil pipeline projects must fulfill for British Columbia to consider supporting them. 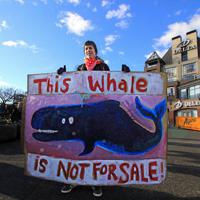 BC Gov't to Enbridge: 'Trust Me' Is Not Good Enough

The focus was on oil pipeline companies and holding them accountable for their environmental impact, spill preparedness and response, consultations with First Nations and ensuring a fair share of business benefits made their way into the provincial treasury. Details of the five requirements are contained in a technical report aptly titled Requirements for British Columbia to Consider Support for Heavy Oil Pipelines.

The five conditions have figured prominently in discussions concerning oil sands transportation issues, the extensive environmental risk posed by diluted bitumen, and the potential for an erosion of B.C.'s economic prosperity as the province becomes a tanker terminal for Alberta. British Columbians are regularly assured that unless these five conditions are fulfilled, no heavy oil pipelines will be built.

The first condition requires "the successful completion of the environmental review process. In the case of Enbridge, that would mean a recommendation by the National Energy Board Joint Review Panel (JRP) that the project proceed."

What has not been made clear about this particular hurdle is that the right to decide whether the Northern Gateway environmental assessment process is satisfactory for B.C. has been handed over to the National Energy Board when it should be -- and could be -- B.C.'s sovereign right to decide.

The government's position paper makes no mention of the fact that B.C. would have had the right to determine the adequacy of the process if it had not signed an Equivalency Agreement in 2010 promising to accept the National Energy Board's decision.

One month to reclaim BC's right

The province was very clear in closing arguments to the National Energy Board Joint Review Panel in May 2013 that B.C. could not recommend approval of the project because Enbridge failed to show it met environmental requirements embedded in the province's conditions.

The province was adamant the panel not approve Northern Gateway, not only because Enbridge cannot be trusted -- "'trust me' is not good enough" -- but also because the environmental risk of the project to our lands and waterways, under any operator, is too great.

The text of the closing argument makes clear the province does not want to expose us to the environmental spill risk Northern Gateway represents:

"NG's (Northern Gateway's) plans for terrestrial and marine spill response remain preliminary, and that it cannot, today, provide assurance that it will be able to respond effectively to all spills. Given the absence of a credible assurance in this regard, the Province cannot support the approval of, or a positive recommendation from the JRP regarding, this project as it was presented to the JRP."

The B.C. government does not believe the environmental process is complete because it could not recommend to the JRP that the project proceed, and yet the Clark government is leaving the decision -- the ability for Enbridge to easily leap over condition #1 -- in the hands of the National Energy Board. This makes little sense if the province is serious about its position.

With the JRP's report expected by mid to late December, B.C. has little over a month to cancel the Equivalency Agreement because there is a 30-day notice clause -- and the 30 days must come before the release of the report. B.C.'s position was given under oath at the hearings. Time is running out to efficiently and effectively protect it.