I confess at the outset that I have a personal interest in this -- but so do you, for it affects a part of our province that ought to have had worldwide and local classification as a wildlife preserve long ago. 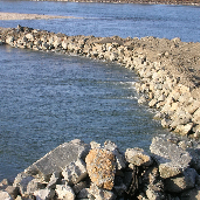 Salmon Kills and the Politics of Mining the Fraser

Burnco Rock Products proposes to build a large scale gravel mine at McNab Creek at the northern end of Howe Sound. It will be 77 hectares, include an onsite crushing and processing plant, and will produce a minimum of one million tonnes per year for 20 years. The plant will run 24 hours a day, every day of the year. It will employ 12 full-time and will, as is the habit, be built by the company's own crews from outside B.C.

What is Burnco? A very large private company out of Calgary that is more than a century old.

One thing for which Burnco is famed is its generosity to political pals. According to Integrity BC, "They were especially good to the BC Liberal Party. Calgary-based Burnco Rock Products Ltd. donated $50,700 to the Liberals last year, bringing their running total to a cool $180,700. For reasons known only to themselves, they couldn't find at least $250 for any other party in B.C."

Of course we're not talking about a huge pipeline or the tar sands here. And all that's involved is the southern-most fjord in North America, one of the truly beautiful spots of the world which, if we care anything at all for our outdoors, must be preserved.

The fjord through adult eyes

On June 30, I took part in an amazing demonstration. About 150 private boats and innumerable canoes, kayaks, inflatables, putt putts and small sailboats, plus Bill McEachnie's large 'La Feline' (used as the host ship for music and speeches), sailed to and paraded past McNab Creek.

We all sailed by this lovely creek set deep in the mountains that border our glorious fjord and, I believe, collectively gasped at the notion that any government would permit the calamity of a gravel pit here. I was born in and have lived in Vancouver most of my life, and spent a great deal of time as a boy on Howe Sound. Quite frankly, I never stopped to take in this majestic beauty. I sat on the deck of Rod and Gail Macdonald's power boat, "Paesano," and it was if I was looking at something I'd never really seen before. Like people, I suppose, who live in Lucerne, Switzerland, and don't notice what tourists spend millions of dollars to visit.

A gravel pit? For huge private profit we make McNab creek into a gravel pit?!

McNab Creek is, as I mentioned, a spawning river for Pacific salmon. One of those salmon is the cutthroat which, because it's not fished commercially, has not been studied. But they are a critical part of the ecology of this lovely stream. There are both resident and sea-run "cutts" and can't be abandoned just because we don't kill them and can them.

Return power to the municipalities

It was quite an experience sailing past the river mouth. Music and speeches emanated from La Feline, all of which were good, but that of Lions Bay Mayor Brenda Broughton topped the list.

Broughton and other local politicians and First Nations want to "engage in the development of a plan that supports a holistic healthy ecosystem [that] continues to provide a natural community for future generations of families and preserves the pristine wilderness in harmony with nature."

I, of course, agree with that 100 per cent, but I offer this caveat. Municipal governments once had the power to rule on environmental matters, but do no more. That jurisdiction must be returned.

In 2002 the provincial government stopped BC Hydro, our Crown corporation, from developing new sources of so-called "clean green energy." (They grandfathered the Site C dam.) The government arbitrarily decreed that any new production of wind energy, biofuel or hydroelectricity would have to come from the private sector.

The development of the Ashlu River as a power producer was, after many public hearings, turned down by the Squamish-Lillooet Regional District. The provincial government, under Gordon Campbell, forthwith passed legislation taking that power away from local governments -- retroactively.

Any "protection plan" must not only have an environmental protection clause but also permit local governments to protect designated areas and enforce that protection. In short, all of Howe Sound should have the protection Bowen Island has under the Island Trust Act -- for an excellent coverage of this issue I strongly recommend Around The Sound by Doreen Armitage.

Howe Sound is making a miraculous recovery, thanks to small groups. We have orcas and dolphins, herring and coho, otters and eagles. As it once was when I was a child. A riveting sight for me was an osprey sitting on a piling by the creek mouth. He knew something that neither Burnco nor the provincial government care to know -- that there are fish in that river.

A gravel pit for God's sake!

There will be, I suppose, as there always is, a sneer that this flotilla was made up of rich kids playing at protest. Even of that were so, which it isn't, aren't we all British Columbians fighting to preserve our heritage? I was blown away by what I saw. Organized by the Future Of Howe Sound Society and led by the indefatigable Ruth Simons, this was an extraordinary effort. It had to be seen to be believed. It was interesting to note that the local MP, Conservative John Weston, was there and spoke, but the NDP MLA Nicholas Simons was nowhere to be seen.

Do yourselves a favour. Take a cruise or rent your own small craft and see what Howe Sound really looks like. I caught my first shiner and first salmon in Howe Sound as a boy; seeing this beautiful fjord from a different vantage point blew me away. Kids take these things for granted; adults should not.