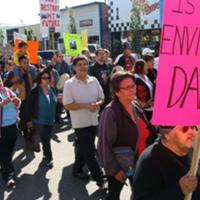 How Enbridge Sawed Off Good Relations with BC First Nations

Vast economic gain with minimal risk sounds wonderful, but when you look deeper, there's quite a different story.

Few jobs for a short time

Even then, Enbridge has indicated PetroChina -- probably using the Temporary Foreign Workers Program which allows imported workers to be paid 15 per cent less than Canadians -- would "love" to build the pipeline.

Your bills will rise

For almost two years Canadians were led to believe the economic benefit from Northern Gateway would arise from higher prices paid in Asia for crude oil shipped along the pipeline. What we weren't told is that these higher prices would be passed onto Canadians. When I filed my critique of Enbridge's benefits case with the National Energy Board Review Panel earlier this year, the company confirmed this is the intent of the project.

Consumers and businesses faced with limited budgets must adjust to higher oil prices. This impacts economic activity in other areas. Spending and investment declines -- downsizing and layoffs result. None of the negative impact of higher oil prices have been built into Enbridge's rosy scenario.

The ads also tell us Enbridge has "World-class safety standards... the pipeline will be monitored 24/7."

On July 25, 2010 in Marshall, Michigan, Enbridge's Line 6B ruptured releasing more than 20,000 barrels of dilbit. Dilbit is a mixture of heavy oil sands crude called bitumen mixed with a toxic diluent which enables it to flow through a pipeline. This is the oil planned for the Northern Gateway pipeline.

In Michigan, as diluent evaporated into the air affecting the local community, remaining bitumen made its way into the Kalamazoo River. Enbridge's corporate standard for identifying a spill is 10 minutes with an additional three minutes for pipeline shutdown. It took more than 17 hours for the Kalamazoo spill to be detected and the pipeline shut down. Line 6B was monitored "24/7."

Pat Daniel, CEO of Enbridge testified before the U.S. House of Representatives in Sept. 2010. He promised "by the end of September we will have completed the bulk of the clean up." It took 23 months and $765 million for the Kalamazoo River to re-open to the public.

The U.S. National Transportation Safety Board has released documents which provide an arms length, independent look at Enbridge's world-class safety standards. They explain operating safety took a back seat to corporate growth.

Led down the path

On June 18, 2012 Enbridge's Athabasca pipeline north of Edmonton leaked 1,500 barrels of crude oil. Northern Gateway will cross more than 700 vulnerable waterways along its route through Northern B.C. It won't take a Kalamazoo spill to compromise B.C.'s watersheds. According to toxicologist reports, a spill upstream in the Kitimat River -- half the size of the one in Alberta -- should do it.

Enbridge hopes to counter B.C.'s growing opposition to Northern Gateway with a slick campaign and a smooth tag line -- "It's more than a pipeline, it's a path to our future."

Some path, some future.