Quebec and British Columbia could well be described as sister provinces. Both siblings are photogenic and outdoorsy, with more than a hint of estrangement from the ROC ("Rest Of Canada"). 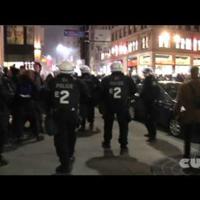 Politically, both provinces feature socially progressive urban centres, routinely mocked by those outside the big cities. Both are governed by unpopular Liberal premiers: Jean Charest, an ex-Tory, and Christy Clark, who has started recruiting federal Conservative staffers at an impressive rate.

Charest and Clark are each caught between a resurgent, traditional social-democratic opposition and an upstart right-of-centre party. With elections looming, both premiers appear to be tacking to the right, trying to squeeze out their business-friendly opponents -- John Cummins in B.C. and François Legault in Quebec.

In Quebec, this shift has crystallized in the decision to hike tuition fees by 75 per cent over the next seven years. At an average of $1,625 per student, the savings for government would be modest, but symbolic.

Backed by roughly half the population, the government has faced down 175,000 striking post-secondary students, refusing to reinstate a tuition freeze. Electorally, the Liberals' tough stance appears to be working. Last week the Quebec Liberal Party squeezed out a first-place finish in a CROP poll conducted for La Presse, leading to speculation that Charest is polishing his campaign buses with little red felt squares.

That ubiquitous red square, by the way, is a play on the phrase "carrément dans le rouge," or "squarely in the red." I've pinned one to my jacket to show my philosophical support for the students, even if I think some groups' tactics are counterproductive. My involvement is not totally abstract: I am one of many young people from B.C. to have been lured away at one time by Quebec's excellent and affordable universities.

These numbers raise two interesting questions. If B.C. and Quebec are otherwise comparable, but Quebec students pay half the tuition (and less for rent) -- why have they been protesting for 12 straight weeks? And if Montreal students can get 200,000 marchers to hit the streets (double Vancouver's estimated Game 7 crowd last year), why can't progressives in B.C. muster anything close?

The answers are likely to be discouraging for anyone hoping for a student-led B.C. "spring" (itself a problematic term). Certain broad strategic lessons do emerge, but first, here's why it won't happen the same way out west.

One could certainly say that Quebecers embody a more robust culture of public protest. Normal middle-class families consider it healthy to take the kids out and hoist placards denouncing things they disagree with. Quebec unions have lent financial and logistical support to the student associations from the beginning. Low tuition fees are a distinct point of "national pride." Quebec progressives recognize a slippery slope when they see one. While the rest of us have been lulled by neoliberal think tanks, Quebecers are awake and pounding the pavement on our behalf. These arguments are all part of the truth.

But like practically every other issue in Quebec, the tuition debate must also be considered through the lens of the National Question.

At the top of this article is a photo of a sign saying "QUEBECERS, ON YOUR FEET!!!" The other side was marked with the words "LA SOUVERAINETÉ! ÇA PRESSE!!! (DEPUIS 1760!!!)" Roughly translated: "Sovereignty, it's urgent, and has been since the Brits conquered Montreal." The woman carrying the sign was also wearing a red felt square on her jacket.

There are signs all over of this blending of nationalist sentiment with support for the student strike. My anglo friend, pointing at one of many Patriotes flags: "What's that, an Irish thing?" No, it's a symbol of armed rebellion against the English. Hence the guy holding a rifle.

It gets uglier. At one protest in March, a group of young people in blackface hauled an effigy of the premier through the streets bearing the name "Sir John James Charest." This is a reference to the book Nègres blancs d'Amérique, published in translation as White Niggers of America. Written in prison by FLQ leader Pierre Vallières, the book calls on French Quebecers to throw off their colonial shackles and unleash revolution.

Were these groups invited to the protests? Do they hold a stake within the various student associations? Probably not. But there they are, padding out the crowd numbers, protesting for a complex blend of reasons.

Like me, Pauline Marois has been sporting the little red square on her lapel -- though I daresay for slightly different reasons. The PQ leader has condemned Charest's tuition hikes and promises to cancel them if she is elected. She can hardly do otherwise. In 1996, Marois was education minister under Premier Lucien Bouchard. Her musings about a fee hike at that time prompted another giant walkout and weeks of demonstrations before she backed down and instituted a tuition freeze.

This time, the protests appeared to play in the PQ's favour. They catalysed a sense of public frustration with the incumbent Liberals: nine years of alleged corruption, arrogance, influence-peddling, gerrymandering, regressive tax hikes, environmental callousness, and sundry other wicked deeds. (Sound familiar, British Columbians?) So the PQ threw its support behind the students. Now it appears that might backfire.

Still, despite the unique situation of the left in Quebec, here's some general tactical advice from the streets of La Belle Province.

Step one: If you're going to protest, don't just abstain from property damage. Prevent it. Sure, we can debate the semantics of "violence." Sure, nobody's been hurt, mostly, except several police officers. Yes, people are angry, although Yoda would have something to say about that. Think of the street like an airplane fuselage: broken windows just suck out all your oxygen. Indignant national columnists are drawn to flames like moths. If you care about step two, stop your friends from picking up rocks. Pull them away from the line of riot shields. That takes infinitely more courage than fighting cops.

Step two is to build coalitions. This is where Quebec students have done well, most notably in the recent Earth Day rally. Subsequent media reports tried to characterize the student movement as having hijacked or co-opted the quarter-million person manif. Rather, all the students did was create a Venn diagram of people who oppose the hikes and people who are concerned about the environment. (The sovereignists, Charest-haters, and federal opposition MPs showed up too.) The overlap between all those groups is considerable, and that's okay.

Occupy was accused early on of not having a single focus. There is strength to be found in broadening the conversation. Making the tent bigger. Speaking to the middle. All these issues are, in fact, related -- Charest made that clear when he joked about sending student protesters to work in the new mines up north.

From sister to sister

Last Friday I followed a feminist demonstration in Quebec City, where marchers made the point that tuition hikes disproportionately affect women. It was a smart angle on a well-worn issue. As protestors marched and chanted behind a purple banner, police boxed them in, wrapped a line of police tape around the whole group, and arrested them one by one for blocking traffic. Each received a $494 ticket.

One older woman was sight-impaired, walking with a white cane. The image of police leading her off to a borrowed city bus provoked a certain cognitive dissonance. It pointed to a larger dysfunction. It led one angry person on Twitter to accuse me of making it up. I thought it made the whole demonstration worthwhile.

As long as Charest is in power, any challenge to his government will be bolstered by those who see him as a federalist imposter. Barring the emergence of a B.C. sovereignty movement, Quebec's crowds will continue to be larger, noisier, and more complicated. But the two provinces still have lots of other things in common -- including a broken economic system and a natural environment under threat. Plus nice older folks who are willing to risk arrest on behalf of younger generations.

Tuition is unlikely to be the Alamo for British Columbia progressives. For the movement to capture broader appeal in Quebec, the issue will have to morph and evolve. All this as Quebec's election deadline draws closer. Whatever happens next, there's still much to learn from our francophone sister.