What happens when you give a team of 14 UBC landscape and architecture students and three UBC planning students the challenge of imagining how people will get around when Vancouver becomes a truly sustainable city in the year 2050? 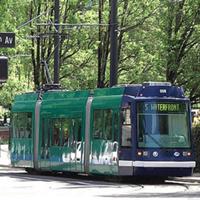 Why a Streetcar Is Something to Be Desired

We started by acknowledging that lately Vancouver has adopted an ambitious goal: by 2020, over 50 per cent of all trips in the city will be by biking, walking, or transit. This will put Vancouver in the same league as Copenhagen and Oslo, lofty competitors for this achievement. It's not impossible. Right now more than 40 per cent of Vancouverites' daily trips are via biking, walking and transit.

But in order to raise that figure to more than half of all trips, it seems judicious to examine how we move in this city, how our movement patterns got the way they are, and how we might use what is already working as the launching pad for something that works even better in the future.

So, next we studied the weave of the city's existing neighbourhoods and roads.

Most of Vancouver is oriented around its arterial streets -- Hastings Street, Commercial Drive, 41st Avenue, Cambie Street, Dunbar Street, Main Street, and many more. These key byways are the legacy of a time when moving around the city was impossible if you couldn't pick up a streetcar near home. Stimulated by the outward extension of streetcar lines, our neighbourhoods grew laterally from the tracks, with neighbourhoods gradually assuming an identity based on their service area. Thus the area we now know as "Point Grey" is composed of the blocks lying no more than a five-minute walk from the 10th Avenue streetcar. The area served by the Dunbar Street streetcar became know as "Dunbar," the area known as "Kerrisdale" includes blocks no more than a five-minute walk distance from the 41st Avenue streetcar, and in the "Hastings Sunrise" area the homes lie within a five-minute walk of the Hastings Street streetcar line.

Cafes, social clubs, clothing stores and pubs eventually lined each of these streets, forming the common centre for everyday life. To this day, if you ask a Vancouver resident where the heart of their neighbourhood is, they will likely name the former streetcar street at the center of their district. However, if you ask them where the edge of their neighbourhood is, their answer is likely to be more hazy.

Over time these main arteries became taken for granted, and in some cases abused. Widened many times to accommodate the increasing demands of the car, and hollowed out along many sad stretches to make room for parking lots, portions of these streetcar focused centres often became little more than auto sewers -- places no longer suitable for meeting friends, but engineered pipe systems designed to speed you and your car somewhere presumably better.

Fortunately, Vancouver's original streetcar grid left such a strong imprint that many arterial streets survived this auto-centric onslaught. The West End "U" of former streetcar streets, a U shaped by Davie, Denman, and Robson Streets, still combine to form one of North America's most vibrant civic realms and provide the West End with much of its defining character. Dunbar Street in Dunbar still accommodates serendipitous chats on a bright Sunday morning, and Hastings Street in Grandview-Woodland still throbs with the same vibrancy that it must have in 1920. In fact, our experience of the city echoes our earliest modern way of getting around, the streetcar.

Rise and fall of the streetcar

What does this history mean for us today?

Consider that until the advent of the electric powered streetcar, Vancouver was pretty much isolated to an area within a 15-minute walk of Victory Square. Things changed quickly after 1883 when Ernest Wiener von Siemens perfected a system of overhead wires capable of delivering electrical power to a moving vehicle: a streetcar. By 1890 the Vancouver Electric Railway and Light Company was formed, and just a few short years later the developed area of the city increased by over 1,000 per cent. Previously remote forests and farm fields, which covered the city south of downtown, could now be developed for housing. And they were. So much cheap land was made suddenly accessible that average city workers could, for the first time in history, live in their own houses on their own land.

Like most early streetcar companies, the Vancouver Electric Railway and Light Company was both enormously profitable and vertically integrated. They were in the business of everything from building hydroelectric generation plants on Indian Arm (our area's first hydro plant and still in operation), to supplying street lights, to developing and selling housing within the service areas of their streetcars. This corporate behemoth rivaled the power of the Vancouver city government, which might help explain why no tears were shed when streetcar companies ran into financial difficulties. Their troubles occurred when residents finally had an alternative way to get around: the car. Introduced in large numbers by the 1920s, the car proved so powerful that in a matter of only two decades Vancouver streets were jammed with them, making the smooth movement of streetcars no longer possible.

Vancouver, like most North American areas, faced with the cost of maintaining and extending a rail system that was already in financial trouble, opted for the car over the streetcar, and tried to make transit vehicles operate more like automobiles. Steel-wheeled vehicles gave way to rubber-tired buses capable of riding on the newly-paved streets without the need to further extend and maintain a system of steel tracks.

The enormous influence of the auto industry played a part as well. Vancouver officials, not unlike officials in most other North American cities, were offered favorable deals by the makers of rubber-tired vehicles in exchange for a guarantee that at the end of their last run the city's streetcars would be burned. What to us seems like a shocking waste was justified by companies who did not want secondhand streetcars being shipped to other markets where they might compete with rubber-tired buses. Thus the burning of streetcars was an explicit requirement of the contract. Photos of burning streetcars from many cities litter the Internet. The image below is a record of our own version of this once commonplace ritual.

While the demise of the streetcar is, for many, heartbreaking for romantic reasons, their loss produced other unintended consequences. In recent years, B.C. citizens have been struggling to decrease the amount of carbon dioxide we put into the air. Every city in the province is required by law to come up with a plan that will, by 2050, reduce our greenhouse gas (GHG) production by 80 per cent. For us in B.C., transportation produces more GHG than any other sector, and the bulk of that comes from the ordinary activity of citizens just going to and fro each day.

Interestingly, during the period when our transportation needs were met by the streetcar, our GHG production for transportation was essentially zero. All the energy for the system came from GHG zero hydroelectric sources. With the advent of the petroleum fueled  private automobile, our per capita production of GHG skyrocketed. But the shift from streetcars to diesel powered buses also contributed.  A diesel powered bus produces more GHG per rider (assuming average loads) than does a Toyota Prius (assuming 4 passengers, details here).

Unfortunately this means that even if we could move the bulk of our car trips over to buses, we may not solve the GHG problem. We would certainly slow our per capita rate of GHG production, but not nearly by the 80 per cent required by law.

If we are serious about meeting our targets, it seems that the GHG produced by transit vehicles will need to be addressed. And since most of our transit trips in the region are by bus, and likely to remain so, the GHG profile of the humble bus must rightly be part of the discussion.

How to get to a sustainable Vancouver

With all this in mind, our UBC studio of students and instructors concluded that there were a few obvious rules to follow when thinking about sustainable transportation for Vancouver.

First, back to the streetcar future. Whatever is done must accept that the city is still, and likely always will be, organized around its streetcar arterials. Every neighbourhood depends on them, almost all of our merchants run businesses on them, and most of our job sites are near them.

Second, streak for zero greenhouse gas emissions. Our transit system must eventually be GHG zero, or nearly so. Moving all trips from cars to diesel fired buses only slows, but does not stop, our over-dependence on fossil fuels and the toxic exhaust they generate. It is logical, given our regions abundance of hydroelectric power, to start a process of switching to electrically-powered transit.

Third, make more destinations close by. To minimize unnecessary movement, each neighbourhood should become more diverse over time. Neighbourhoods with good-paying jobs, ample services, and a variety of affordable house types, reduce the necessity for traveling long distances from home: to get to the store, to work, to play. This transformation is already happening in areas like Kitsilano, where population has been increasing for decades, where many new apartment/condo units have been supplied, where every bungalow can be converted into a three-family strata unit if the owner desires, where virtually every single family home contains a reasonably affordable rental unit, and where, as a result, commercial enterprises and neighbourhood services have steadily grown. As a consequence, with so many things they need near at hand, Kitsilano residents use the car less than they once did, walk more than they once did, use transit more than they once did, and travel much shorter distances for what they need than before.

These three rules: use what you have, make it GHG zero, and put things close, provide the jumping off points for the design work that follows, and a logical public realm framework for a more sustainable city.

Next Wednesday: Energy use and the city of Vancouver. What's form got to do with it?