I've recently floated the idea that there's room for a third party of the middle in B.C., and have been inundated (well, some people wrote... hell, a few folks have voiced opinions) such that I thought I should flesh out my thoughts and await another avalanche of responses. 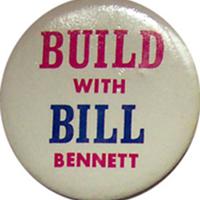 Why the Death of the Liberals Won't Matter

The expression of political opinion as left or right goes back to the French Revolution, referring to the seating arrangement in parliament; those who sat on the left generally supported the radical changes of the revolution, including the creation of a republic and secularization. Those on the right were satisfied with the status quo.

In B.C., the left has been associated with the NDP, and recently, the right with the Liberal party; thus the NDP are seen as strong on social programs and weak on business management, while the right is the other way around.

For 31 years, the voters preferred a sort of hybrid called Social Credit, led by Bennetts I and II from 1952 to 1986. The successor to Bennett II, Bill Vander Zalm, was seen by many within the party as taking it too far to the right, making way for the surprising success of the Gordon Wilson-led BC Liberal party. The reason the Social Credit party was so popular until Vander Zalm is that it occupied the centre, marginalizing the right into an ineffective Conservative party, and forcing the NDP to fight for their recently successful movement to the centre.

Change, indeed dramatic change, came with the demise of Vander Zalm's administration, resulting in the emergence of the Liberal party as a centre party under Wilson, while the right was shoved together in a lump as Socreds and reformers. The Socreds collapsed so completely that a "fencepost with hair could have won, and in fact a fencepost without hair did." (I've used that joke a lot and hope that Mike Harcourt has a laugh because it arose out of an irresistible, but by no way malicious, tickled funny bone.)

The fact is, the 1991 election was "won" by Mike Harcourt and the NDP not because of a sudden conversion to socialism by the voter, but the collapse of the Socreds and the surprising occupation of the centre by the Wilson Liberals. In 2001, a scandal-ridden NDP (whose sins were to pale into insignificance after Gordon Campbell took over) were all but wiped, leaving the traditional political boundaries so blurred they were unrecognizable.

Politics, like nature, abhors a vacuum and always seeks the proper balance between left and right. In B.C.'s case, that also meant a buffer party in the middle which would, in the past, mean a party that freely pinched ideas from its rivals, forcing the NDP further left and the right further right.

What, then, do we have now?

We have a left unable to lead and present itself as a government in waiting, and a right which is the most unpopular government, if not of all time, certainly since the 1952 coalition which W.A.C. Bennett I drove from power. There is nothing in the centre, leaving an abhorred political vacuum which cries out to be filled, meaning a ripe time for a party of the centre.

Before addressing the challenges of a third party, can the Liberals and NDP prevent this happening? If so, how?

The NDP leadership, so far as we can determine, wants to occupy the centre-left but is having a serious case of political indigestion. It has a leader who wants to move her party towards the centre, but whose tentative utterances have encouraged dissent from many of the party's "Young Turks," while not helping her image with the traditional conservative wing of the party that never liked her much in the first place. At least, this is what appears to the public, and in politics appearance always trumps facts.

The NDP have often trotted out one of their favourite slogans -- they being the party of slogans -- attributed to Tommy Douglas. Namely, that when the government is collapsing, the opposition should just stand back and let it happen. This is nonsense. That's the very time the opposition can stake out positions clearly and firmly.

Unfortunately for the reformers, Carole James is evidently a disciple of the Douglas doctrine.

After Gordo goes, then what?

The Liberal party must, of course, get rid of Campbell as fast as it can, but this doesn't erase the problem if only because there is no leader on the horizon that isn't associated with the Campbell serial scandals. Carole Taylor has all but taken herself out of the game as she has accepted the job of chancellor of Simon Fraser University for three years. Diane Watts, the popular mayor of Surrey, seems uninterested.

It's very difficult to see how the Liberal party can recover its traditional role as champion of the centre.

What, then, of the centre?

In politics, six weeks is an eternity, and what I say in this regard must be seen in light of that aphorism.

At present, I see two people who have the ability to raise money and to set up 85 constituency organizations, not to mention a corporate management team for the party -- namely, Gordon Wilson and Chris Delaney. I know both of them well and believe that if they could get together, form a party, cobble together a mission statement, put together a party program, elect a leader, thereafter working together, they could put together a party that would be in contention.

As in everything, overcoming inertia is the problem. An anecdote about Churchill is illustrative of this problem.

Back in the 1920s he wanted to paint, and his ambition was simplistic. As he put it: "... experiments with a child's paint-box led me the next morning to produce a complete outfit in oils." Unfamiliarity with technique could not lessen his determination; discipline and lessons would have to wait. Yet a sense of awe seemed to impose restraint. The budding artist was caught by the wife of Sir John Lavery (distinguished leader of the Glasgow School of Painting) tentatively handling a small brush.

"Painting!" she exclaimed. "But what are you hesitating about? Let me have a brush -- the big one." She showed him that a brush was a weapon to subdue a blank, intimidating canvas by firing paint at it to dazzling effect. Never again did he feel the slightest inhibition.

Thus it is with Mr. Wilson and Mr. Delaney -- the canvas is there to be filled, you have the equipment and knowledge, and all you need do is overcome inertia.

How about the Greens?

On a final note, I've been asked, "What about the Green party?"

If we had a proportional representation system -- any variety of that -- then I would have a different opinion. The problem is that under first past the post, they can't even elect an MLA, much less form a government. The same must be said about the BC Heritage party which clearly is a Christian, right-wing party without a prayer of electing anyone, in spite of their devotion to the Creator.

For the political junkie, the next few months will be fun to watch.