For the first two weeks of March, Palestine's supporters around the world focus public attention on Israel's continued brutal occupation of the West Bank and its even more vicious siege of Gaza. They do so through Israeli Apartheid Week and this is the sixth year the public education campaign has taken place. 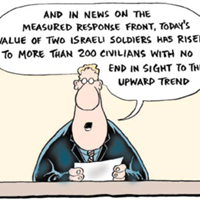 One of the principal signs of its success has been the ferocious counter-campaign by supporters of Israel. Like so much of the history of Israel's powerful propaganda machine, the facts about Israeli separation of Jews and Arabs -- also known as apartheid -- are beside the point. The response to criticism of Israel has always been one of self-righteous indignation and outrage, accompanied by charges of anti-Semitism.

Yet there is absolutely no doubt that the system of separation of Arabs and Jews can be compared with the apartheid system in South Africa. Indeed, many experts on how the apartheid system was run claim that Israel's system of hafrada, or separation, is far more brutal and deliberately humiliating than anything devised by the racist regimes of Pretoria.

Even members of the Israeli political elite use the term apartheid to describe the system they administer -- the latest being the current defence minister (and former prime minister) Ehud Barak who stated: "If there is only one political entity, named Israel, it will end up being either non-Jewish or non-democratic... If the Palestinians vote in elections, it is a binational state, and if they don't, it is an apartheid state."

Shulamit Aloni, who once served as Minister of Education under Yitzhak Rabin, wrote: "The state of Israel practises its own, quite violent form of apartheid with the native Palestinian population." And in November of 2007, Israel's Prime Minister Ehud Olmert said: "If the day comes when the two state solution collapses, and we face a South African style struggle for equal voting rights, then as soon as that happens, the State of Israel is finished."

Michael Ben-Yair, Israel's attorney general from 1993 to 1996, described Israel's approach to the Palestinian territories captured in 1967 as apartheid in 2002:

Those who compare Israel's actions in the West Bank and Gaza to the apartheid regime often express shock at how much worse the Israeli system is. Nothing like Israel's settlement structure in the West Bank ever existed in South Africa. The illegal settlements are all connected by a special set of paved highways. As Shulamit Aloni describes: "Wonderful roads, wide roads, well-paved roads, brightly lit at night--all that on stolen land. When a Palestinian drives on such a road, his vehicle is confiscated and he is sent on his way." Some four million Palestinians are governed not by civil law but by Israeli military law, which is enforced by soldiers. On a daily basis, Palestinians face systematic and deliberate humiliation at hundreds of these road-blocks.

At literally every turn, Palestinians are treated as people with no rights. Israel controls water in the West bank and while its citizens have swimming pools, Palestinians are on water quotas -- prohibited even from digging wells. Ask blacks in South Africa if they were ever faced with a 20-foot concrete wall dividing their communities, their land and the roads connecting their villages. Palestinian land is still being seized for use by Israeli settlers, their orchards bulldozed.

And what of Arab "citizens" living in Israel? This "fact" of Arab citizenship is at the core of the myth of Israeli democracy, for even here a milder form of apartheid prevails. Arab citizens can vote but must carry ID cards saying they are "Arab." Most are obliged to live in exclusively Arab villages that are not allowed to expand; they cannot work for the Israeli government; their schools are starved for funds while Jewish schools are well endowed. Arab political parties cannot advocate for a change in the Zionist system of differential treatment based on race. The current Israeli foreign minister, Avigdor Leiberman has mused publicly about expelling all Arabs from Israel proper -- reflecting the widespread view that Israeli Arabs are a "demographic threat."

This morally repugnant state of affairs is often described as Israeli exceptionalism. Israel and its supporters use the horror of the Holocaust to argue that nothing critical can be said about Israel because Jews went through a unique horror -- a horror so unimaginable that no other injustice can compare, nor be used to criticize the survivors, no matter what they do to survive. Israel has always painted itself as fighting for mere survival while under siege by hostile Arab states. Yet, with the fourth most powerful military in the world, and with the U.S. as its ally, and no Arab state (even Iran) seriously considering attacking it, this argument is not convincing.

Israelis and their supporters point to anti-Semitism and hateful declarations by Arabs as justification of their system. But they cannot admit their own hatred. Israelis, in order to rationalize their colonial system, must maintain the belief that as the Chosen People, by definition, they are incapable of evil.

And yet evil there is. What sticks in my mind about the first Palestinian Intifada were the dozens of young Palestinian boys, some as young as nine or ten, who were summarily executed by Israeli soldiers (some just teenagers themselves) for throwing stones. These were not kids caught in a crossfire -- they were, on many occasions, shot in the middle of their foreheads by snipers. In his book Palestinian Children and Israeli State Violence, James A. Graff reported that between Dec. 8, 1987 and Dec. 8, 1989 Israel soldiers and settlers killed 138 children (16 years of age and younger) by gunfire. The numbers of children seriously injured by gunfire and beatings was approximately 30,000.

Serious injury of children was state policy. There is video evidence on YouTube of Israeli soldiers holding down a young man, stretching out his arm and smashing it with large rocks. They were following Defence Minister Yitzhak Rabin's orders to Israeli soldiers called the "break their bones" policy. What other democratic country in the world has ever undertaken such a grotesque campaign?

I often wondered just what the snipers thought as the crosshairs found the centre of the child's forehead. What was going through his (or her) head and what did they feel afterwards? I didn't get the answer for 20 years -- not until the reporting of the deliberate targeting of civilians in the invasion of Gaza in December of 2008, when over 900 civilians died (an action for which Israel has been accused of war crimes).

'Just because you can

In March of 2009, reports in Israeli newspapers revealed the atrocities committed by Israeli troops -- described by the soldiers themselves in a group discussion at an Israeli college and transcribed by a professor. One of the incidents involved a mother and two children who misunderstood the instructions of the Israeli soldiers and turned the wrong direction when ordered to leave their house. An Israeli sniper shot all three dead on the spot. Said the squad leader: "The lives of Palestinians, let's say... is something very, very less important than the lives of our soldiers."

In another incident, reported by the Toronto Star's Oakland Ross: "a company commander is said to have ordered his troops to shoot and kill an elderly woman walking past them. 'You do not get the impression from the officers that there is any logic to it -- to write 'Death to the Arabs' on the walls, to take family pictures and spit on them -- just because you can,' said a squad leader who opposed the order."

The Israeli newspaper Haaretz at the same time discovered T-shirts made for soldiers who had served in Gaza. According to a BBC report on the discovery, "One, printed for a platoon of Israeli snipers, depicts an armed Palestinian pregnant women caught in the crosshairs of a rifle, with the disturbing caption in English: '1 shot 2 kills.'"

As shocking as these revelations were, they should come as no surprise. For if the Israeli political class harbours these overtly racist feelings, they also model them for their soldiers. The Oct. 18, 1973 entry of the British House of Commons in Hansard records the reporting of MP R.J. Maxwell-Hislop to the House on his experience as part of a parliamentary delegation to Israel. He had been a lunch guest of the foreign affairs committee of the Knesset.

"After lunch, the chairman of the committee spoke with great intemperance and at great length about the Arabs. I was constrained to say, 'Dr. Hacohen, I am profoundly shocked that you should preach of other human beings in terms similar to those in which Julius Streicher spoke of the Jews. Have you learned nothing?' I shall remember his reply to my dying day. He smote the table with both hands and said 'But they are not human beings, they are not people. They are Arabs.'"