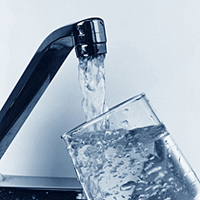 The Myth of Canada's Water Abundance

It may be hard to appreciate the West Coast rain whilst in the throes of the winter drench. But consider that, someday soon, we're likely going to have to start paying for what comes out of the tap, and suddenly the sodden sky holds more promise.

Municipalities and industry are increasingly looking at ways to conserve water. Residents in most areas of the province (like Kelowna) already have to pay for it, and more cities in the cloud-shrouded Lower Mainland are seriously considering water metering to curb our enormous consumption rates. (On average, Metro Vancouver residents use more than 340 liters of water per day. That's about the equivalent of two and a half bathtubs full.)

We need some of that for drinking, cooking and washing, but approximately 30 per cent goes right down the toilet, putting unnecessary strain on water treatment facilities.

Olympic developments have kickstarted the province's strategy to reduce water use. The toilets at the Richmond skating oval are filled with rainwater, funneled off the facility's roof.

The Vancouver Convention Centre treats wastewater to irrigate its green roof garden, and it's the first building in Canada built with a filter system to desalinate sea water. The Olympic Athlete's Village will reduce potable water use by 40 to 50 per cent with low-flow plumbing and large underground rainwater cisterns that supply irrigation and toilet flushing needs.

Some of these features are already mandatory at a residential level. The provincial building code now requires low-flow toilets and other water-saving appliances in new construction and renovations. And reusing rainwater for outdoor purposes -- like watering the lawn or garden or washing patio furniture -- is fairly straightforward. You just need a catchment system and a hose.

"The potential for outdoor use is great. . . and has really quite an effect on a city's water use," says Bob Burgess, owner of Gulf Islands Rainwater Connection. "That water is easy to collect and no one worries too much about the cleanliness."

Vancouver even subsidizes the cost of rain barrels for city residents.

Burgess says the bulk of his business is installing potable water systems -- "from roof to tap," he calls them. He estimates he does 30 to 40 of these a year, mostly in rural areas or on the Gulf Islands where water is scarce.

Bringing rainwater indoors is a bit trickier, he notes, because this province is "a little bit behind when it comes to allowing water to be used indoors." The regulations are inconsistent from municipality to municipality.

Although the B.C. building code restricts the discharge of non-potable water into sinks or toilets, grey-water recycling is allowed under the plumbing code for non-potable applications.

"Some places allow it and some places, as soon as it comes indoors, they want an engineer stamp on the plans" says Burgess, "which doesn't change the system but does make it more expensive."

These systems aren't cheap to begin with -- they cost anywhere from eight or nine hundred dollars to three or four thousand. But Burgess says his business is expanding, not only in the Gulf Islands, but also places where water quality is low.

"It turns out there's places all over -- there's big areas in the valley, in Langley, for example -- where the groundwater is so polluted. . . they don't feel like using it in their house. There's certainly lots of demand out there."