[Editor’s note: This is the second feature in a six-part series exploring life and risk on the Lower Mainland’s floodplain, the stretches of flat land in the region between the Fraser River and the coast. If you haven’t read it yet, we invite you to read the first piece in the series, 'When the Flood Hits, Will We Be Ready?']

When Carolyn Carter first moved into Delta’s Boundary Bay neighbourhood, she had nightmares she’d wake up after a winter storm to find water lapping at her door.

These fears weren’t helped by the fact that her beautiful new home, just three blocks from sandy Centennial Beach, was considered uninsurable against flood damage by local providers.

Her husband, John, shrugs off these worries. He loves living close to the water and walks on the beach every day. The skies go on forever and the wind in your ears can almost be mistaken for thoughts, he jokes.

But Carolyn, who uses a wheelchair, isn’t convinced. In an interview with The Tyee she said she always wonders if this should be the year they move away — to get out before the neighbourhood floods and property values crash.

Carolyn and John are both in their 70s and have lived in the neighbourhood for 10 years. The Boundary Bay neighbourhood sits on the water on the east side of Tsawwassen, looking across the bay at White Rock. They say their neighbours have similarly accepted the risk of flooding as a price to pay to live there. John compares this to people who live in earthquake- or wildfire-prone areas. You know the risk exists but you love living there anyway, he says.

And there is a risk of flooding, for this neighbourhood and many parts of the low-lying municipality that sits at the mouth, or delta, of the Fraser River. Delta is protected by 67 kilometres of dikes which were largely built in 1890 and bolstered from 1948 through the '80s. The dikes are built to withstand the worst flood in written history, the 1894 spring freshet flood. The municipality has also done many other small-scale projects to reduce flood risk throughout the years, like building pump stations.

Predicting what a large flood would look like in Delta is a bit like trying to predict what the large earthquake will be like when it hits the Pacific Northwest. It’ll be bad — but there are things we can do to prepare the community to minimize damage.

The municipality faces two main flood risks: from the Fraser River, during spring freshet runoff when rain and warm temperatures speed up snowmelt in the mountains and swell the rivers; and from the Pacific Ocean during a storm surge or from sea level rise.

There are also a lot of variables that will determine how much damage a flood can cause when it eventually shows up. For example, where did the water come from? Has infrastructure somehow failed? Has the city been able to respond?

In summary: it’s bad, and Delta is at risk of extreme flooding in the future if it doesn’t update its flood strategy.

The good news is that Delta has a massive dike upgrade project in the works to increase the height of all of its dikes by around 0.6 metres by 2050 to keep up with sea level rise, says Steven Lan, Delta’s director of engineering. B.C. predicts there will be half a metre of sea level rise by 2050, one metre by 2100 and two metres by 2200.

It’s also working on a pilot project known as the “living dike” that aims to bolster the foreshore and the marshy habitat that thrives there. When waves break over intertidal habitat the force of the wave is absorbed by reeds and eelgrass beds. Without an intertidal zone the wave slams directly against a dike or seawall. So foreshore is good, but as sea levels rise and that habitat is unable to migrate inland to shallower waters because of dikes and seawalls, it’s drowned. The pilot project is a partnership with Surrey and the Semiahmoo First Nation and is still in the planning stages.

Now for the bad news.

To start, it’s going to be incredibly expensive — far beyond what a single municipality could pay for. Lan says raising 67 kilometres of dikes around half a metre will cost around $350 million. Seismically upgrading the dikes will cost an additional $300 million. Preparing the community for 2100 levels of just over one metre is a project worth around $2 billion, he adds.

In 2015 a Fraser Basin Council study found the majority of dikes in the Lower Mainland did not meet provincial seismic codes. Delta followed up with its own study and found similar results.

That could mean that when the Big One hits, dikes in the Lower Mainland settle by 20 to 30 centimetres, says Steve Litke, director of water programs at the Fraser Basin Council.

Another major problem is that the Lower Mainland’s diking system “was never designed to act as a stand-alone system of protection, but in some places has become the default flood mitigation measure,” notes a 2021 report from the Fraser Basin Council. (The report is part of an initiative to create a unified regional flood strategy, which we reflected on the challenges of in Part One and which we’ll explore later in the series.)

Dikes aren’t meant to be stand alone because “all dikes pose a risk of failure during a major flood,” it continues. Dikes also “encourage” development in flood-prone areas because developers can pressure the local government to allow them to develop flat, accessible real estate that has been dry for everyone’s living memory.

Climate change is also throwing a wrench in everyone’s adaptation strategies. It’s speeding up sea level rise and changing what seasons carry the biggest flood risk, Litke says. Currently freshet season is in the spring when warm temperatures and rain speed up snowmelt. But as temperatures warm, there will be less snow and heavy rainfall in the fall and winter, which could cause the Fraser River to swell. This will coincide with the coastal storm surge season from November to January, which will create larger waves because of sea level rise.

That all sounds pretty alarming. But Delta’s Lan maintains he has faith in the infrastructure that’s kept the municipality flood-free for some 130 years. “Proper design and construction of these dikes should serve us well,” he says. It’s also important to remember city staff monitor flood risks and can deploy resources, like sand bags, to respond to threats, he says.

It hasn’t failed, but hasn’t been tested

One thing Delta is not considering is a managed retreat, where communities un-build infrastructure and move it to higher ground to allow rivers or marshes space to spread out. Managed retreat is often touted as a viable long-term solution to sea level rise, but Litke says a lot of Delta’s industry sits on the edges of the Fraser River and it isn’t possible to move it.

Ritzy houses in the Boundary Bay neighbourhood are another asset that are unlikely to pick up and move as sea levels rise. But Carolyn says some neighbours have redone their homes so their living room sits on the second storey — meaning their view of the water won’t be blocked off by a new, higher dike.

Delta’s adaptation strategy says it’s planning on raising the foreshore to 4.8 metres above sea level, from the current 4.1 metres, by 2050. 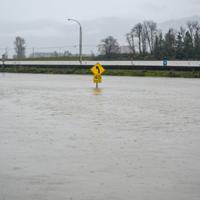 The city will also be taking the same careful approach with its waterfront neighbourhoods as its rural agricultural ones, Lan adds. For now, floods are beyond living memory and that means it’s hard for a city council to dedicate limited funding to flood infrastructure instead of a hospital or road improvements, Litke says. But the catch-22 is that without proper flood mitigation infrastructure, the new hospital or roads could be damaged by a flood.

One big thing to remember when we’re talking about the risk of flooding is that, “the Lower Mainland’s diking system hasn’t failed significantly, but it also hasn’t been tested significantly,” Litke says.

Next in the series: we walk along the ‘great wall’ of Richmond, a perimeter dike keeping water away from the island city whose engineers are working hard to protect.