The Vancouver School Board has recently created new guidelines for oversight of student clubs and their social media accounts — to the consternation of a local high school newspaper staff that previously complained about facing censorship at the school and district levels.

The district says these procedures codify powers and responsibilities school teachers, administrators and the district already have.

But the students of the Griffins’ Nest, Eric Hamber Secondary School’s student newspaper, say these guidelines violate students’ freedoms of the press and expression under Section 2(b) of the Canadian Charter of Rights and Freedoms.

The Griffins’ Nest says it takes issue with the following aspects of the Extracurricular Activities and Social Media Guidelines.

“It would be really concerning if we got an email saying, ‘hand over the password to your Twitter and Instagram,’ which we've received confidential tips through and no one is supposed to see but us,” said Spencer Izen, current editor-in-chief of the Griffins’ Nest.

The Griffins’ Nest is also concerned that the rules could stop the paper from using advertising and fundraising to cover editorial costs like publication and freedom of information requests, and prevent students from publishing personal essays that contain their personal information and result in an overall loss of student editorial control.

Representatives from the student newspaper are also uncomfortable about how the school and district could interpret what was “antithetical to educational values” and whether students are considered to have the “intellectual maturity” to participate in a student newspaper club.

Earlier this year the Griffins’ Nest went public with allegations the district tried to censor and intimidate them on several occasions.

For example, the district told the Griffins’ Nest their teacher sponsor should screen all club communications, from emails to freedom of information requests to articles and social media posts.

The district also forwarded freedom of information requests from the Griffins’ Nest’s to their school principal, and told the students such requests would take away from their fellow students' education.

These actions led to Spencer Izen and Jessica Kim, the Griffins’ Nest’s managing editor, to push for a provincial Student Press Freedom Act.

Given the ongoing tension between the district and the newspaper, Izen told The Tyee the paper believes the extracurricular and social media procedures were created to censor student media and the Griffins’ Nest.

On May 11, deputy superintendent David Nelson told members of the district’s policy and governance committee that the provincial School Act mandates that principals have responsibility for student clubs and their social media accounts.

“Should there be anything posted that causes concern or harm or was inappropriate, it would be the expectation of the community at large that the principal deal with it, and the principal would be accountable for it,” he said, adding district legal staff have reviewed the procedures.

During the meeting Nelson denied the procedures would impede press freedom. The Tyee requested an interview with Nelson, but he was not made available. Instead, district communications sent an emailed statement to The Tyee.

“The role of educators in the school has been and remains to be to provide support and oversight for students,” the statement read, adding the Griffins’ Nest is just one of hundreds of student clubs in the district.

The Tyee sent a followup email to the district seeking specific responses to the issues the Griffins’ Nest raised about the administrative procedures, including a response to students’ belief that the development of the new procedures was informed by tense interactions between the paper and the district.

In a second emailed statement, district communications staff denied the procedures violate the Charter of Rights and Freedoms and that any censorship has happened or is intended with these procedures.

“One of the values schools seek to model is to instil respect for the principle of freedom of expression. The District’s oversight of student newspapers and other clubs is an important responsibility, and action to limit expression would never be taken without sound and specific reasons.”

In response to a similar statement the district gave to CTV on Friday, the Griffins’ Nest tweeted a detailed timeline, of alleged censorship and intimidation attempts by their school administration and the district from December 2020 to May 2022.

The Griffins’ Nest is not opposed to being regulated as a student club, Izen and executive editor Stephen Kosar told The Tyee. Their issue is with guidelines that infringe on their charter rights.

“There needs to be a proper balance there that affords student journalists the freedom to report as they need to, for their community, with the fact that they're a club,” Izen said.

“And that balance does not include anything like having access and dictation control over a social media account or the files that the student newspaper has.”

The Canadian Association of Journalists, BC Civil Liberties Association and Student Press Law Center share the Griffins’ Nest’s concerns over the impact of these administrative procedures.

In a letter sent by the Student Press Law Center to the district, the American non-profit said the procedures subject student journalists to “regular and unfettered censorship, undermine Vancouver schools’ efforts to produce civic-minded critical thinkers, and discourage student journalists from pursuing the exemplary — and sometimes unpopular — journalism in which they already engage.”

Another letter, co-written by the BC Civil Liberties Association and the Canadian Association of Journalists, said the procedures empower the district to control and censor all communication between the public and student media.

“These policies appear to prima facie violate student journalists’ right to freedom of expression,” the letter reads, noting the B.C. School Act is subordinate to the Charter of Rights and Freedoms.

“The BCCLA and CAJ call on the VSB to amend their policy to bring it into alignment with the Charter of Rights and Freedoms, to appropriately consult with students before any future policy is enacted, and to cease any further actions which impede student journalists ability to engage in uncensored and independent journalism.”

In their emailed statement to The Tyee, district communications staff said they will respond directly to the BC Civil Liberties Association and the Canadian Association of Journalists regarding their concerns.

Nelson reached out to the Griffins’ Nest editorial board, proposing a meeting to discuss their concerns about the administrative procedures. The students agreed, and Izen says the district has floated June 21 or 22, during the second last week of the school year, as potential dates.

But the BCCLA’s concerns extend beyond what these procedures could do to press freedom, policy director Meghan McDermott told The Tyee. 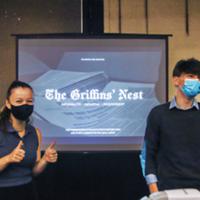 Inside a Student Newspaper’s Battle Against Censorship

“We’re also concerned for clubs and for students, and also for teachers who are involved in other kinds of clubs in schools, as well,” she said.

Unless teachers are well-informed about students’ rights, they may “err on the side of caution,” McDermott said, and censor any club social media posts they think could breach the guidelines or other district rules.

“So in the end we end up with less dialogue going on, less expression happening,” she said.

Kosar, who will take over as the Griffins’ Nest editor-in-chief in September, believes that if nothing changes with the administrative procedures, the relationship between the district and the newspaper will remain fraught.

“I have a great editorial team next year that is also fully prepared to help protect our rights and freedoms guaranteed under the charter,” he said.