A lot of Canadians spent the weekend furious about the Freedom Convoy truckers who arrived in Ottawa and immediately launched a kind of slow, ongoing riot.

There they were, parking around the Cenotaph, prancing (and pissing) in the snow on the Tomb of the Unknown Soldier, waving Nazi flags, hanging an anti-vax post on the Terry Fox monument, mooching free meals from a soup kitchen, and screaming at the media covering the protest. If they didn’t also create a superspreader event, it wasn’t for lack of trying.

Of course most of us were shocked and appalled, saying so on social media. I joined others in marvelling at how the protesters had sabotaged their own cause. As a grizzled veteran of protests, marches and demonstrations going back to the 1950s, I could see they were doing everything wrong. How could such jerks gain popular support?

Then I realized this is how it starts. Not with widespread popularity but a charged minority displaying the intensity of their destructive impulses. Their thin edge of the wedge, if not dealt with firmly, could drive Canada towards anti-democratic illiberalism and the breakdown of public trust in its institutions.

If we regard the truckers as ordinary protesters, they’re hopeless. Ever since the days of the On to Ottawa Trek in the Dirty Thirties (and the Bonus March in the U.S.), protests have been premised on a simple principle. The government isn’t living up to its own laws, or its laws undercut its claims of justice and fairness for all. The protest is intended to bring out thousands of people to shame the government into respecting to its own proclaimed beliefs in justice, equality, freedom, the rule of law.

Legitimate civil disobedience raises the ante: your laws are unjust, the protesters say, and we’ll go to jail if that’s what it takes to embarrass you into changing them.

The truckers disregarded all those principles. The reasons for their cross-country convoy morphed from day to day, hour to hour. “Freedom” from vaccination vanished; now it was the whole public health response that had to go, and never mind that the federal government can’t much influence the provinces on such issues. Then a strange alliance of the Governor General and the Senate was supposed to oust Justin Trudeau and... what? Hand the country over to the truckers?

Maybe that’s what happens when you stop teaching Canadian history and civics. The truckers didn’t seem to have a very clear sense of any kind of history. They did know that swastikas trigger people, like a thumbtack on the teacher’s chair. They wanted to “own” us, get a rise out of us, by telling us how little they shared of our values.

We’ve seen this show before, but not here. The American political establishment nearly fainted when Donald Trump started calling Mexicans rapists and drug dealers. That was only one of his scandalous pronouncements, each worse than the last — and each bringing more followers into his ranks. Political orthodoxy held that you’d lose votes by insulting voters; Trump showed otherwise, and politicians around the world took notes.

What’s more, Trump could insult and undermine American institutions, and persuade Americans that some weird Deep State had taken over their country, from the media to the FBI to the electoral system. That, said Trump, was why so many people were getting a raw deal.

Of course it didn’t make sense, unless you thought you’d had a raw deal. But that was the attraction: you didn’t have to marshal arguments, cite authorities, or otherwise try to persuade skeptics. You could just dump on anyone who didn’t agree with you. If you did pretend to argue, you could do so with the “bad faith” Jean-Paul Sartre describes in his book Anti-Semite and Jew; you could mock the rational person’s trust in evidence and logic. And you would have the advantage of “hate as a faith.”

So the truckers and their supporters have behaved very badly to challenge Canadians who respect and trust in their institutions. You admire Terry Fox? We couldn’t care less. You respect our fallen soldiers? Piss on them. You’re in the media? We don’t need to give you a sound bite about what we want — just a few seconds of abusing you as a stooge of a lying newspaper or broadcaster.

And of course the same disrespect goes out to every health-care worker, every teacher, every civil servant. Make their jobs harder, push them to burn out and quit so the hospitals and schools and governments can’t function as well. No one knows what’s true anymore, which is a precondition for fascism.

The Freedom Convoy, then, is a deliberate provocation, a test of the municipal and federal governments: We’ll show you what we think of you and your sacred institutions. Now what are you going to do about it?

On Sunday the Ottawa police announced that “several investigations” were underway into “the desecration of the National War Memorial. Terry Fox statues, threatening/illegal/intimidating behaviour to policy/city workers and other individuals and damage to a city vehicle.”

They did not explain why the desecrators and threateners hadn’t been arrested on the spot, or at least pepper-sprayed and “kettled” as many other demonstrators have been in the past 20 years.

Meanwhile, the truckers have also obliged Trudeau and his family to move to a secret location. (His father would have said “Just watch me,” and called in the army.) Jagmeet Singh has confined himself to severe disapproval of “vile, violent and hateful behaviour.”

The truckers have also effectively neutered the Conservative Party of Canada. Erin O’Toole could neither reject them nor endorse them, just as he couldn’t come out for or against vaccination. Meanwhile, Maxime Bernier’s People’s Party of Canada was in the thick of it and likely signing up plenty of members.

So far, then, the Freedom Convoy is doing very well by carrying out its lampoon of a serious demonstration. The institutions of government and media have responded feebly if at all, as they did in the Jan. 6 insurrection at the U.S. Capitol. 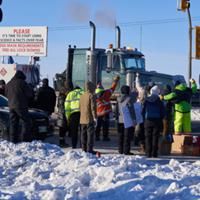 A BC Ex-MP, Western Separatists and that Truck Protest

A few law-breaking desecrators may eventually be rounded up and jailed, but they will be tolerable casualties. The truckers and their supporters will use them to raise more money for new protests. Provincial governments will hem and haw about local protests and harassment of health-care workers and teachers, but they won’t dare collar the leaders and let them reflect in jail on the error of their ways.

Our governments seem to have made a disastrous misjudgment — that the truckers and their supporters are an angry spasm to be endured until their energy can be cooled out and co-opted through politicking as usual. The convoy should be seen instead as a test run for more institution destabilizing efforts, increasingly well-funded and well-organized by those who seek to transform Canada.

Where the truckers and their supporters are violating laws, they should be promptly arrested. Such arrests, continued as long as needed, would show Canada and the world that we’re serious about peace, order and good government — and public health as well.

Justice delayed is justice denied for such people. Worse yet, justice is both denied and discredited for the rest of us.